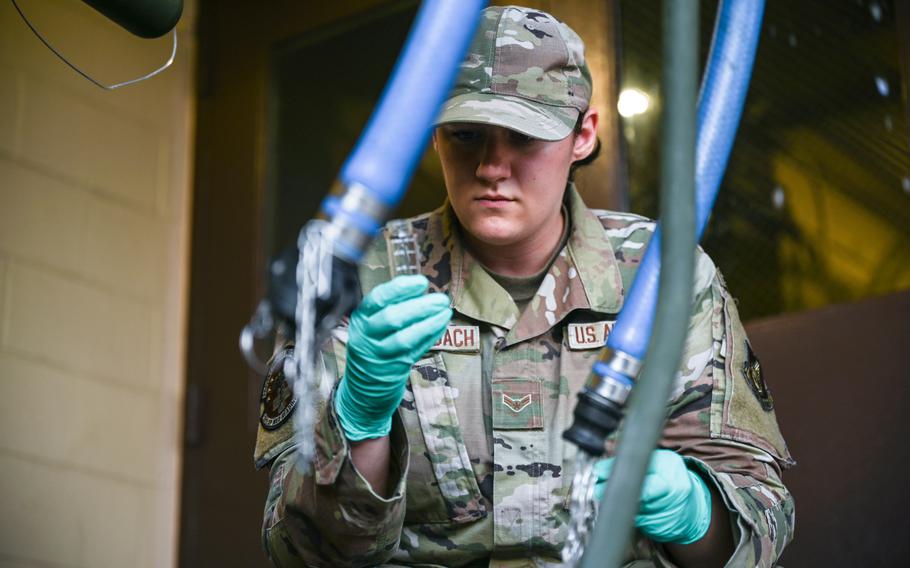 FORT SHAFTER, Hawaii — The Navy has determined that its water well near Joint Base Pearl Harbor-Hickam was contaminated with jet fuel from a Nov. 20 spill near the Red Hill Bulk Fuel Storage Facility, the commander of U.S. Pacific Fleet said Friday.

“We know now with a high degree of confidence based on water testing results analyzed at a certified, independent third-party laboratory that that contaminant is JP-5 jet fuel,” Adm. Samuel Paparo said during a virtual briefing to members of the Hawaii State Legislature.

The briefing also included representatives of the Hawaii Department of Health and Oahu’s Water Supply Board.

Tests indicate that the fuel found in the well came from a relatively new spill, he said.

“So from the test results and engineering analysis that we’ve done today, it appears some quantity of JP-5 jet fuel entered the Red Hill well in a single event, likely from the Nov. 20 spill, and then subsequently pumped from that well and distributed throughout those portions of our Navy’s water distribution system.”

Subsequent testing confirmed that water from the Red Hill well was contaminated with petroleum. The well — one of three that supplies the Navy’s system — is near the vast Red Hill collection of underground tanks built during World War II that hold about 150 million gallons of fuel.

The Navy has not used the Red Hill well since Nov. 27.

The Red Hill fuel tanks have experienced multiple leaks over the past decade, and despite growing calls by many Honolulu residents for the facility’s closure, the Navy maintains that its operation is essential to national security.

On Monday, the Hawaii Department of Health issued an emergency order requiring the Navy to empty the tanks. The Navy has not agreed to do so.

Paparo told lawmakers the Navy is “confident that this event was not a result of a leak from one of the Red Hill tanks.”

The fuel in the Red Hill well was from a water-fuel mixture “from a fire-suppression drain line in the lower tunnel” of the fuel storage facility, according to a Navy news release on Nov. 22. The service removed about 14,000 gallons of the mixture from the tunnel over the two days following the discovery of the spill on Nov. 20.

A timeline for cleaning out the fuel from the well and the distribution lines was laid out for lawmakers by Rear Adm. Dean VanderLey, head of Naval Facilities Engineering Systems Command Pacific.

“Our first step in cleanup is to directly flush a full-system volume of clean water through our distribution system,” he said. “This system volume is about 25 million gallons. How fast the system-flush can be completed is obviously very dependent on how fast we can flush. It could be completed as quickly as four days or it could be much longer.” VanderLey said.

The Navy is working with the health department to ensure the flushing is conducted in an environmentally safe way, he said.

The next step is to flush each individual home and facility, he said.

The Navy and Army — which administrates one large community affected by the contamination — is paying hotel bills for hundreds of affected homeowners who have temporarily relocated.

“After evaluation of the testing results, we will work closely with the department of health and other stakeholders to be able to declare our water safe and get people back in their homes,” he said.

The goal is to have this completed by Christmas, he said, but admitted that it was a very aggressive time frame.

He said he was “confident” that the Red Hill well was contaminated by the Nov. 20 leak, which was a “singular event” cleaned up within 30 hours.

In the short term, the Navy is coordinating with the department of health to directly pump out whatever petroleum floats atop the well water, he said.

On Thursday, the Navy contracted to bring two huge water filtration units to Hawaii from the mainland capable of filtering up to 10 million gallons a day, he said.

Getting them to Hawaii will require eight to 10 flights on large cargo planes, he said.

“Then there is significant effort to assemble, connect and get them operating,” he said. “But despite those challenges, my goal is to have them up and operating within two to three weeks.”