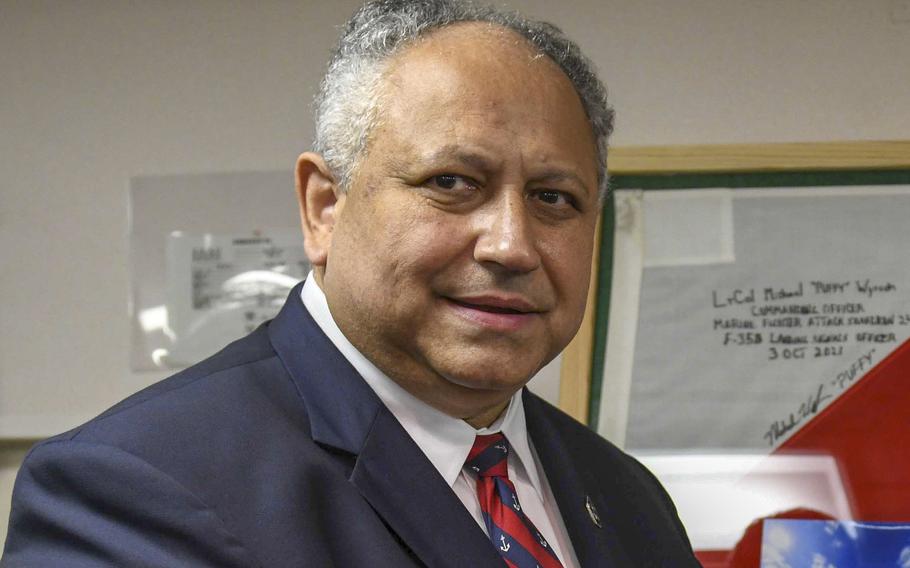 HONOLULU (Tribune News Service) — In an effort to assist some families that cannot take showers or drink their tap water because of contamination concerns, state education officials are drafting a plan that could include opening up locker room showers and toilets at the three public high schools near the Navy’s Red Hill Bulk Fuel Storage Facility.

The state Department of Education received a request Thursday from state Sen. Glenn Wakai (D, Kalihi-Salt Lake-Aliamanu ) to accommodate families who cannot bathe or drink water from their taps.

“We definitely want to help, and we’d already been looking into how we can support families, “ said DOE spokeswoman Nanea Kalani. “There are a lot of logistics to look into to see what would make sense, “ including staffing and athletic schedules at Radford, Moanalua and Aiea high schools, Kalani said. “It would be pretty limited and small-scale.”

Wakai said at a news conference, held Thursday near the entrance to the Aliamanu Military Reservation, another assistance idea, which includes allowing affected families to stay in Oahu hotels, needs further coordination with hotel and tourism officials.

Numerous residents who receive their water from the Navy’s Joint Base Pearl Harbor-Hickam water system have complained of symptoms that they worry are linked to the water.

The Navy said Thursday night that it has detected petroleum products in its Red Hill drinking water well, which has been shut down since Sunday. An official said tests for contamination throughout the Navy’s joint base water distribution system have come back negative, however.

Wakai spoke alongside five other state legislators, two City Council members and the chairman of a neighborhood board—all representing constituents in or around the Red Hill area. Nearby, an electronic billboard in front of the AMR guard shack read, “Water Issue, “ as oversize military tanker trucks—labeled with “potable water “ signs—entered the military reservation.

Navy Secretary Carlos Del Toro is scheduled to be the keynote speaker for Tuesday’s event commemorating 80 years since the Dec. 7, 1941, attack on Pearl Harbor, raising optimism among some county and state leaders that addressing Red Hill concerns will become a bigger issue for the Navy.

“It is at a crisis level, “ state Rep. Aaron Johanson (D, Fort Shafter-Moanalua Gardens-Aliamanu ) told the Star-Advertiser. “Everyone is beyond frustrated, “ he said. “It’s not like this is out of nowhere and unforeseen.”

Made above water Constructed during the World War II era, the underground facility includes 20 tanks, which can collectively store up to 250 million gallons of fuel. The tanks are perched 100 feet above a major drinking water aquifer for Oahu. The facility has been under increased scrutiny and regulatory review since 27, 000 gallons of fuel spilled from one tank in 2014.

Councilwoman Radiant Cordero said she and Council Chairman Tommy Waters have introduced Bill 48, which would require a permit to operate large underground storage tanks—but only if the operator can demonstrate there will be no leaks during its operating life.

“The reason why we are all standing here is the weight of concerns from our constituents, “ said Cordero, whose district includes Aliamanu, Hickam and Ford Island. “They are fighting for their basic necessities.”

Councilwoman Carol Fukunaga, whose district includes Fort Shafter, Moana ­lua and Aiea, said the City Council and Honolulu Board of Water Supply have been concerned about Red Hill for years.

“We stand here today in the midst of a contested-­case hearing the Sierra Club and Board of Water Supply has brought, “ Fukunaga said. “And so we are hopeful that this new set of circumstances is something that brings us all together so we can find solutions as quickly as possible with our state, county and federal counterparts.”

Lt. Gov. Josh Green wrote to Gov. David Ige on Thursday urging Ige to issue “a declaration of a public health emergency, “ and offered the services of Par Hawaii, which operates Hawaii’s only refinery as well as Hele and 76 gasoline stations in Hawaii.

“The goal would be to remove all fuel from the tanks ... while the 20 tanks can be safely assessed without jeopardizing the aquifer, “ Green wrote. Par could take up to one-third of the existing fuel in the Red Hill tanks, Green wrote, adding, “The remainder can be removed expeditiously, if we work with other private partners.”

Eric Wright, senior vice president and lead executive for Par Hawaii, told the Honolulu Star-Advertiser, “At this point we don’t have all of the details on the fuel transfer process, but we are committed to helping out in this situation and stand ready to assist the state and our community to explore potential fuel storage alternatives to Red Hill.”

In a statement issued Thursday, Ige said, “The announcement that a petroleum product has been detected in water samples from the Navy Water System is deeply disturbing. Military families are members of our community. I’m concerned for the health and safety of those living in the affected areas and understand their need for timely and accurate information.”

Further, Ige said he has “urged the Navy to conduct a thorough investigation immediately and to take every precaution necessary to keep the community safe. I’ve also ordered the State Department of Health to continue independent testing and to be prepared to take immediate action to protect our drinking water.”