Russia’s call-up splits EU; Ukraine says it shows weakness
Russia’s rush to mobilize hundreds of thousands of recruits to staunch stinging losses in Ukraine is a tacit acknowledgement that its “army is not able to fight,” Ukraine’s president said Sunday. 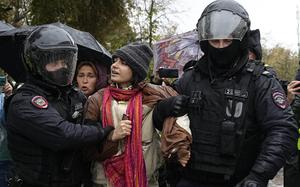 Protesters scuffle with Russian police as draft inflames tensions
Russia vowed “protection” for Ukrainian areas annexed by its staged referendums. More than 800 protesters against the Kremlin’s mobilization were detained, a group said. 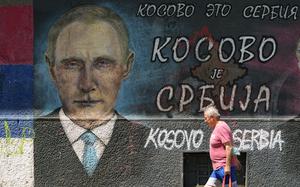 Serbian minister defends deal with Russia amid criticism
Nikola Selakovic said at a news conference Sunday that the agreement is a "technical" one and relates to bilateral ties, but not security issues. Many Ukraine mothers go it alone with their children
Some women have thrown themselves into volunteering. Others are consumed by child care, financial worries and family expectations. Germany secures more gas shipments as Scholz visits Gulf
Germany is trying to wean itself off energy imports from Russia in response to the invasion of Ukraine, while avoiding an energy shortage in the coming winter months. 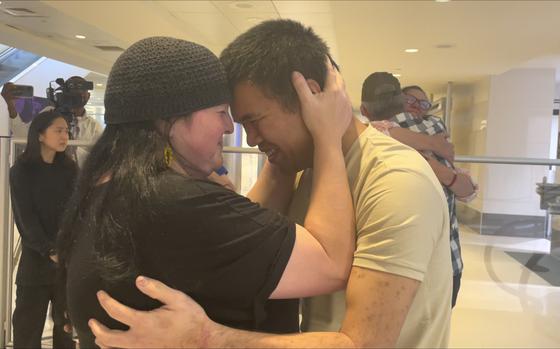 ‘We got our miracle’: Freed Americans back home in Alabama
Two U.S. military veterans who disappeared three months ago while fighting with Ukrainian forces have arrived in their home state of Alabama. West works to deepen sanctions after Putin heightens threats
How do American leaders and their allies intend to respond if President Vladimir Putin seeks to escalate his way out of a bad situation on Ukraine's battlefields, and makes good on renewed threats of annexing territory or even using nuclear weapons? Energy crisis empowers Europe's populists harnessing anger
Across the European continent, many groups are making political capital from the economic impact of the conflict in Ukraine as food and energy prices soar. 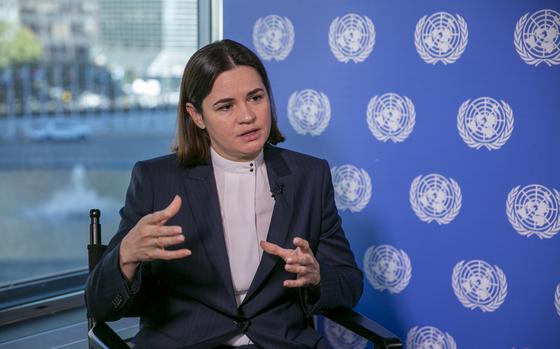 Belarus opposition says fate of country, Ukraine intertwined
Belarus' opposition leader says the fate of Belarus and Ukraine are "interconnected" and both countries have to fight together for their very existence because Russia doesn't view them as independent sovereign states. World opinion shifts against Russia as Ukraine worries grow
The tide of international opinion appears to be decisively shifting against Russia, as a number of non-aligned countries are joining the United States and its allies in condemning Moscow's war in Ukraine and its threats to the principles of the international rules-based order. Occupied Ukraine holds Kremlin-staged vote on joining Russia
A Kremlin-orchestrated referendum got underway Friday in occupied regions of Ukraine that sought to make them part of Russia, with some officials carrying ballots to apartment blocks accompanied by gun-toting police. Kyiv and the West condemned it as a rigged election whose result was preordained by Moscow. US has sent private warnings to Russia against using a nuclear weapon
The United States for several months has been sending private communications to Moscow warning Russia’s leadership of the grave consequences that would follow the use of a nuclear weapon, according to U.S. officials.
More Europe news