Rank-and-file soldiers begin Special Forces-style security missions across Indo-Pacific
The goal of the 12-soldier team on its first mission to Papua New Guinea is to assess local forces’ logistics capabilities, such as their ability to keep their vehicles running, along with a supply of spare parts. Information like that will be passed on to the next U.S. troops who go to the country. 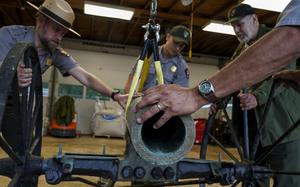 Civil War cannons that may have been at Battle of Bull Run get new home
The cannons had sat outside the old Fairfax County Courthouse since about 1904, until they, and a memorial to a Confederate officer, were removed last November by order of the county supervisors. Airmen are now allowed to wear baseball-style tactical camouflage caps
The Air Force has introduced a flurry of changes this year, including longer hair styles for women, revamped physical training uniforms and shorts for aircraft maintainers in hot climates.

‘Blood will be on his hands’: Biden must order evacuation of Afghan allies, lawmakers say

Bipartisan infrastructure pitch gains steam on Capitol Hill as Biden weighs in from Europe
A bipartisan group of senators sketching out an infrastructure proposal is preparing to expand their base of support on Capitol Hill, even as they continue to haggle over how to pay for billions of dollars in new spending in line with President Joe Biden's vision for a massive overhaul of the nation's public works system.

After year of unrest, Portland strives to repair reputation
Last year, as a portion of its downtown was consumed by nightly protests that often turned violent and resulted in clashes with federal agents, former President Donald Trump and his administration labeled Portland an "anarchist jurisdiction."

British lawyer Karim Khan sworn in as ICC’s chief prosecutor
British lawyer Karim Khan was sworn in Wednesday as the new chief prosecutor for the International Criminal Court, pledging to reach out to nations that are not members of the court in his quest to end impunity for atrocities and to try to hold trials in countries where crimes are committed.

German platoon ordered from Lithuania amid misconduct probe
Germany’s Defense Ministry said Wednesday it has ordered a platoon stationed in Lithuania as part of a NATO mission to return home immediately amid allegations of serious misconduct.

Fed says inflation is growing faster than projected just 3 months ago and moves up expectations for rate hike
The Federal Reserve expects inflation will climb to 3.4% this year, higher than the central bank’s previous forecasts, while also projecting for the first time that there could be two interest rate hikes in 2023.

Security flaw found in 2G mobile data encryption standard
Cybersecurity researchers in Europe say they have discovered a flaw in an encryption algorithm used by cellphones that may have allowed attackers to eavesdrop on some data traffic for more than two decades.

EU members agree to lift travel restrictions on US tourists
The EU has no unified COVID-19 tourism or border policy, but has been working for months on a joint digital travel certificate for those vaccinated, freshly tested, or recently recovered from the virus. EU lawmakers endorsed the plan last week.

EU urges members to stay united as ties worsen with Russia
The European Union’s testy relations with Russia are likely to get worse and the bloc’s 27 member countries must ensure that Moscow does not divide them, the EU’s top diplomat warned Wednesday.
More Theaters news