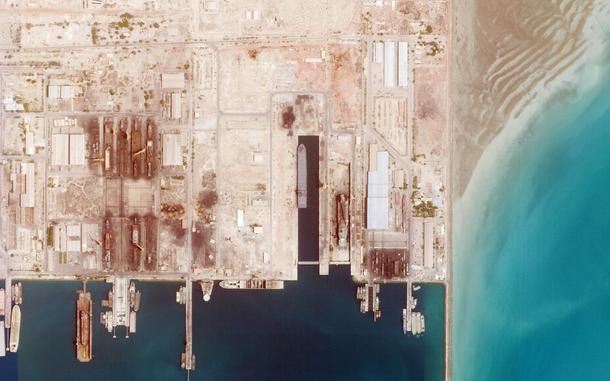 Ship expands Iran Revolutionary Guard’s reach to new waters
Analysts say a new support ship Iran is building will expand its naval presence in waters vital to international energy supplies. The ship also provides a large, floating base from which to run the small fast boats that largely make up its fleet designed to counter the U.S. Navy and other allied forces in the region. Economic protests challenge Iran’s leaders as hopes for nuclear deal fade
Street protests in several Iranian cities in recent weeks, sparked by the soaring costs of food and other staples, have underscored the challenges facing Iran’s government from global shortages caused by war in Ukraine and the continued imposition of Western sanctions as talks to restore a 2015 nuclear deal remain stalled.

1.1 million Afghan children could face severe malnutrition
Though aid agencies' massive humanitarian program succeeded so far in staving off outright famine the past six months, they are struggling to keep pace with relentlessly worsening conditions.

Pakistan’s ousted prime minister urges followers to banned rally
Protest marches have raised fears of major violence between supporters of ousted Prime Minister Imran Khan and security forces. The government of Khan's successor, Shahbaz Sharif, has banned the rally and warned Khan he could face arrest if he went ahead with the demonstrations.

US has not been asked to help in probe of reporter's killing
The U.S. State Department says neither Israel nor the Palestinian Authority has formally requested U.S. assistance in the investigation of the killing of a Palestinian-American reporter in the West Bank two weeks ago.

Biden’s Iran envoy says nuclear talks aren’t dead but time is running out
The top U.S. envoy to the Iran nuclear talks says that efforts to revive the 2015 agreement are faltering but that he believes offering Tehran “limited” sanctions relief could still salvage the accord and provide the basis for a broader deal.

Israel says 5 Palestinians arrested in alleged attack plots
Israeli police and the Shin Bet security service said in a statement that five Palestinian men planned a shooting attack against a far-right member of the Knesset and kidnappings of Israeli soldiers.

Thousands attend funeral for slain Guard colonel in Iran
Iran blamed "global arrogance," which is code for the United States and Israel, for the killing of a senior Revolutionary Guard member, as mourners took to the streets in Tehran on Tuesday chanting “death to Israel.”

Taliban say deal signed with UAE firm to manage airports
The Taliban announced a deal Tuesday allowing an Emirati company to manage three airports in Afghanistan after the fall of the country's U.S.-backed government. However, the United Arab Emirates did not immediately acknowledge the deal.