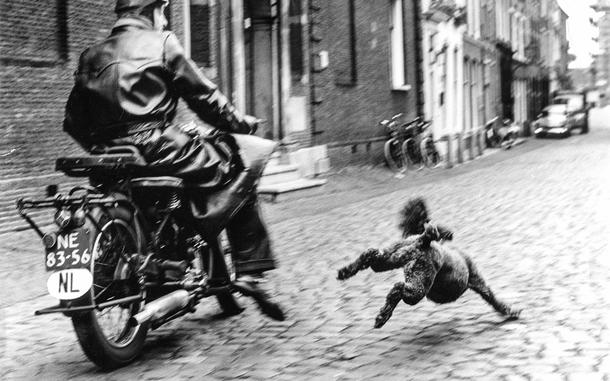 Bark and ride, 1961
Haarlem, Netherlands, July, 1961: While photographing a wall plaque for a story about the Pilgrims in Holland, Stripes photographer Gus Schuettler heard barking behind him. He turned and quickly shot this study in canine and mechanical motion. Chuck Yeager at Ramstein Air Base, 1970
Ramstein Air Base, Germany, January 7, 1970: Brig. Gen. Charles E. Yeager, vice-commander of the 17th Air Force, gets a pat on the hand from Vera Starodvorsky during their reunion more than a quarter-century after she hid him from the Germans in occupied France when his plane was shot down in March, 1944. 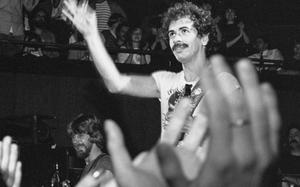 Ready to race, 2006
Kadena Air Base, Okinawa, Japan, February, 2006: Kindergarten students at Bob Hope Primary School on Kadena Air Base line up and prepare to race 100 feet as they celebrated the 100th day of school. Kindergarten classes at the school spent three hours going from one activity to another in which they learned the various ways to count to 100.

Gen. Omar Bradley at Frankfurt, 1947
Frankfurt, Germany, September, 1947: Gen. Omar N. Bradley, left, head of the Veterans Administration, reviews the troops at Rhein-Main Air Base. Bradley’s whirlwind tour of the country whose World War II defeat he helped bring about (through his leadership of the Normandy invasion three years earlier) took him from the Frankfurt area to southern Bavaria.

Muhammad Ali at Augsburg, 1976
Augsburg, West Germany, May, 1976: Muhammad Ali works his way through a crowd of admirers at Sheridan Barracks in Augsburg. The heavyweight boxing champ spent 10 hours at the base, but he had already made plenty of friends among the military community in Germany a few days earlier by buying 2,000 top-priced tickets to his fight at Munich against Richard Dunn (which he won) for U.S. service members.

Escort across the border in Berlin, 1961
Berlin, August, 1961: A little girl who was in West Berlin when the infamous Wall went up is led back into the Eastern sector by a Vopo, or East German policeman.

Redstone exercise at Stuttgart, 1962
Stuttgart, Germany, July, 1962: A 7th Army crew lifts a Redstone missile into firing position during an exercise at Panzer Kaserne in Stuttgart. The 70-foot rocket — added to the USAREUR arsenal in 1958 — had a range of up to 200 miles, and was noted for its accuracy and dependability. A version of the Redstone was used to propel America’s first two astronauts, Alan Shepard and Gus Grissom, on their Mercury sub-orbital flights in 1961.

Procession at Lourdes, 1964
Lourdes, France, May, 1964: Pilgrims marching in a candlelight parade near the Rosary Church are seen in a time-exposure photo. Every year, thousands visit the grotto marking the spot where, in 1858, young Bernadette Soubirous said the Virgin Mary appeared to her. Miraculous cures have been attributed to the waters at the shrine’s spring.

Guarding a Bosnian bridge, 1997
Bosnia and Herzegovina, March 1997: Local workers put the finishing touches on the bridge between Celic and Gajevi as Russian and American soldiers stand guard. The U.S. Army’s 65th MP Company had been on patrol for more than two weeks amid continued violence against Muslim resettlers in the area.

Down time in Bosnia, 1998
Bosnia and Herzegovina, June 1998: Spc. Matt Popalisky of the 142nd Field Artillery National Guard from Fayetteville, Ark. reads a book at transient tent quarters on Eagle Base. Popalisky was marking time before heading back to the States in a few days.

President Bush in Somalia, 1993
Beli Dogle, Somalia, January 1993: President George H.W. Bush takes a question from one of the more than 100 U.S. soldiers and Marines who gathered to meet him at an air base in central Somalia. Bush, who stopped in the African nation on his way to a summit meeting with Boris Yeltsin in Russia, shared a meal of MRE field rations with the troops.

USS Iowa fires its guns, 1985
Baltic Sea, October, 1985: The USS Iowa fires its 16-inch guns during maneuvers in the Baltic Sea. The battleship drew large crowds of visitors during its stops in Scandinavian ports, and also attracted several Soviet and East German spy ships while in open water. Although U.S. officials wouldn’t openly characterize the exercise as a message to the Russians, Danish Defense Minister Hans Engell said it “lets them know that the Baltic Sea is not a Soviet lake.”
More Archive photo of the day news