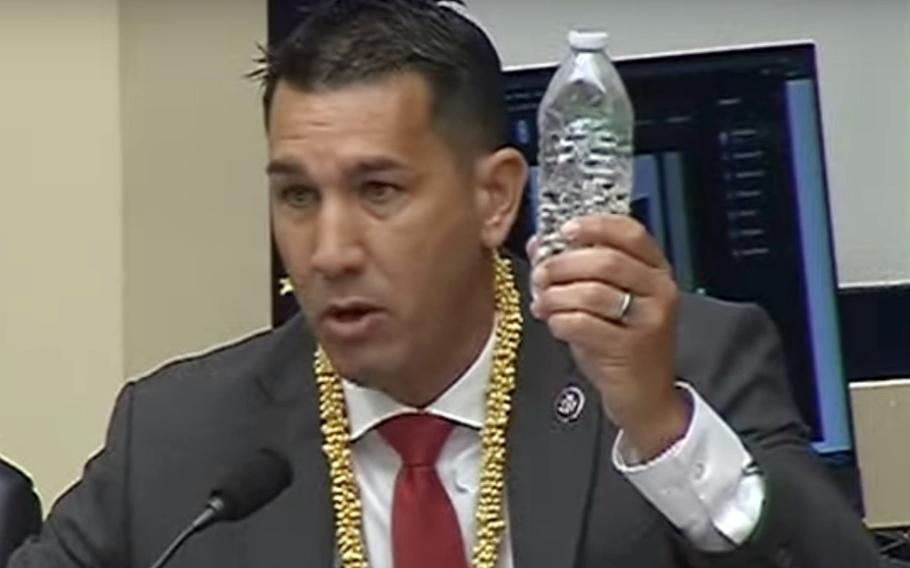 FORT SHAFTER, Hawaii — The U.S. Navy is facing “a crisis of astronomical proportions in Hawaii” as nearly 100,000 service members and their families deal with petroleum-tainted water in military housing on Oahu, a Hawaii congressman said at a House Armed Services subcommittee hearing Thursday.

“The Navy’s water system is contaminated with petroleum,” Rep. Kai Kahele said during the hearing focused on the logistics of operational energy. “Joint Base Pearl Harbor-Hickam’s water systems are entirely shut down.”

“This is a crisis that we have not seen in Hawaii,” he said.

Since Sunday, the Navy and Hawaii Department of Health have collected and sampled scores of water samples from the roughly 7,000 homes in military communities that get their water from the Navy water system.

The health department announced Wednesday that preliminary testing on water from Red Hill Elementary School indicates the presence of petroleum. The school lies a couple of miles outside the joint base but uses the Navy’s water.

Samples have been sent to the mainland for testing capable of finding more minute traces of contamination.

During the hearing, Kahele held up a bottle holding tainted water he said he had collected during a visit earlier this week to one of the military families. His district includes rural parts of Oahu but not the joint base itself, according to his official website.

“I can tell you myself that if you smell this water, you would know that there is something wrong with this water,” he said.

The entire family, including their dog, had been experiencing illness, Kahele said. The mother had just been diagnosed with “chemical burns in her mouth,” he said.

The contamination has left many pointing to a history of leaks from the nearby Red Hill Bulk Fuel Storage Facility.

The World War II-era tanks that hold about 110 million gallons of fuel were carved into the mountain about 100 feet above an aquifer that provides roughly 25% of the island’s drinking water.

Critics have long called for the Navy to permanently close the site, but the Navy maintains that it is essential to national security.

“There have been concerns from the community for years about the possibility of leaks from Red Hill into the drinking water supply,” said Kahele, who according to his official biography is an airlift pilot for the Hawaii Air National Guard.

“And yet the Navy seems totally unprepared for the situation that is now impacting the military’s own service members and families,” he said. “What is happening on the ground in Hawaii right now is absolutely unacceptable. I understand the operational importance of the Red Hill facility to our military and our military’s readiness in the future. However, there have been three reported fuel leaks on Oahu over the past 20 months, and we need answers.”

Kahele posed pointed questions to Vice Adm. Rick Williamson, the deputy chief of naval operations for fleet readiness and logistics, who was among the military officials testifying at the hearing.

“Is it possible to make Red Hills safe for our water supply and community? If yes, how?” Kahele asked. And, he continued, could the tanks be drained and emptied, and if so, how would it be done and how long would it take?

Williamson had little to offer by way of answers.

“We are committed to find the facts, get to the root causes, and make the appropriate corrections to anything that we discover,” he said.

“As far as your questions go, sir, I’d love to take that for the record and come back to you with an answer,” Williamson said.