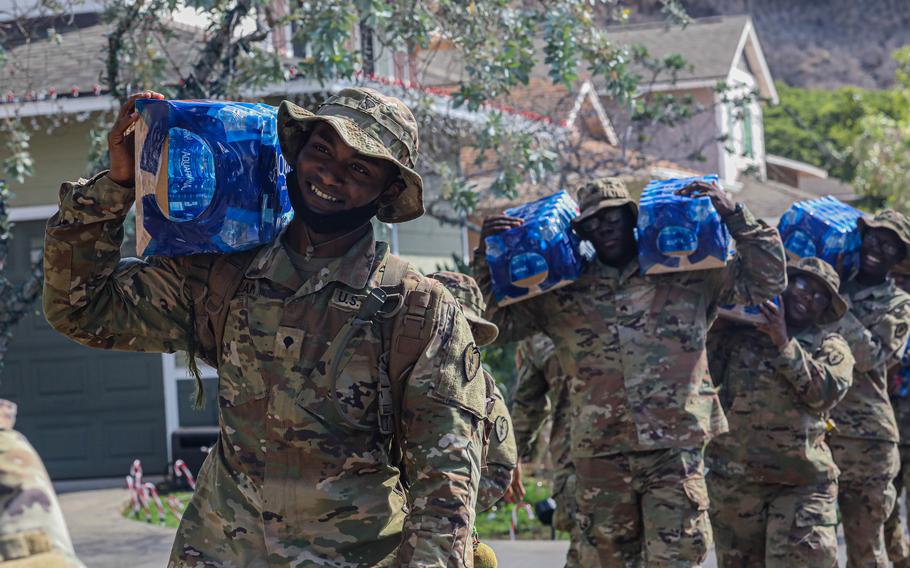 Soldiers with the 25th Infantry Division distribute water door-to-door at Aliamanu Military Reservation, Hawaii, Dec. 2, 2021. It is one of 10 military communities near Joint Base Pearl Harbor-Hickam affected by petroleum contamination of their drinking water. (Darbi Colson/U.S. Army)

The Navy and Hawaii Department of Health took additional samples near the Navy’s Aiea Halawa well, one of three the service uses to supply water to military housing communities on and around the joint base, the service said in a news release Thursday. The well had previously shown no signs of contamination.

The Navy received test results on the sample Wednesday.

The sample came from “an off-service section” of the water distribution system near the Aiea Halawa well, “and the Navy does not believe it indicates contamination” of that well, the news release said. The well has not been used since Friday, the Navy said.

Subsequent testing confirmed that water from the Red Hill well was contaminated with petroleum. The well is near a vast underground collection of fuel tanks used by the Navy. That well has not been used since Nov. 27, and the Navy is developing a plan to mitigate the contamination.

The Red Hill fuel tanks have experienced multiple leaks during the past decade, and despite growing calls by many Honolulu residents for the facility’s closure, the Navy maintains that its operation is essential to national security.

On Monday, the Hawaii Department of Health issued an emergency order requiring the Navy to empty the tanks, which hold about 150 million gallons of fuel, and to cease using the facility.

The health department said in a news release Thursday that the Dec. 5 test sample indicated levels of diesel fuel more than twice the safe limits set by the department.

“The level of this contaminant poses a public health threat and is considered unsafe to drink,” Kathleen Ho, deputy director for environmental health, said in the news release.

“This news is concerning — especially as the cause of the petroleum release into the Navy’s water system remains unknown,” she said.