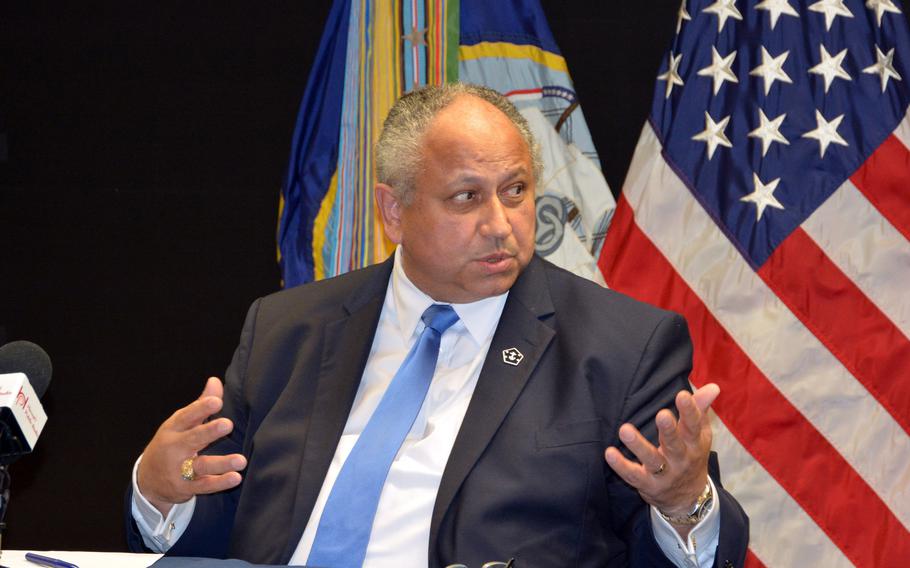 JOINT BASE PEARL HARBOR-HICKAM, Hawaii – Secretary of the Navy Carlos Del Toro is considering the permanent closure of the massive underground Red Hill fuel storage facility on Oahu in the wake of widespread petroleum contamination of nearby drinking water, he said Monday.

“We’re looking at all options, and all options are on the table, certainly,” Del Toro told reporters during a news conference at U.S. Pacific Fleet headquarters on the joint base.

“We’re looking at some very serious options here in the near future before I depart the island of Oahu,” Del Toro said. He arrived over the weekend and is slated to give the keynote address Tuesday at the commemoration of the 80th anniversary of the 1941 surprise attack on Pearl Harbor.

“I still need more time to meet with additional groups and look at additional facts before I make a determination of what steps I need to make in the near term in the next, let’s say, 48 hours before I leave the island,” he said.

The Navy suspended fuel-transfer operations from the underground tanks Nov. 27 as it began investigating complaints from Navy housing communities of foul-smelling tap water. For the time being, the service is using fuel from above-ground tanks.

Tests last week confirmed that the Navy’s Red Hill well, one of three that supply water to roughly 7,000 households on the Navy water system, was contaminated by petroleum. The well was shut down and isolated early last week.

Del Toro, Gilday and Russell Smith, the Navy’s master chief petty officer, have been talking with residents from the 10 military housing communities near the joint base affected by the contamination.

“The three of us are in Hawaii for one single reason, and that is to listen to those who have been affected and to understand what the root cause of the problem is,” Gilday said.

Affected residents have excoriated Navy officials during town hall meetings held the past week, with some saying the Navy did not initially take complaints seriously enough.

On Sunday, Capt. Erik Spitzer, the joint base commander, posted a stark apology on social media for telling residents early last week that their tap water was safe to drink.

“I can tell you at this point that there are no immediate indications that the water is not safe,” Spitzer wrote in a notification sent to residents Nov. 29 after initial testing. “My staff and I are drinking the water on base this morning, and many of my team live in housing and drink and use the water as well.”

At the same time, the Hawaii Department of Health was instructing residents to not consume the water.

“We truly thought the testing results indicated the water was safe to drink,” Spitzer said in the apology posted on the joint base’s official Facebook page. “We were wrong. I apologize with my whole heart that we trusted those initial tests.”

Del Toro told reporters he was committed to finding and fixing the contamination’s source.

“While we are getting closer to determining the root cause of the situation, there is an ongoing investigation that is led by U.S. Pacific Fleet into the cause of the incident,” he said. “Once that investigation is complete, we will review those findings and adjust our operating procedures as necessary.”

Del Toro said the Navy would “follow the evidence” to discover where the petroleum contamination came from.

He referred to two fuel leaks in May and early November connected to the World War II-era Red Hill Bulk Fuel Storage Facility, which holds about 150 million gallons of fuel.

“[T]he investigation is doing everything I believe it can to basically tie all of those pieces together to a conclusion as to where exactly the water supply was contaminated,” Del Toro said.

Pacific Fleet head Converse told reporters that petroleum found in the Navy’s water system possesses a figurative “fingerprint” that can be analyzed to track its source.