The bloody battle for Okinawa: Veterans recall the luck, grit that got them through
The Battle of Okinawa is one of the bloodiest and most tragic chapters of the Pacific war, claiming the lives of 110,000 Japanese troops, 140,000 Okinawan civilians and 12,520 American servicemembers. It’s etched in the memory of every survivor. Though their numbers are dwindling — most are in their early 90s — they all have stories to tell, including the moral quandaries they faced. 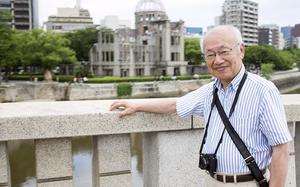 The rarely seen images of death and damage that survived Hiroshima
To help ensure that future generations never forget the horrors of nuclear war, a Japanese photography education organization is hosting a month-long photo exhibition with images that document the death and damage. These rare images survived censorship laws and were collected over several years for the 70th anniversary of the bombing. 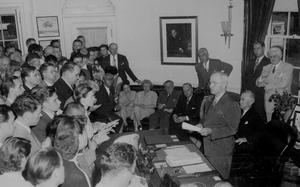 When the president said yes to the bomb: Truman's diaries reveal no hesitation, some regret
President Harry Truman’s decision to drop atomic bombs on Hiroshima and Nagasaki came with regret over the loss of life, but without hesitation.

Would Japan have surrendered without the atomic bombings?

August 1945: After years of 'leapfrogging,' Allied forces close in

Key moments during the battle for Okinawa

A-bomb crewmember: With 2nd bomb, 'we knew the war was going to end'

After fight to recognize Hiroshima's American victims, historian meets one of their relatives

After wartime terror and defeat, a life rebuilt around America
Toshi Tokunaga Cooper and her coworkers listened on the radio as Emperor Hirohito announced Japan’s surrender to the Allies on Aug. 15, 1945. It was the first time the Japanese public had heard his voice, and the news was devastating.

3 facts you may not know about World War II
From those who continued to fight after surrender to when Brazil declared war — here are three things that have drawn less attention than the epic struggles of Normandy, Stalingrad and the islands of the Pacific.
Major events in the Pacific Theater
From Iwo Jima to Okinawa, and onto Japan's final surrender aboard the USS Missouri, Stars and Stripes invites you to follow along with this interactive timeline.

Precision Fire Answer To Cave Tactics - U.S. Artillery Goes Underground
“Our artillery is wearing down the Japs and gradually destroying his guns and men. We are waging a ruthless process of extermination.”

Fighting Men With Tender Hearts – GIs Play Nurse To Oki’s Orphans
It is not at all a strange sight to see kids running around in cut-off GI woolen underwear or rompers made of fatigues, but Sally’s diapers made of green camouflage cloth really take the cake.

'Scoop of the century' was no boon for reporter who broke story
The end of World War II in Europe 70 years ago this week was a joyous occasion for virtually all Americans — save for the journalist who broke the surrender story, a scoop that turned him into a pariah.

Berlin rises from the ashes but ghosts of war remain
When World War II ended, Berlin lay in ruins. Half-starved survivors eked out a bare existence without food, heat, shelter and hope. Seventy years later, Germany has risen to the economic powerhouse of Europe.