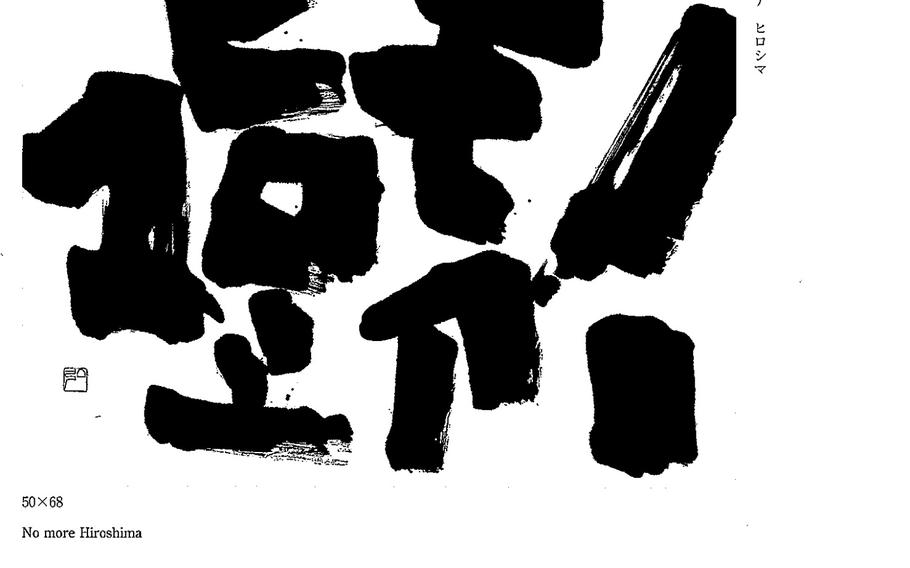 When summer comes Kids love to go in nude. But never let them strip bare; Little ones scorched black might; come to life again. (Courtesy of Hiromu Morishita) A retired calligraphy professor, Hiromu Morishita, 84, shows a picture he drew of the scenes he witnessed immediately after the atomic bomb was dropped in Hiroshima in August 6, 1945. About 80 students, including Morishita, were lining up near a bridge, which was located less than a mile from the epicenter when the bomb was detonated about 2,000 feet above the ground. (Chiyomi Sumida/Stars and Stripes) A retired calligraphy professor, Hiromu Morishita, 84, was exposed to an atomic bomb that was detonated in the center of Hiroshima in August 6, 1945. The temperature directly beneath the epicenter was said to be between 5,400 and 7,200 degrees Fahrenheit. (Chiyomi Sumida/Stars and Stripes) Hiromu Morishita, 84, a survivor of 1945 Atomic bombing of Hiroshima, holds his calligraphy work of ''No More Hiroshima'' in his published portfolio. (Chiyomi Sumida/Stars and Stripes)

In 1945, Hiromu Morishita was a 14-year-old student at Hiroshima First High School. With so many young Japanese men fighting for their country, Morishita and his classmates were mobilized as a work force for an aircraft parts factory. When materials ran out, they were assigned to tear down buildings to create a fire-control zone if Hiroshima were hit by U.S. bombers.

Tokyo already had been fire-bombed, along with dozens of other cities. Air raid alerts were part of Hiroshima’s emergency preparations, which also included building bamboo rafts in case a reservoir were attacked.

But Hiroshima hadn’t been hit, even though it was a military city. It made Morishita and his classmates curious – and scared. They didn’t know that Hiroshima was left intact so the U.S. could assess the impact of the atomic bomb.

On Aug. 6, Morishita was among 70-80 students lined up near the Tsurumi Bridge in Hiroshima’s Hijiyama district, waiting for their instructions for the day.

Suddenly, a bright light flashed. Instantly, I squatted down and covered my face with my hands. We had been instructed to do so to protect ourselves when we were bombed. Otherwise, we were told that our eardrums would burst and eyeballs would pop out.

A tremendous heat engulfed us. It was as if we were thrown into a gigantic smelting furnace. Then I was blown down by a blast and beaten into the ground.

I jumped into the water because my body was burning hot. Soon, people started coming into the water one after another. I looked up the sky. It was pitch black and the dust filled the air. The sun was glittering, but it was cold and dark as if it were a winter day.

There was an eerie silence. After a while, I crawled out of the water. Low and weak groans were echoing all over.

I had no idea where my classmates were. Then, I saw one of them coming to me. He asked me how he looked. I told him; ‘Your cap and clothes are burnt and the skin on your face is hanging like rags.’ He told me that I looked exactly the same.

Near the bridge rail, a badly burned horse was struggling to stand up.

I followed the crowd and walked toward an empty lot. There was a sea of flames all over. I walked up a path to the hilltop of Hijiyama, from which I could see the city. Flames were seen here and there as if heaps of sawdust were burning. Fire sirens were blaring.

I did not feel anything because I could not figure out what was actually going on.