When the president said yes to the bomb: Truman's diaries reveal no hesitation, some regret 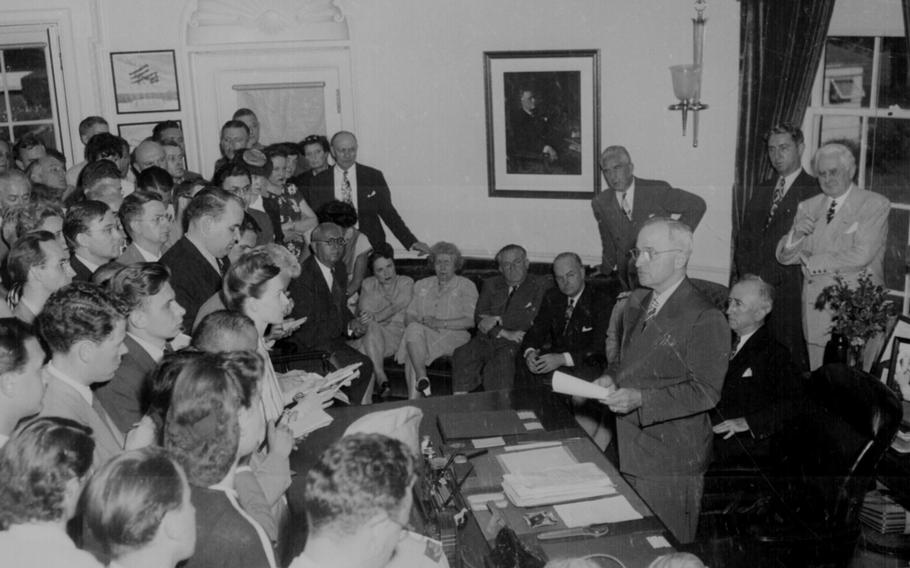 President Harry S. Truman announces Japan's surrender on Aug. 14, 1945, a little more than a week after an atomic bomb was dropped on Hiroshima. (U.S. National Archives)

President Harry Truman’s decision to drop atomic bombs on Hiroshima and Nagasaki came with regret over the loss of life, but without hesitation.

Truman’s diaries, speeches and personal correspondence present a man who believed the bombs would end the war before Soviet intervention.

They also show how an early belief that the bombs would somehow only target combatants gives way to a later justification that the deaths of innocent Japanese lives was necessary to prevent more American fatalities.

Truman only learned of the atomic bomb’s existence after assuming the presidency. Truman inquired about the mysterious Manhattan Project years earlier, while heading a Senate committee to investigate war spending, but Secretary of War Henry Stimson refused to let him review it.

“He said that he now understood perfectly why it was inadvisable for me to have taken any other course than I had taken,” Stimson wrote in his diary on April 25, 1945, two days after Truman was fully briefed on the atomic bomb’s progress.

The following excerpts come from documents collected by the Harry S. Truman Library and Museum: