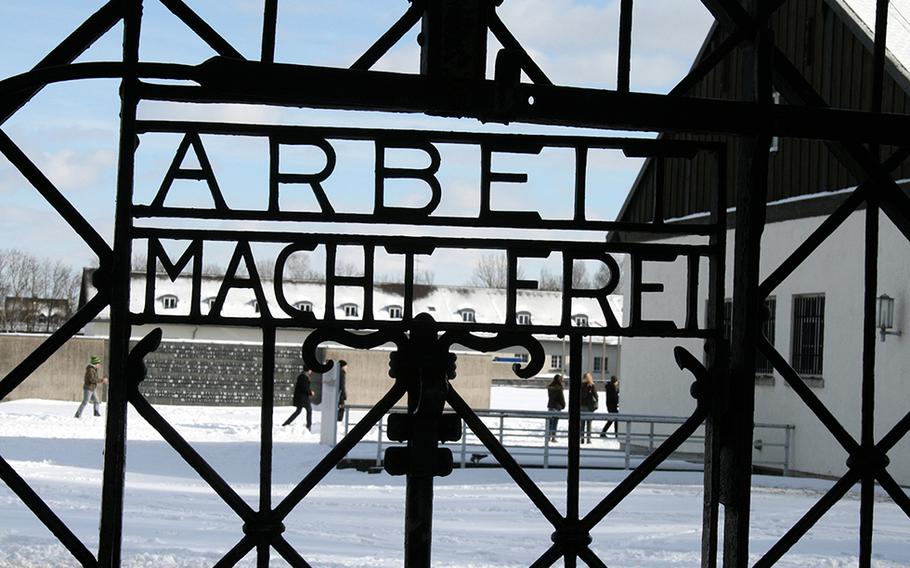 The front gate to Dachau includes the infamous slogan that translates to "Work makes you free." From time to time, the signs at these concentration camps are stolen. One taken from the Dachau camp in November 2014 has yet to be recovered. (Suellen Dickson/Special to Stars and Stripes)

As the Allies swept deep into German-occupied territory, they discovered the most terrible secret of the Third Reich– the vast network of slave labor and extermination camps at the heart of what came to be known as the Holocaust.

Millions died in those camps, including nearly 6 million Jews. Other victims included Sinti and Roma, or gypsies, gays, Christian clergy, Marxists, Allied POWs and others who stood up to Adolf Hitler. The depth of the horror served to convince millions around the world that the blood and treasure spent to destroy the Nazi regime had been worthwhile.

Since rising to power in 1933, the Nazis established a vast network of 22 main concentration camps and thousands of smaller facilities where prisoners worked as slaves for German industry. In addition the Nazis set up six “extermination camps” for industrial-scale mass murder, particularly of European Jews.

The retreating Germans tried to hide evidence of their crimes. They tried to dismantle camps, destroy the gas chambers and crematoriums and marched out thousands of prisoners. But the system was so vast and the Allied advance so rapid that Nazi efforts could not hide the terrible truth.

Soviet troops were the first to liberate the camps, reaching Majdanek near Lublin, Poland in July 1944. Six months later, they overran the biggest extermination camp, Auschwitz in southwestern Poland.

American troops liberated the Buchenwald camp near Weimar, Germany, on April 11, 1945, rescuing more than 20,000 emaciated, diseased survivors but too late to save an estimated 56,000 prisoners who had died there. Other camps such as Dachau, Mauthausen and Bergen-Belsen soon fell to American or British forces.

The terrible scenes -- including piles of unburied corpses -- shocked battle-hardened Allied soldiers who were no strangers to suffering and death. Allied soldiers forced German civilians to tour the camps and posted gruesome photos in town squares to drive home the depth of Nazi crimes. In some camps, German civilians were forced to dig graves for camp victims murdered by guards as Allied forces closed in.

Many of the camps, including Buchenwald, Auschwitz and Dachau, have been preserved to honor the dead and remind future generations of the horrors of racism and war.