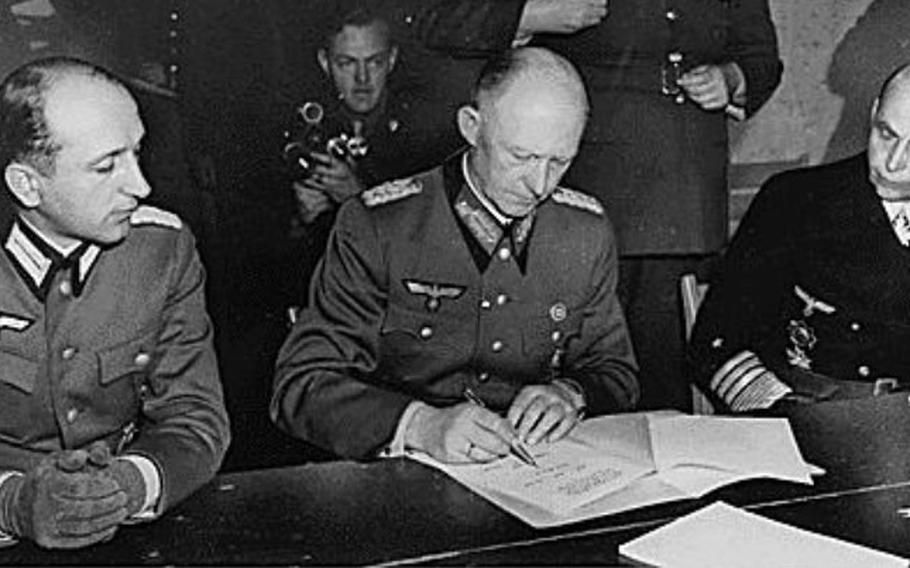 Alfred Jodl signs the unconditional surrender of Germany on May 7, 1945, in France. The following year, he was convicted of war crimes and executed. (U.S. National Archives)

The end of World War II in Europe 70 years ago this week was a joyous occasion for virtually all Americans — save for the journalist who broke the surrender story, a scoop that turned him into a pariah and dashed his career.

Edward Kennedy, the Paris bureau chief for the Associated Press, broke a 36-hour restriction against publishing the news set by the Supreme Headquarters Allied Expeditionary Force, bringing the wrath of the brass and his fellow reporters down on him.

“Within hours, a petition had been drafted and signed by 54 of the war correspondents attached to SHAEF in Paris,” wrote Michael Scully, an assistant professor of journalism at Roger Williams University in Rhode Island, in an analysis of the episode published last year in the Irish Communications Review.

“In it, they angrily denounced Kennedy’s decision to break the embargo and called Kennedy’s ethics into question.”

As Scully points out, the dividing line between the military and war correspondents during WWII was by no means clear, and the reporters were largely viewed as “unofficial” extensions of the military staff.

So when Gen. Frank Allen, Jr., SHAEF’s head of public relations, gathered a bevy of reporters to witness the German surrender ceremony on May 7, 1945, in Reims, France, he expected they would all abide by the 36-hour embargo put in place barring publication.

The press corps hotly objected to the block, arguing that the news would leak out in that amount of time, but Allen remained adamant.

Nevertheless, Kennedy, along with two of his top rivals working for the International News Agency and United Press, raced back to Paris to write their stories and then jockeyed for position at the sole Signal Corps telegraph office.

The embargo, however, ate away at Kennedy, who had been burned before by such obstructions. Two years earlier, he’d been poised to publish a story about Gen. George Patton slapping two soldiers in Sicily during a hospital inspection. Allied Commander Dwight Eisenhower had personally asked Kennedy not to publish the story; Kennedy was scooped by a fellow reporter after complying.

When Kennedy became aware that news of the German surrender already was being broadcast on German radio, he would wait no longer. He patched a phone call through a French-run military air base on the edge of Paris and dictated about 300 words of his surrender story to the AP in London. His story, with byline, ran in most U.S. newspapers on the morning of May 8.

The AP first touted the story as “the scoop of the century,” but the message quickly changed.

“It’s not clear what deals, if any, were made between the AP management and the U.S. government, but the AP press access was quickly restored and an apology was given by AP President Robert McLean,” Scully wrote.

Kennedy spent several years pressing the U.S. government to explain its decisions regarding the surrender announcement. The government admitted that Eisenhower had authorized German authorities to broadcast news of the surrender over the radio before the embargo had ended.

For Kennedy, that was vindication he had not violated the embargo because the news had already been made public, Scully wrote.

“In the years afterward, Kennedy never came to terms with his standing in the news industry,” Scully wrote.

The president of the Associated Press issued a formal apology in 2012 for how the news organization had treated Kennedy.

For Kennedy, it came far too late.

In the years after war’s end, he drank alcohol heavily, lost his driver’s license and was divorced. He moved to California and worked for several newspapers, and while walking home one evening in 1963, the 58-year-old newsman whose byline once graced the scoop of the century was hit and killed by a car.