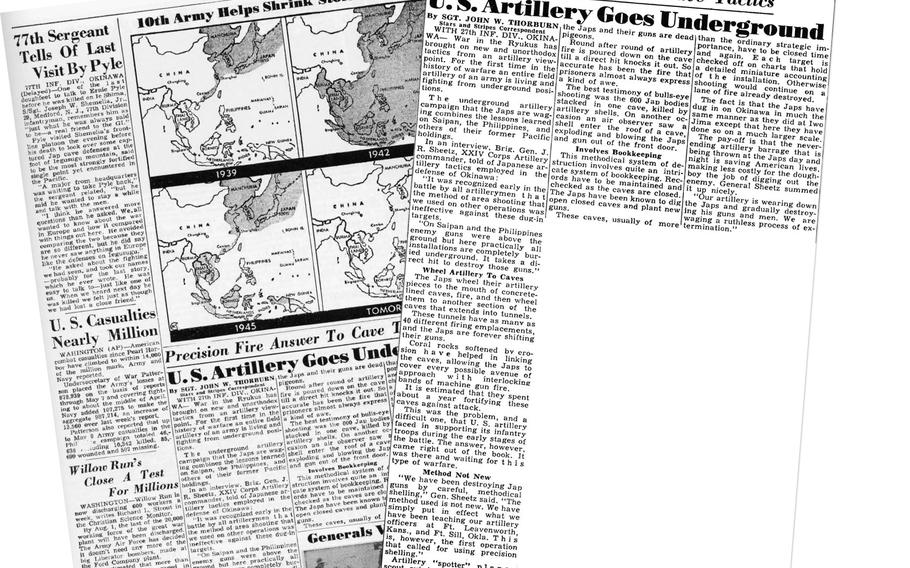 WITH 27th INF. Div., Okinawa — War in the Ryukus has brought on new and unorthodox tactics from an artillery viewpoint. For the first time in the history of warfare an entire field artillery of an army is living and fighting from underground positions.

The underground artillery campaign that the Japs are waging combines the lessons learned on Saipan, the Philippines, and others of their former Pacific holdings.

“It was recognized early in the battle by all artillerymen that the method of area shooting that we used on other operations was ineffective against these dug-in targets.

“ On Saipan and the Philippines enemy guns were above the ground but here practically all installations are completely buried underground. It takes a direct hit to destroy those guns.”

Wheel Artillery To CavesThe Japs wheel their artillery pieces to the mouth of concrete-lined caves, fire, and then wheel them to another section of the caves that extends into tunnels.

These tunnels have as many as 40 different firing emplacements, and the Japs are forever shifting their guns.

Coral rocks softened by erosion have helped in linking the caves, allowing the Japs to cover every possible avenue of approach with interlocking bands of machine gun fire.

It is estimated that they spent about a year fortifying these caves against attack.

This was the problem, and a difficult one, that U.S. artillery faced in supporting its infantry troops during the early stages of the battle. The answer, however, came right out of the book. It was there and waiting for this type of warfare.

Method Not New“We have been destroying Jap guns by careful, methodical shelling." Gen. Sheets said. “The method used is not new. We have simply put in effect what we have been teaching our artillery officers at Ft. Leavenworth, Kans., and Ft. Sill, Okla. This is, however, the first operation that called for using precision shelling."

Artillery "spotter" planes scout out targets, mark them. Once an installation is spotted, the Japs and their guns are dead pigeons.

Round after round of artillery fire is poured down on the cave till a direct hit knocks it out. So accurate has been the fire that prisoners almost always express a kind of awe.

The best testimony of bulls-eye shooting was the 600 Jap bodies stacked in one cave, killed by artillery shells. On another occasion an air observer saw a shell enter the roof of a cave, exploding and blowing the Japs and gun out of the front door.

Involves BookkeepingThis methodical system of destruction involves quite an intricate system of bookkeeping. Records have to be maintained and checked as the caves are closed. The Japs have been known to dig open closed caves and plant new guns.

These caves, usually of more than the ordinary strategic importance, have to be closed time and again. Each target is checked off on charts that hold a detailed miniature accounting of the installation. Otherwise shooting would continue on a lane of fire already destroyed.

The fact is that the Japs have dug in on Okinawa in much the same manner as they did at Iwo Jima except that here they have done so on a much larger scale.

The pay-off is that the never ending artillery barrage that is being thrown at the Japs day and night is saving American lives, making less costly for the doughboy the job of digging out the enemy. General Sheets summed it up nicely.

“Our artillery is wearing down the Japs and gradually destroying his guns and men. We are waging a ruthless process of extermination.”