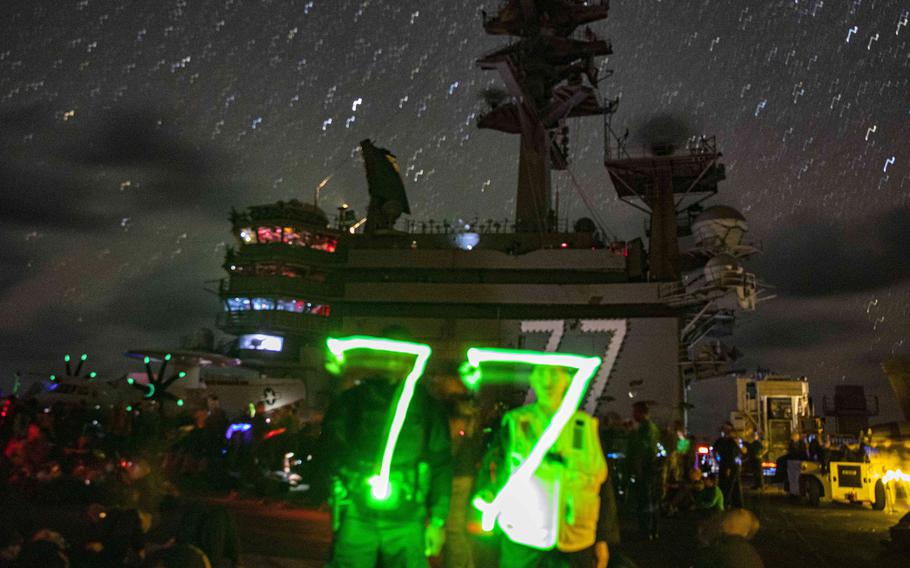 Sailors aboard the aircraft carrier USS George H.W. Bush paint the ship's hull number with their flashlights during a stargazing event on the flight deck, Aug. 19, 2022. The George H.W. Bush Carrier Strike Group passed the Strait of Gibraltar and entered the Mediterranean Sea as part of a deployment in the U.S. Naval Forces Europe-Africa area of operations, Aug. 25. (Novalee Manzella/U.S. Navy)

NAPLES, Italy — A Navy carrier strike group with more than 6,000 sailors entered the Mediterranean Sea on Thursday, in a continuing demonstration of U.S. and NATO resolve as Russia’s war on Ukraine stretches into its sixth month.

The George H.W. Bush Carrier Strike Group transited the Strait of Gibraltar on a scheduled deployment to the area of operations of U.S. Naval Forces Europe-Africa and U.S. 6th Fleet, the service said in a statement.

The transit marked the first time the aircraft carrier USS George H.W. Bush has been in the region since 2017, according to the statement.

It is expected to relieve the Harry S. Truman Carrier Strike Group, which has been on duty in the Mediterranean for more than eight months, USNI News reported Aug. 8. But the Navy has not yet said whether that is the case.

In December, Defense Secretary Lloyd Austin ordered Truman to remain in the Mediterranean as a show of U.S. and NATO strength amid Russia’s military buildup along the borders of Ukraine. 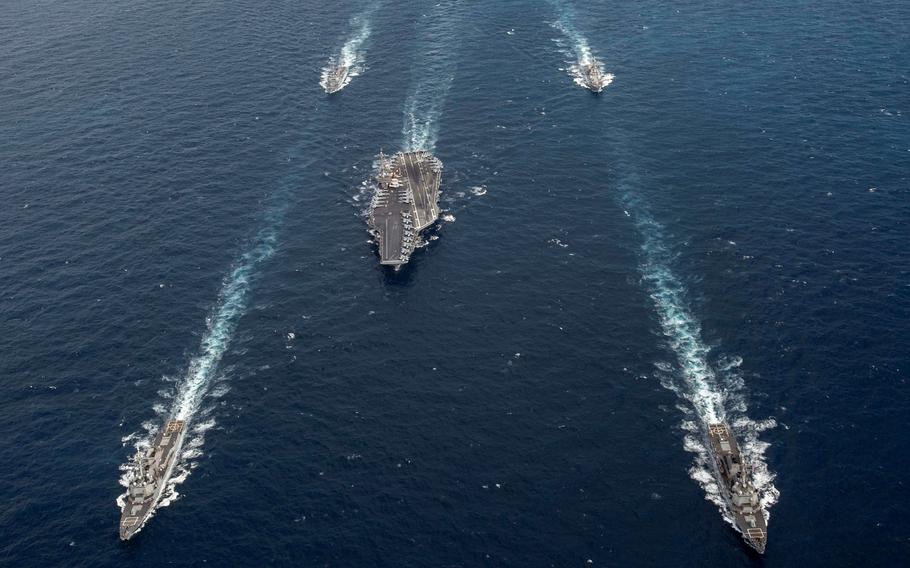 Ships from the George H.W. Bush Carrier Strike Group transit the Atlantic Ocean in March 2022. The ships passed the Strait of Gibraltar and entered the Mediterranean Sea as part of a deployment in the U.S. Naval Forces Europe-Africa area of operations, Aug. 25, 2022. (Samuel Wagner/U.S. Navy)

The carrier had been scheduled to deploy to U.S. 5th Fleet in the Middle East. Russia launched its full-scale attack on Ukraine on Feb. 24.

In late March, the Pentagon announced that Truman would remain in the Mediterranean for the foreseeable future.

Since arriving in the 6th Fleet area of operations, Truman has supported patrol and training flights in Eastern Europe and sailed the Adriatic, Ionian and Aegean seas.

In July, an F/A-18E Super Hornet was blown off its deck into the Ionian Sea. The plane was recovered earlier this month.

USS George H.W. Bush finished a 2½-year drydock maintenance cycle in 2021 and recently completed its final certification exercise with the Italian navy destroyer Caio Duilio, according to the statement.