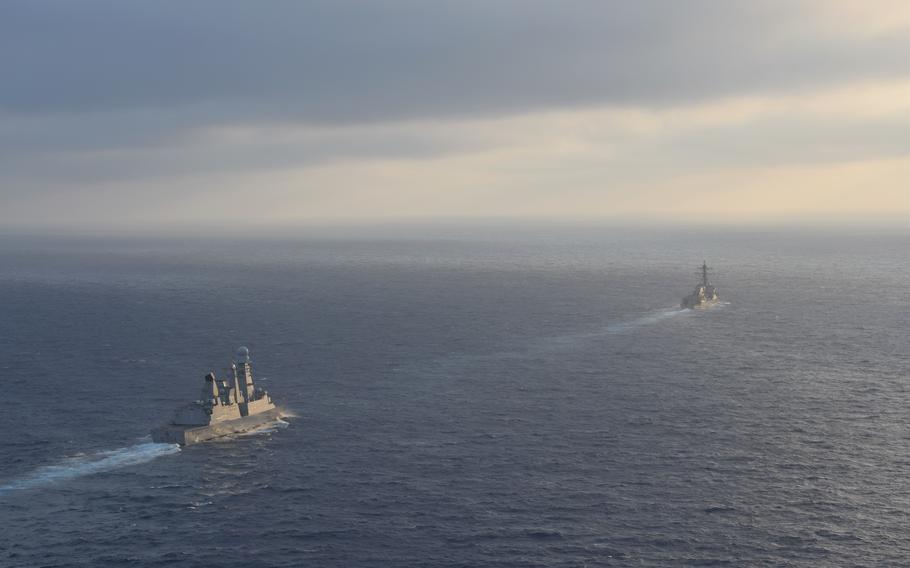 Italian Navy destroyer ITS Caio Duilio (D 554) sails with the guided-missile destroyer USS Bulkeley (DDG 84) during a passing exercise (PASSEX) in the Atlantic Ocean, May 21. Caio Duilio will exercise with the ships and aircraft of Carrier Strike Group (CSG) 10 during its upcoming Composite Training Unit Exercise (COMPTUEX). (Massimiliano Galieni/Italian navy)

(Tribune News Service) — For the second time in a row, a NATO ally’s warship is joining a Norfolk-based carrier strike group’s final preparations for deployment.

In a COMPTUEX, a Navy group runs through complex scenarios to certify its ability to carry out a wide range of missions.

Last year, when the Norwegian frigate HNoMS Fridtjof Nansen joined the USS Harry S. Truman strike group for its COMPTUEX, those scenarios included a transfer of command and control from a U.S. fleet to NATO, as well as operations under NATO command and control.

Both were critical when the Truman group, including Nansen, deployed this year. They came under NATO command and control — a first for a carrier group — for the Neptune Strike 2022 exercise in January, a test of how a carrier group integrated with other NATO forces would defend any alliance member.

And after doing just that through the late winter and spring, with Truman’s air wing running air policing missions over NATO member airspace as the carrier and its ships patrolled the Aegean, the group returned to NATO command and control earlier this month for the Neptune Shield 2022.

For this exercise, it joined the Norfolk-based USS Kearsarge Amphibious Ready Group, its embarked Marines from the 22 Marine Expeditionary Unit and forces from Albania, Bulgaria, Croatia, Denmark, France, Germany, Greece, Italy, Latvia, Lithuania, Netherlands, Poland, Portugal, Romania, Slovenia, Spain, Turkey and the United Kingdom. The aim is to work on and refine operations linking carrier groups with expeditionary forces — like the Marines and the sailors who move them on and off the beach.

The Kearsarge group’s COMPTUEX earlier this year included the first NATO command and control scenario for an amphibious group and its Marines. 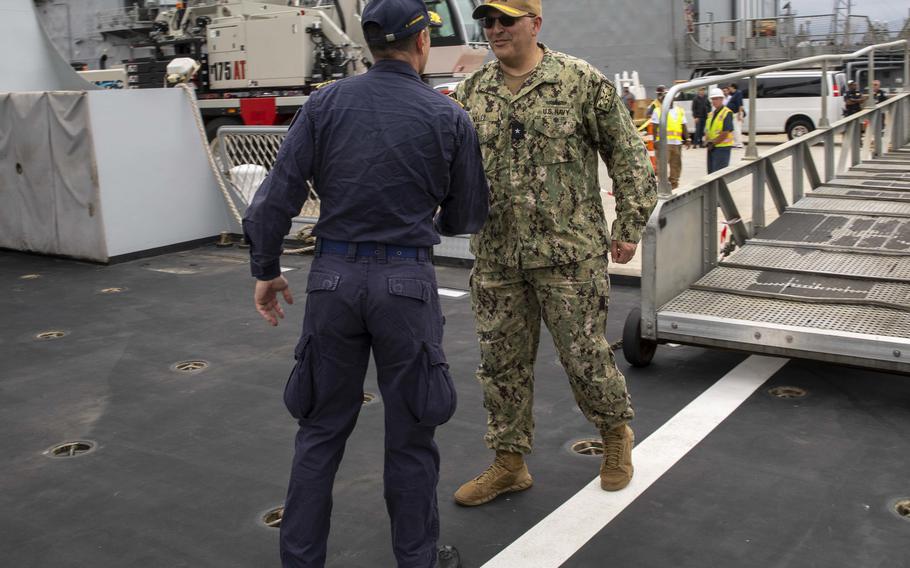 The Caio Duilio is named for the Roman consul Gaius Duilius, who won Rome’s first victory at sea during the First Punic War, defeating the Carthaginians at the Battle of Mylae in 260 B.C.

Its crew of 193 carry out a wide range of missions, from escorting carrier strike groups, to anti-aircraft and anti-submarine warfare. Stealth technology gives it a low radar profile and it has a top speed of 29 knots.