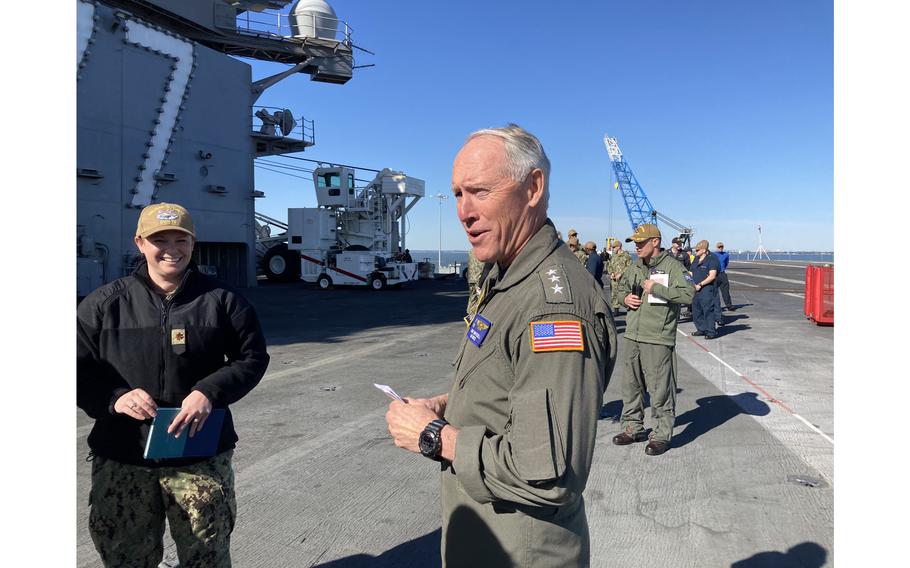 Some elements of that, in the form of the Ford and the new E2-D Hawkeye early warning planes, have arrived in Norfolk. But still more, Whitesell said, is coming soon.

One is the new CMV-22B — a version of the tilt-rotor Osprey. It’s slated to replace the Navy’s C-2A CODs — carrier onboard delivery planes — that bring people and equipment to carriers at sea.

CODs play a particularly important role when people or parts are needed urgently, and the new CMV-22Bs can reach reach farther and so extend the reach of supply lines, Whitesell said. CMV-22Bs should begin arriving in Hampton Roads in about a year.

The F-35 joint strike fighter will begin joining Norfolk-based carrier strike groups in the months ahead, Whitesell said. They made their first operational deployment last year on the San Diego-based USS Carl Vinson.

In December, the Bush itself tested another critical element of the next generation Naval Air Force, the MQ-25, a drone that can carry fuel to resupply Navy fighters and E2s while in flight.

With aerial refueling, carrier planes can fly farther and stay in the air longer — as with the CMV-22Bs, the result is that carrier strike groups can reach farther and operate even more flexibly than they do now, Whitesell said.

Walking the flight deck of the Bush, meanwhile, drives home another point — because its island, like the rest of the Nimitz class carriers, is farther away from the stern than is the Ford’s, its planes mostly have to park behind the island. They can only move from those parking places when flight operations pause, Whitsell said.

Space is tight between the island of a Nimitz carrer and its bow, including areas where plane crews load bombs, missiles and armaments.

The lone F/18 on Bush’s flight deck as it was moored at Naval Station Norfolk during Whitesell’s visit was secured between the island and the carrier’s bow — but the plane’s nose was hanging over the end of one of the catapults used to launch aircraft, which at sea would have put that catapult out of action.

The Ford’s much larger space in front of the island — its captains call that area their NASCAR pit stop — doesn’t infringe on the catapult area. The Ford’s catapults, like the weapons elevators that carry arms to the flight deck, run with electric motors and magnets instead of the steam and hydraulic systems used on Nimitz class carriers, which cuts down on breakdowns and repairs, Whitesell said.

The new layout and the electro-magnetic systems mean Ford class carriers can launch more planes faster, another major transformation in the Navy’s 100 year history of carriers.

The first carrier, USS Langley, was commissioned 100 years ago — basically as a experiment, launching planes while operating on the York River, to see if the idea was even possible, Whitesell said.

A century of innovations has made what was an unproved concept into a worldwide force — one that means carriers based in Hampton Roads can reach anywhere in the world, Whitesell said.

That means that even as new strategic worries arise in new parts of the world, the balance of carriers between the west and east coasts is likely to stay the same, he added.