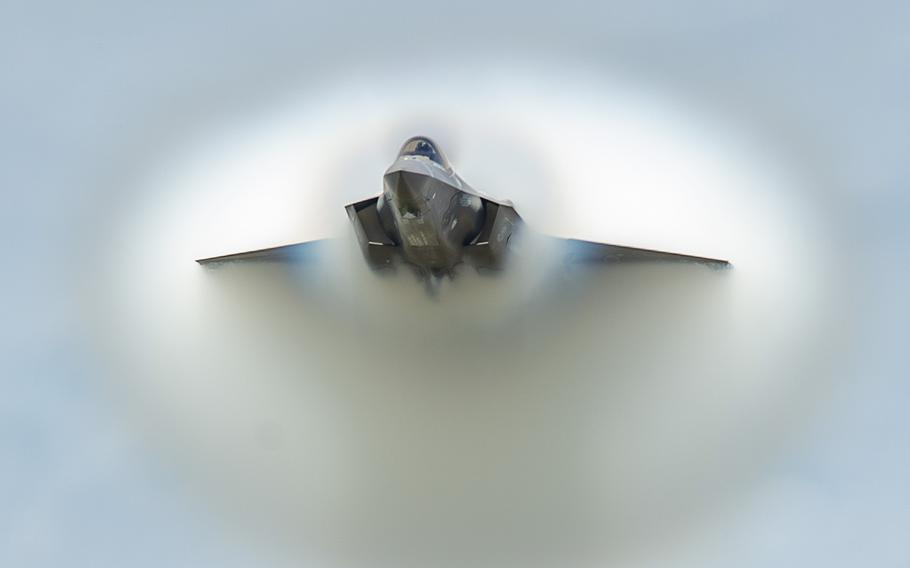 FORT WORTH (Tribune News Service) — As F-35 joint strike fighters move from station to station along Lockheed Martin’s Fort Worth production line, screens display information that includes the jet’s overall sequence number, the military base where it’s headed and the country that ordered it.

Those screens have a United Nations feel these days, showing the flags of the United Kingdom, Norway, Israel and others placing orders for the stealthy, 5th-generation warplanes.

“There’s huge interest from around the world,” J.R. McDonald, the vice president of F-35 business development at Lockheed Martin, said in an interview. “And obviously the situation in Ukraine makes everybody re-think their protection and their security of their own country.”

Facing upgrade challenges, cost overruns and budget constraints, the Pentagon has moved to at least temporarily reduce the number of F-35s in its annual budget, even as top brass stress they are committed to the plane as the foundation of the U.S. fighter fleet of the future.

In contrast to the U.S. military’s brake pumping, international demand has been building for the cutting-edge fighters.

Such foreign sales are unlikely to cause a massive boom in hiring at the plant.

Past up-and-down cycles tied to the ebb and flow of weapons orders weren’t great for retention and workforce morale, so today the company has a strategy of maintaining a stable workforce at the Fort Worth location, around its current level of approximately 18,000.

Still, international business helps support jobs at the facility, which is both a top employer and significant economic driver in the metroplex.

Challenges to the program

The F-35 represents the country’s most expensive weapons system with a Government Accountability Office review earlier this year estimating overall cost at more than $1.7 trillion - a sum that includes production, operation and sustainment costs.

According to the GAO, those responsible for actually flying and maintaining the F-35 praise it as an impressive and capable machine when it’s in the air, but the watchdog agency and others have said not enough progress has been made on reducing costs and increasing reliability of the aircraft.

An important modernization effort known as “Block 4″ faces rising costs and schedule delays, according to the GAO, which contributed to the Defense Department decision to cut its order number for this budget cycle.

The Air Force recently grounded its F-35s over what turned out to be a small number of suspect ejector seats. Following inspections, however, the planes were cleared last week to fly again and they aren’t the only military aircraft to encounter ejection seat issues in recent years.

While some members on Capitol Hill have sharpened their knives to go after the F-35 program, Texas lawmakers from both parties have come to its defense, including Rep. Kay Granger, R- Fort Worth, who is poised to assume the powerful position of House Appropriations chair if Republicans re-take the majority in the fall midterms.

Rep. Marc Veasey, D- Fort Worth, also has gone to bat for the planes and said in an interview the F-35 will be an important military asset for the future even as debates over it continue.

“The future for the F-35 and for jobs at the plant are going to be secure for a long time, but the delegation is going to have to work together and be able to make sure that that money continues to flow,” Veasey said.

But Veasey also highlighted the importance of overseas sales and particularly cited Germany’s about-face on the plane. It ordered 35 F-35s earlier this year after indicating for years it preferred alternative options.

The U.S. military is still the core of the F-35 program and expected to purchase around 2,500 planes total. Of the 837 planes delivered to date, two-thirds of them have been to the U.S.

McDonald described the Pentagon’s move to slow the pace of its purchases as unrelated to performance issues.

“It’s certainly not a question of capability or the need for their airplanes. I think they’re making budget decisions among large programs,” he said. “The warfighters indicate that they want as many F-35s as fast as they can get them.”

He said the Air Force has stated it needs to buy 72 fighters a year just to maintain the average age of the fleet.

Despite the watchdog criticisms and Capitol Hill wrangling over the F-35 program, other countries are lining up to purchase the planes.

There are eight partner countries that helped fund the F-35 program from the start: the United States, United Kingdom, Italy, Netherlands, Australia, Norway, Denmark and Canada.

The last of those partner countries to commit to the F-35 has been Canada, which is finalizing the decision now.

Non-partner countries also are getting on board in the wake of Russia’s invasion. Germany is perhaps the most notable but the Czech Republic also recently announced its intention to go with the F-35 and Greece is moving that direction as well.

The sales pitch to other countries starts with the plane’s status as the only real 5th-generation multirole fighter available to the United States and its allies. Its stealth qualities give it unique capability to penetrate and knock out air defenses.

It also has advanced sensors that provide superior situational awareness and allow it to function as a critical information center pushing data out to any allied forces in the fight.

But such acrobatic airborne duels are viewed as history, with modern fighter battles more closely resembling cyber warfare in the sky. With its cutting-edge sensors and communications technology, the F-35 is designed to accomplish key tasks: detect enemy activity, relay information and blow things up.

Another key selling point is interoperability.

People buy iPhones because everybody they know has one. It makes texting between devices easier and comes in handy when it’s time to borrow a charger.

Switzerland is expected to buy F-35s. Even though it’s not a member of NATO, it will have planes that interact well with NATO forces should the need arise.

Other countries also can request specific changes that fit their needs. A prime example is Norway, which asked for a drag chute to be built into its planes to better stop the jets when they land on icy runways.

Numerous watchdog reports have painted the F-35 as an aircraft that might be highly capable when it’s in the skies but is also finicky, out of commission too often with maintenance issues and burdened by high operating costs.

McDonald touted progress on those costs and said the evidence can be seen in competitions the plane has won, including those conducted by Finland and Switzerland.

“The F-35 had sort of a bad rap for being expensive to maintain,” McDonald said. “They assumed that it was expensive because it was 5th gen and stealth and everything else.”

One reason the U.S. military has slowed its purchasing pace is that it is awaiting those Block 4 upgrades and having to retrofit planes is expected to raise costs.

McDonald said the pending tech upgrades should reassure buyers the planes will be relevant well into the future.

Even as discussion continues about sending western warplanes to Ukraine, there’s essentially no chance F-35s will be headed there. Supplying them to Ukraine would be viewed by Russia as akin to an outright declaration of war and there would be too much danger of a downed F-35 falling into Russian hands, giving them insights into its technology.

But Ukraine has been a turning point for how many countries view the F-35.

Russia’s fighters have struggled to dominate the skies there, which highlights the benefits of the F-35′s advanced capabilities.

The threat of the conflict spilling across borders also has motivated countries, particularly those in Europe, to boost their military spending and ensure they have the latest-and-greatest tech in the sky.

“It made everybody sit up and say that security does matter and investing in defense does matter and the ability to guarantee our own sovereignty is important,” McDonald said.