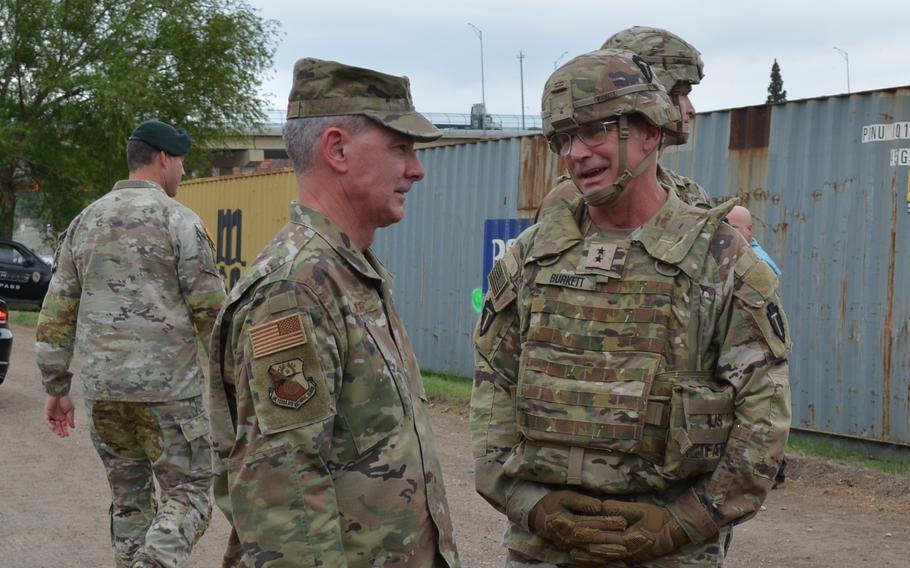 Maj. Gen. Thomas Suelzer, the Texas adjutant general, speaks with Maj. Gen. Ronald “Win” Burkett, commander of the 36th Infantry Division, on May 23, 2022, during a visit to Texas National Guard members deployed in Eagle Pass on a state-sponsored mission to the border with Mexico. (Rose L. Thayer/Stars and Stripes)

AUSTIN, Texas — More than half of the Texas National Guard members deployed along the state’s border with Mexico have said they would be willing to volunteer for another year of the same duty, the mission’s commander told state lawmakers Wednesday.

The change in morale and opinion about the state’s border mission among troops represents a vast change from earlier this year when some Guard members joined a state employees union to fight the pay problems and poor living conditions that they faced as the force doubled its size from about 5,000 to 10,000 troops.

“In the last four months that I've been on the border, that mission has continued to mature,” said Maj. Gen. Ronald “Win” Burkett, who took command in March of the Texas 36th Infantry Division, which leads the border mission. “My understanding is at the soldier level, that the value that they bring and how important what they're doing is meeting the governor's intent, absolutely helps morale. At the same time, working with the state, there's been a lot of just soldier care.”

In a recent survey of the 5,400 troops deployed along the border, 2,800 responded they would volunteer to stay on for another year, he said. For most troops, the one-year mark for their deployment order should occur this fall.

“I think that speaks to the leadership,” Burkett said.

He spoke alongside Maj. Gen. Thomas Suelzer, the Texas adjutant general, and provided the update during a hearing of the Texas House Defense and Veterans’ Affairs Committee. While the hearing was intended to the review the state’s programs and funding for mental health services, it first called the two generals forward for an update on the state-sponsored border mission known as Operation Lone Star.

“Our Texas National Guardsmen supporting Operation Lone Star have stepped up to the challenge of a difficult and complex mission,” Suelzer said.

Gov. Greg Abbott began Operation Lone Star in March 2021 with about 500 Guard members working alongside state police to deter the illegal crossing of people and drugs along the Rio Grande. Later that year, he drastically escalated the number of troops deployed following a large caravan of migrants seeking asylum that arrived in September to the Texas border town of Del Rio.

In the following months, the number of troops peaked at about 10,000 Guard members with many living in six hastily built, crowded base camps. Since then, the Guard has fixed its payroll system to near perfect accuracy and moved soldiers out of 36-person sleeping trucks into dorm-style rooms, Suelzer said.

“I want to say thank you to the military department for increasing morale at the border,” said Rep. Tony Tinderholt, a Republican from Arlington and an Air Force and Army veteran. “Today we're going to talk about [post-traumatic stress disorder] and mental health, and part of making sure that soldiers and airmen are taken care of is the base camps that they live at.”

Suelzer said he has increased operational efficiencies that allowed for the Guard to close one base camp and send about 700 support personnel home.

The cost of the mission for this fiscal year is expected be about $1.33 billion, he said. In Texas, the fiscal year runs from Sept. 1 through Aug. 31. The Texas Military Department still needs the state to provide about $38 million to finish out the year, Suelzer said.

To continue into 2023 at the same level of operations would cost about $1.36 billion, he said. Though state lawmakers have already allocated funding for 2023 — it budgets two years at a time — Suelzer said the high costs of payroll and managing base camps will “quickly roll through that budget.”

Abbott has shown no signs of decreasing his border operations, and recently provided new authority to Guard members. Following the July Fourth holiday weekend, when about 5,000 migrants were arrested for illegally crossing into the U.S. from Mexico, Abbott announced Guard members and state police would begin transporting those people back to a port-of-entry.

Service members play a limited role in that, Burkett said. Troops secure the area and group migrants together as they wait for U.S. Customs and Border Protection agents or state police to arrive.