US has viewed wreckage of kamikaze drones Russia used in Ukraine 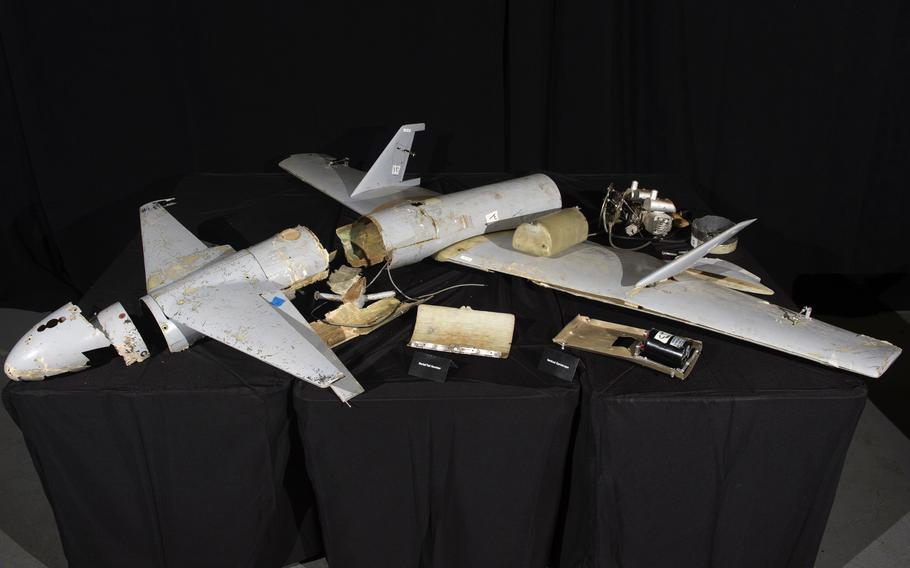 The U.S. government has examined the wreckage of Iranian-made drones shot down in Ukraine, deepening its insight into the unmanned craft that Russia has launched in a spate of kamikaze attacks on the country’s critical infrastructure, according to two U.S. officials.

Information about the drones’ structure and technology could prove crucial in helping the United States and its Ukrainian allies better identify and ultimately defeat them before they can reach their targets. Officials said the process has been used in the past to study weaponry deployed by Iran’s proxies in conflicts in the Middle East. People interviewed for this report spoke on the condition of anonymity to discuss sensitive intelligence collection.

The Shahed-136 unmanned aerial vehicles (UAVs) used in this week’s attacks on the Ukrainian capital, Kyiv, have targeted power stations and other utilities, killing at least four, authorities there have said. Their use by Russian forces has underscored the growing ties between Moscow and Tehran, alarming Western leaders whose sanctions and other punitive economic measures have drastically undercut the Kremlin’s ability to regenerate its military after eight months of war.

The Iranian-made drones are being launched from three Russian military bases in Crimea and another position in Belarus, a Ukrainian official said. Tehran has dispatched advisers to Russian-controlled areas, where they have provided operators with technical instruction.

It is unclear how the United States gained access to the drone wreckage, though the Pentagon coordinates closely with Ukraine’s military and maintains a small administrative presence at the U.S. Embassy in Kyiv. That team is led by a one-star Army general.

The Shahed is a large, lumbering aircraft that flies very low and appears to have few metallic parts, making it difficult to detect with radars and other sensors before reaching its target. Examination of the wreckage may help overcome those challenges.

The drones’ points of origin pose another challenge, the Ukrainian official said: They are too far for U.S.-supplied rocket artillery to strike, blunting options for destroying the aircraft before they are airborne.

Ukraine, which says it has destroyed more than 220 Shahed-136 drones since Sept. 13, appears to be studying the platform, Estonian Defense Minister Hanno Pevkur told reporters this week. Pevkur said it was of regional urgency to learn about the aircraft.

Iran produces a variety of drones and has reportedly supplied them to Hezbollah in Lebanon and Houthi rebels in Yemen, among other groups. The Pentagon believes Iran-allied forces have used them against U.S. military personnel in Syria, including in an August attack at the U.S.-run base at Tanf.

The Houthis claimed to have used Samad-3 drones to attack a refinery in Riyadh, Saudi Arabia, last spring, and launched Samad-1 drones at Saudi Aramco facilities in other parts of the country. Those drones are distinct from the weapons used by Russia in Ukraine.

In February, the United Arab Emirates was hit by several drone and missile attacks claimed by the Houthis. In a military parade last month in Sanaa, the Yemeni capital, the Houthis reportedly displayed a local version of the Shahed-136. 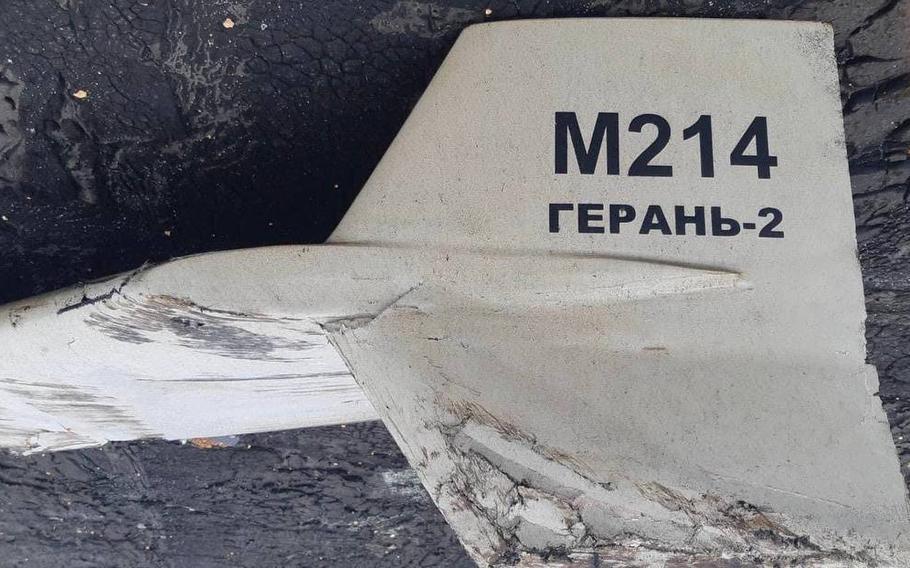 Ukraine has asked the United Nations to examine the wreckage, to determine the aircraft’s country of origin. In a letter dated Friday, Ukraine’s U.N. ambassador invited “U.N. experts to visit Ukraine at the earliest possible opportunity to inspect recovered Iran-origin drones.” The letter maintained that Iranian transfers of the drones would violate both U.N. sanctions against Iran and terms of the 2015 U.N. Security Council resolution on the Iran nuclear deal that year.

The Council held a closed-door meeting Wednesday to hear “an expert briefing . . . on recent evidence that Russia illegally procured Iranian UAVs that it is using in its war on Ukraine,” Nate Evans, spokesperson for the American U.N. mission, said in a statement after the session. “These UAVs were transferred from Iran to Russia in open violation of provisions” of the resolution approving the nuclear deal Iran signed with world powers.

Earlier this week, France and Britain - signers of the deal along with Iran, the United States, Germany, Russia and China - echoed Ukrainian charges that sending the drones to Russia violated a provision prohibiting Iran from transferring unmanned aerial vehicles with a range of more than 300 kilometers (186.4 miles) unless it had specific permission from the council.

“As was outlined during today’s meeting,” the statement from Evans said, “there is ample evidence that Russia is using Iranian-made UAVS” in its attacks on Ukraine. “By procuring these weapons in violation of U.N. Security Council Resolutions, Russia continues to flout international law in its pursuit of a senseless and brutal war.”

The statement did not indicate any immediate action would be taken, although Evans said “we anticipate this will be the first of many conversations at the U.N. on how to hold Iran and Russia accountable for failing to comply with U.N. Security Council-imposed obligations.”

The Shahed loiters in the air until it identifies a target, often a fixed position, and then dives into it, detonating onboard explosives. Unlike bigger reusable drones that fire missiles and return to a base, it flies low and slow.

Ukrainians call it “the lawn mower” because of the loud buzzing sound it makes. The distinct noise has served as a warning of its approach, allowing people to scramble for cover and brace for the explosion, which is smaller than the impact caused by conventional ballistic missiles.

The drones pose a significant problem, analysts say. Many defensive systems capable of defeating them are costly, are designed mostly for bigger threats like jets and helicopters, and take months or years to produce, limiting how many can be distributed and forcing military planners to prioritize sites deemed most vulnerable.

While Ukrainian air defenses have shown some success against the drones, even a few slipping through can cause havoc, said Samuel Bendett, an expert on the Russian military at CNA, a research group. “It’s a demonstration of Russian capability, and now they have cheap plentiful weapons that can constantly remind Ukrainians that their skies are not 100 percent safe,” he said. “It’s a very powerful psychological weapon.”

Russia’s performance with the Shaheds in Ukraine “suggests an evolution,” Bendett said. “They probably started with a basic concept the Houthis and the Iranians used themselves and built on it to possibly overwhelm Ukrainian air defenses, to fly around them, to circumnavigate them, in one way or another.”

Iranian military leaders will probably seek feedback from Russian commanders on how they have evaded Western air defenses, experts have said. Such information could aid Tehran in any potential attacks it pursues against its regional adversaries.

The United States has provided Ukraine with air defense systems capable of destroying drones. One, the Vampire, can take down drones with a launcher attached to a pickup truck.

The Pentagon also has promised to send Ukraine NASAMS, a surface-to-air missile system capable of intercepting ballistic missiles and other aerial threats. Two NASAMS are slated for delivery in the coming weeks, U.S. officials have said. Six others pledged to Ukraine are expected to take years to build and deliver.

There is no one-size-fits-all answer to air defense threats and to these drones specifically, experts say. They point to a diverse set of weapons capable of defending priority targets, from Stinger missiles, which are shoulder-fired weapons developed long ago, to newer, more sophisticated systems like the NASAMS, said Tom Karako, the director of the Missile Defense Project at the Center for Strategic and International Studies, a think tank.

Also needed, Karako said, are electronic warfare systems that can disrupt the connection between drone and operator, taking it offline. “You may not need the world’s biggest interceptors,” he said, “but you are going to need something.”

The Pentagon has not indicated whether this week’s attacks in Kyiv would trigger a rush to deliver more anti-drone weapons. A senior military official pointed to the 1,400 Stingers the United States has provided Ukraine to date and contributions from other Western countries to bolster Ukraine’s air defenses.

Both the Saudis and the United Arab Emirates have said Patriot interceptors have been used to thwart Houthi missile attacks - along with, in the UAE, a THAAD defense system. Neither has specified the defenses they have used against drones.

Ukraine uses kamikaze drones as well. The Pentagon has provided its military with hundreds of Switchblades, which are much smaller than the Shahed and are designed to strike small groups of soldiers or armored vehicles, depending on the variant. While smaller and more evasive than the Iranian drones, they lack the range, with the larger Switchblade version able to travel 25 miles. The domestically produced RAM II also is in use, but its range tops out at 18 miles, making both weapons more suitable near the front lines.

The Washington Post’s Ellen Nakashima contributed to this report.