Nuclear deterrence drill, talks on restocking arsenals next up on NATO’s agenda 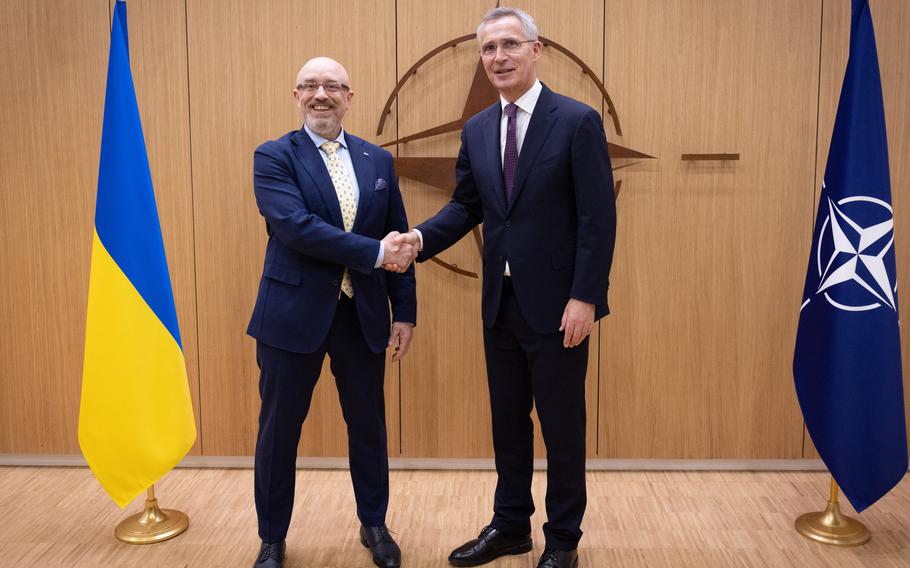 NATO Secretary-General Jens Stoltenberg, right, meets with Oleksii Reznikov, Ukraine's minister of defense, June 14, 2022 in Brussels. Stoltenberg said allies will continue to carry out a long-planned nuclear deterrence exercise in Europe in October, despite nuclear threats from the Kremlin. (NATO)

The U.S.-led NATO alliance will agree this week to a plan for ramping up munitions and weapons production to replenish stockpiles after months of arms shipments to Ukraine, NATO’s top official said Tuesday.

Secretary-General Jens Stoltenberg, speaking on the eve of a two-day defense ministers conference in Brussels, also said that next week, allies will carry out a long-planned nuclear deterrence exercise in Europe.

The exercise, which is held annually, comes as allies are on edge over Russian President Vladimir Putin’s nuclear saber-rattling in recent weeks.

“Now is the right time to be firm and to be clear that NATO is there to protect and defend all our allies,” Stoltenberg said when asked about the timing of the exercise, Steadfast Noon, and whether it should be delayed, given current nuclear tensions. 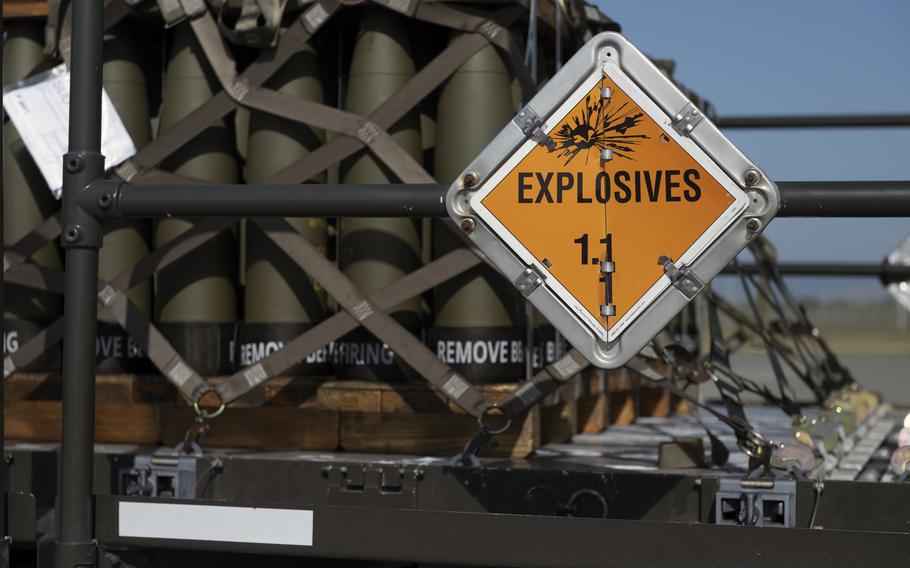 Pallets of munitions are loaded into a Boeing 747 at Travis Air Force Base, Calif., on April 26, 2022. The U.S.-led NATO alliance will agree this week to a plan for ramping up munitions and weapons production to replenish stockpiles after months of arms shipments to Ukraine, NATO’s top official said Tuesday. (Jonathon Carnell/U.S. Air Force)

Stoltenberg said canceling the drill would send the wrong signal to Putin at a time when “firm, predictable behavior” is what is called for to prevent further escalation.

Defense Secretary Lloyd Austin will lead the U.S. delegation to the talks, which are at NATO headquarters in Brussels.

On the sidelines, Austin also will hold a separate meeting of the Ukraine Defense Contact Group, a collection of allies and partners supplying Ukraine with weapons.

Stoltenberg said allies remain committed to getting Ukrainian forces the weapons they need to keep up the momentum against Russia, so speeding up production is imperative.

“The longer this war drags on, the more important it is that we also then are able to replenish these stocks,” Stoltenberg said.

Part of that means setting “more ambitious targets” for production so the defense industry can invest in new production capabilities for the long term, Stoltenberg said.

Russia’s barrage of missile strikes Monday across Ukraine targeting civilian infrastructure in cities is a sign of Putin’s increasing desperation after repeated military setbacks, he said.

“Russia is actually losing on the battlefield,” Stoltenberg said. “They are giving up territory because they don’t have the capabilities to stop the Ukrainian forces (from) making advances.”