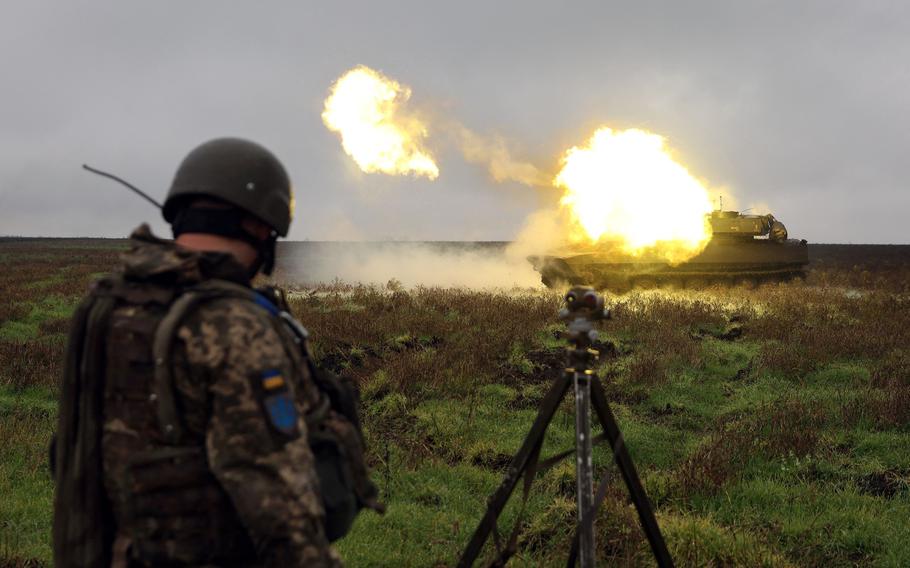 A Ukrainian soldier stands as a 2S1 Gvozdika self-propelled howitzer fires a shell on the front line in Donetsk region Oct. 10, 2022, as Russian forces earlier launched at least 75 missiles at Ukraine, with strikes targeting the capital Kyiv, and cities in the south and west. (ANATOLII STEPANOV, AFP via Getty Images/TNS)

(Tribune News Service) — With Russia’s war in Ukraine in its eighth month, some European nations that have funneled weapons to Kyiv are running low, and it could take years for defense contractors to meet the shortfall.

NATO states are urging companies to boost production to help them restock — to both resupply Ukraine and reinforce their own stores in a climate of heightened tension, according to people familiar with the matter. That’s as Russian President Vladimir Putin escalates his threats, including warning of a potential nuclear attack, with his troops facing numerous setbacks on the ground in Ukraine.

Kyiv’s allies have already sent in billions of dollars in arms, munitions and equipment since Russia invaded in February. That’s putting pressure on ammunition stockpiles, including 155 mm shells for artillery, some of the people said, of which the U.S. has given Ukraine well over a million rounds since the start of the war.

Defense companies in the U.S. and Europe are now seeing demand rise for air defense and anti-tank arms alongside other equipment, with governments increasingly recognizing that Ukraine will probably need military support for years to come. But it will be a struggle to quickly expand manufacturing after decades of limited orders.

As the war drags on, Ukraine’s partners may be tempted to prune back support as they worry about their own security needs, potentially creating the types of fissures Putin is seeking to exploit alongside tensions over access to energy in Europe. Apart from multiple launch rocket systems, Ukraine’s allies have mostly focused on sending it Soviet-era weapons and tanks, which are also running low in supply.

Those stocks need to be replaced with modern weapons. At the same time, North Atlantic Treaty Organization members need more arms to shore up the alliance’s presence on its eastern flank.

Defense ministers will meet in Brussels this week to discuss these issues, following a gathering of national armaments directors in late September. “Enhancing NATO stockpiles will ensure we can keep supporting Ukraine,” Secretary General Jens Stoltenberg said after that meeting.

It could take years before supply catches up with demand. Defense companies face hurdles to expand production to the scale that is necessary. European defense firms will also have to modify assembly lines after many governments cut defense spending following the Cold War and as the focus on equipment shifts back to what has worked for Ukraine.

Defense spending in Europe and Canada amounted to a total of around $310 billion in 1990, before dropping off for two decades, according to data from NATO, which bases the figures on 2015 prices and exchange rates. Only after 2014, when Russia annexed Crimea, did spending start to pick up again.

“We’ve been operating in that modus for decades and now all of a sudden we’re entering a totally different ball game,” said Burkard Schmitt, defense and security director at the AeroSpace and Defence Industries Association of Europe. “You have to scale up massively and this is simply an enormous effort and takes time because you have to reconfigure everything.”

Firms are also struggling to access certain semiconductors and rare-earth metals, while skilled workers are in short supply.

On an analyst call on April 26, Raytheon Technologies Corp. Chief Executive Officer Greg Hayes said the company wouldn’t see orders come in before 2023 at the earliest for larger replenishments of Stinger missiles and Javelin anti-tank munitions, noting difficulties sourcing materials needed to produce them. Both Stingers and Javelins have played a role in helping Ukraine beat back Russian troops.

“Unfortunately, DOD hasn’t bought a Stinger in about 18 years and some of the components are no longer commercially available,” Hayes said at the time, referring to the Pentagon. He said Raytheon would have to redesign some of the electronics in the missile, and “that’s going to take us a little bit of time.” The U.S. Army in May subsequently awarded the company a $624 million contract to produce 1,300 Stinger missiles, including support to address “obsolescence, modernize key components, and accelerate production.”

Dassault Aviation SA Chief Executive Officer Eric Trappier on July 20 echoed concerns about supply chains and a shortage of skilled workers, stressing it would take at least an additional year to increase the pace of production of its fighter aircraft, which already take approximately three years to manufacture.

Officials are trying to work out how to better communicate their procurement needs with industry so that companies can invest in production for the long-term. And while they want to replenish stocks, governments also need to be wary about excessive stockpiling given the shelf lives of some weapons.

That constraint was highlighted in August, when Spanish Defense Minister Margarita Robles said her government wouldn’t send Ukraine the Leopard tanks it had been considering after finding them in a deplorable state after years of disuse, according to media reports.

“The industry both in our country and around the world want to know, is there a sustainable longer-range plan for this production,” William LaPlante, the U.S. defense acquisition chief, told reporters after the national armaments directors meeting. “And not that this will be something which has traditionally been feast or famine; that we go into panic mode, we increase production, and then when the crisis passed, we just go back to minimal production again.”

LaPlante said allies were looking into setting clearer standards. That would, for example, allow for ammunition to be used in artillery produced somewhere else, while countries would consider joint procurement to create larger quantity orders for industry.

While defense spending has become a priority since Russia’s invasion, it’s unclear how long that will remain the case, particularly in Europe, where nations face a potential energy crisis this winter, according to Lucie Béraud-Sudreau, director of the military expenditure and arms production program at the Stockholm International Peace Research Institute.

Countries’ spending needs are going to increase further if they want to keep pace with China, when it comes to investing in emerging technology, she said.

“With the difficult economic situation we’re getting into, there’s going to be trade offs,” Béraud-Sudreau said. “There are tough decisions coming for European governments.”