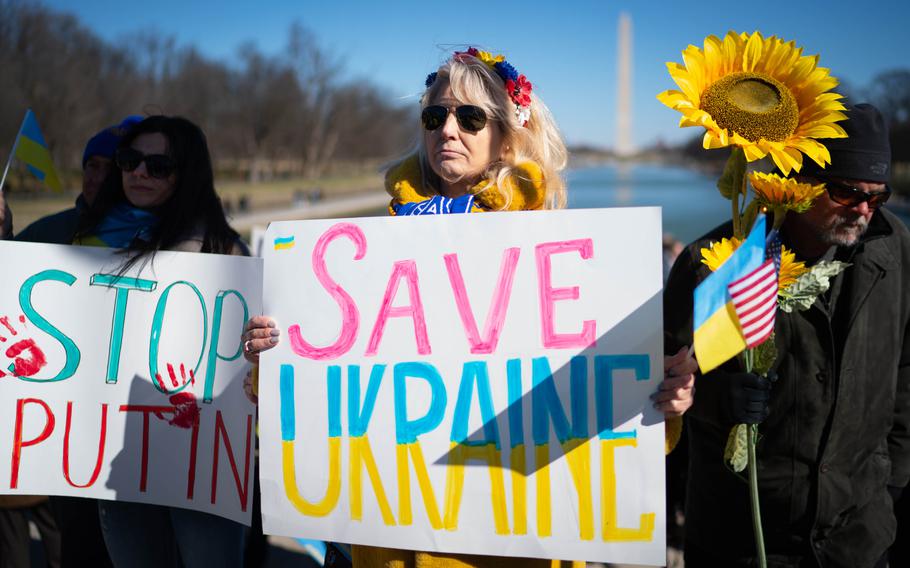 A demonstration in Washington this year urges support for Ukraine and presses President Biden to take a stronger stance against Russia. (Sarah L. Voisin/The Washington Post)

WASHINGTON — President Biden has held hours of conversations in recent months with Indian Prime Minister Narendra Modi, South African President Cyril Ramaphosa and other foreign leaders who have not always supported the Western coalition against Ukraine, urging them to stand firm against Russian President Vladimir Putin.

So — whether through Biden's efforts or not — the White House was pleasantly surprised when Modi confronted Putin at a summit last month, lecturing him that "today's era is not of war" and that Putin should "move onto a path of peace," comments unusual for a leader who has gone to great lengths to remain neutral in the Russia-Ukraine conflict, according to a senior White House official who spoke on the condition of anonymity to discuss private conversations.

As these discussions show, Biden is now pushing hard to hold together what has become a central mission of his presidency: maintaining the global and domestic coalition supporting Ukraine. As the war heads into its first winter, probably a bitter and brutal one, some U.S. allies face economic headwinds fueled by the war, while at home some Republicans voice skepticism about the billions in aid going to Ukraine.

These efforts face a major test Wednesday when the United Nations votes on a draft resolution condemning Russia's annexation of four parts of Ukraine. Biden and U.S. officials have been working to convince nonaligned countries in Latin America, Asia and Africa to refrain from taking a neutral position and condemn the Kremlin outright, an effort analysts said might be bolstered by Russia's barrage of missile attacks Monday on Kyiv and other major Ukrainian cities.

U.S. leaders are hoping at least 100 of the 193 U.N. member states — the number that supported a 2014 U.N. resolution condemning Russia's annexation of Crimea — will support the draft resolution, several senior administration officials said. In March, when the United States first offered a U.N. resolution condemning Russia's invasion, it received support from 141 member states; arguably, fewer votes than that will mean diplomatic ground has been lost.

Biden and the Group of Seven leaders are set to hold a virtual meeting Tuesday morning "to discuss their unwavering commitment to support Ukraine and hold Putin accountable in the face of Russia's aggression and atrocities," including Monday's missile strikes, according to a White House schedule. Ukrainian President Volodymyr Zelenskyy will join leaders at the start of the meeting.

Even as Biden scrambles to hold together his global coalition, cracks are showing in political support at home for the billions in aid the United States is sending Ukraine. Those fissures are likely to widen significantly if Republicans recapture the House on Nov. 8.

A Pew Research poll shows that the share of Americans who are extremely or very concerned about a Ukrainian defeat fell from 55 percent in May to 38 percent in September. Among Republicans and Republican-leaning independents, 32 percent say the United States is providing too much support for the war — up from 9 percent in March.

Some U.S. officials admit privately that despite Modi's surprise confrontation with Putin, they are skeptical they will see a breakthrough with India, which has extensive political and military ties with Russia. But they are hopeful that Putin's missile barrage on Monday will help persuade South Africa and other countries.

"This will remind a lot of U.N. members that Ukraine is the victim in this war," said Richard Gowan, a U.N. expert at the International Crisis Group. "That has, to some extent, got lost in recent U.N. debates, with a lot of U.N. members calling for peace in rather vague terms." While Ukraine's recent military successes may have given the impression that it needed less help, he said, "these strikes may rebalance diplomats' reading of the situation."

But diplomacy has not been easy. Developing countries in Africa, South America and Southeast Asia have been disproportionately hurt by the rising fuel prices and a global food shortage driven by war. Biden, in talks with his counterparts, has gone to great lengths to argue that Russian aggression and blockades, not U.S. sanctions, are responsible for their struggles, officials said.

Recent events have only added to the sense that the war will be a long slog. After a key strategic Russian bridge was spectacularly blown up Saturday, which Putin blamed on Ukraine, Moscow launched a furious counterattack on Monday targeting Kyiv and other Ukrainian cities.

Even before that, fighting on both sides had escalated in recent weeks. U.S. officials expect the fighting to slow during the Ukrainian winter, when cold weather and muddy conditions will hobble military operations. But with Ukraine and Russia both apparently convinced they can and must win, negotiations seem a long way off, especially with Putin's annexation and recent mobilization of up to 300,000 reservists.

So far, the White House has been able to maintain bipartisan support for several multibillion-dollar aid and weapons packages to Ukraine, but some Republicans aligned with former president Donald Trump have begun raising questions about why the United States is spending so much money on a distant war overseas. And a decision last week by a Saudi- and Russian-led coalition to slash oil production is likely to send gas prices climbing again, which could sour the public even further.

"Maintaining support here and in Congress, and with the broader American public, is something we do think about and recognize over time will increasingly become a challenge, inevitably," a senior administration official said. "But there are probably people who would have thought even at this point, seven months into the conflict, that we would have a hard time with what remains pretty bipartisan unity."

Europe is also racing for a winter of high fuel prices, threatening support from that quarter, though European leaders also remain sharply opposed to Putin and his agenda on the continent.

Biden and Zelenskyy have spoken regularly since the war began, often every two to three weeks, White House officials said. The two spoke again on Monday, when Biden expressed his condemnation of Russia's missile strikes and pledged to provide Ukraine "with the support needed to defend itself," according to a White House readout of the call.

But the relationship has not always been smooth.

Early in the war, Zelenskyy called repeatedly and publicly on the United States and other Western countries to do more — to send additional weapons and impose harsher sanctions on Russia — even as Biden and Congress were already sending unprecedented amounts of aid and advanced weapons to Kyiv.

Biden understood as a fellow politician that Zelenskyy had to advocate forcefully for his people, but he also told the Ukrainian leader privately that it would be hard for him to keep asking Congress for money if Zelenskyy appeared ungrateful and kept saying it was not enough, according to a former White House official, speaking on the condition of anonymity to describe private conversations.

Still, when asked how long the United States can be expected to pour billions into the war effort, Biden and his top aides frequently say: "As long as it takes."

Privately, U.S. officials say neither Russia nor Ukraine is capable of winning the war outright, but they have ruled out the idea of pushing or even nudging Ukraine to the negotiating table. They say they do not know what the end of the war looks like, or how it might end or when, insisting that is up to Kyiv.

"That's a decision for the Ukrainians to make," a senior State Department official said. "Our job now is to help them be in absolutely the best position militarily on the battlefield … for that day when they do choose to go to the diplomatic table."

And Ukrainian officials now say they have less appetite to negotiate than ever before, given their recent battlefield successes and Russia's illegal annexation attempt.

Ukrainian forces have successfully recaptured key territories and cities, including the eastern city of Lyman, and they are making further inroads into the occupied areas of Luhansk Oblast. In the south, Ukraine's hard-fought slog has resulted in some gains along the Dnieper River toward the strategic city of Kherson.

The territorial gains came as Putin crossed a red line for Zelenskyy with the illegal annexation of four regions of Ukraine. For weeks, Zelenskyy had warned that such a move would be the death knell for future peace talks, and he signed a decree last week formally ruling out negotiations.

The Ukrainian president now says that only if Putin is removed from power would Ukraine consider coming back to the table. "We will negotiate with the new president," Zelenskyy said in a video address.

Moscow responded by saying it would not end its military operations if Kyiv refuses to negotiate.

All of this adds up to a war that looks increasingly open-ended, as even those in Zelenskyy's inner circle most open to exploring negotiations with Russia said Putin's annexations marked a fatal blow.

"Putin injected the virus of infinite war with his annexation move," said David Arakhamia, a top negotiator for Zelenskyy and the majority leader of Ukraine's parliament, in an interview. "Ukraine will never accept this."

Russia's action was not a complete surprise to the United States, since many officials had seen signs since last spring that Russia might make the brazen move of annexing territories. Biden asked his national security adviser, Jake Sullivan, and a "tiger team" to put together an approach and set of policy options for when Russia moved forward, a senior White House official said.

The United States also privately raised a potential annexation as something for other Western countries to focus on, including the United Kingdom, Germany and France. The U.K. also had intelligence showing Putin could go down that path, a senior administration official said.

On Sept. 21, the same day Putin ordered a partial military mobilization and expressed support for the staged referendums that were a precursor to annexation of Ukrainian territories, Biden was set to deliver a speech before the U.N. General Assembly. U.S. officials waited to see what Putin would say, then rewrote parts of Biden's speech that morning to forcefully condemn Putin's thinly veiled threat to use nuclear weapons and stage the sham referendums.

On the way over to U.N. headquarters, Biden was still reworking parts of his speech with Sullivan and Secretary of State Antony Blinken.

"Again, just today, President Putin has made overt nuclear threats against Europe and a reckless disregard for the responsibilities of the nonproliferation regime," Biden said, adding: "This world should see these outrageous acts for what they are."

The Washington Post's Karen DeYoung contributed to this report.