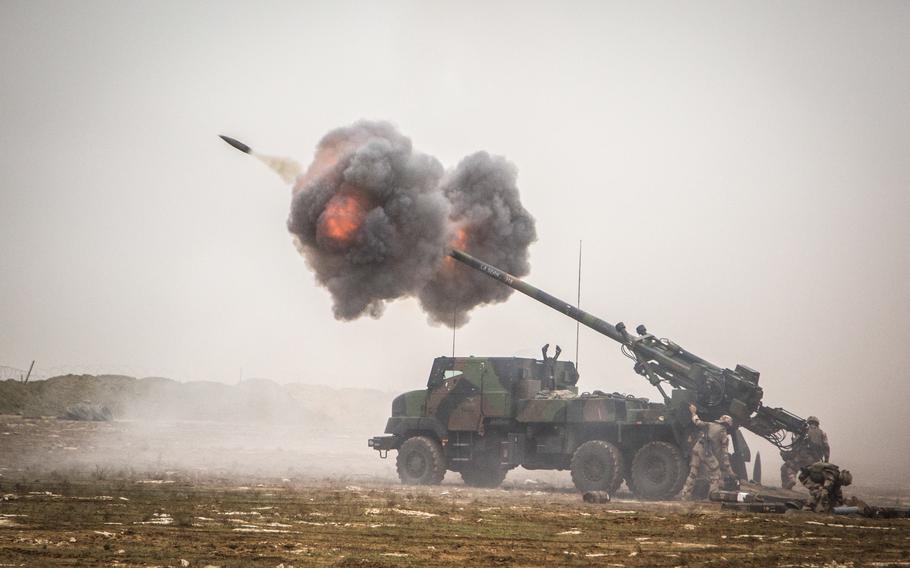 BRUSSELS — The string of strikes against Ukrainian cities and key infrastructure on Monday galvanized long-standing calls from the government to its allies for more sophisticated air defense systems and longer-range weapons.

The Russian attacks appeared to signal a significant escalation, raising pressure on the United States and other European countries that have been reluctant to provide Ukraine with the latest in military technology.

In a bid to avoid direct military conflict with Russia, Western allies have been slow to provide Ukrainian forces with the most advanced weapons systems — a trend that has persisted even as the Kremlin has repeatedly declared that its fight is not just with Ukraine, but against the United States and NATO.

Within hours of the strikes, Ukraine President Volodymyr Zelenskyy held emergency phone calls with French President Emmanuel Macron and German Chancellor Olaf Scholz to discuss air defense and other military aid. Zelenskyy said he will address an emergency meeting of the Group of Seven industrialized nations on Tuesday.

Amid the rush of diplomacy, Russian President Vladimir Putin effectively made Zelensky’s case for air defense by threatening additional strikes.

“The best response to Russian missile terror is the supply of antiaircraft and antimissile systems to Ukraine — protect the sky over Ukraine!” Defense Minister Oleksii Reznikov tweeted Monday. “This will protect our cities and our people. This will protect the future of Europe.”

Even before the strikes Monday, the country’s top officials were loudly proclaiming the need to boost air defenses.

Estonia’s Prime Minister Kaja Kallas, in a video message delivered with European Commission President Ursula von der Leyen on Monday said we have to “deliver air defenses from the allied side so that Ukrainians can protect their cities and civilians because Russia is definitely escalating to harming civilians.”

Ukraine’s military said that in Monday’s attack, its air defenses took down 43 of the 83 missiles launched at it.

The German Defense Ministry said Monday that the first of four IRIS-T air defense systems promised to Ukraine would arrive in the “next few days,” and Foreign Minister Annalena Baerbock said Germany is doing “everything we can” to quickly reinforce Ukraine.

“Residents of Kyiv in fear of death in the morning traffic. An impact crater next to a playground,” she tweeted. “It is vile & unjustifiable that Putin is firing rockets at cities and civilians.”

In the phone call with Zelensky on Monday morning, Macron pledged increased support for Ukraine, including more military equipment, but there are growing questions over the extent to which the French are actually living up to their promises.

A recent ranking by the Kiel Institute for the World Economy concluded that France has spent less on announced weapons deliveries to Ukraine than much smaller European nations like Estonia and the Czech Republic. Overall, France ranked as only the 11th-biggest global supplier of Ukrainian military aid by August — a “humiliating” result for a country that views itself as the E.U.’s leading military power, critics say.

Ukraine is interested in air defense systems used by the French military, including the SAMP/T. The Le Monde newspaper reported that one reason for France’s hesitation has been that the country has a limited stock of the necessary batteries.

French government officials have defended the extent of their support, citing “discretion” and suggesting that they have not disclosed all their supplies. They have also argued that their deliveries — including 18 highly accurate CAESAR self-propelled howitzer cannons — have been key additions on the battlefield. France is in negotiations to divert additional CAESAR cannons that were originally ordered by Denmark to Ukraine.

But the criticism that France has fallen behind smaller allies in aiding Ukraine appears to have struck a nerve at the Élysée Palace in recent days. As Macron met with other E.U. leaders in Prague on Friday, he announced the creation of a 100 million euro ($97 million) fund that will allow Ukraine to buy its own military equipment.

The fund is in addition to around $230 million France had committed to military aid but far behind the more than $17 billion that the Biden administration has sent Ukraine since February.

The Pentagon said in late September that it will deliver two advanced antiaircraft systems, called the National Advanced Surface-to-Air Missile System, or NASAMS, within the next two months — something Ukraine had long been asking for.