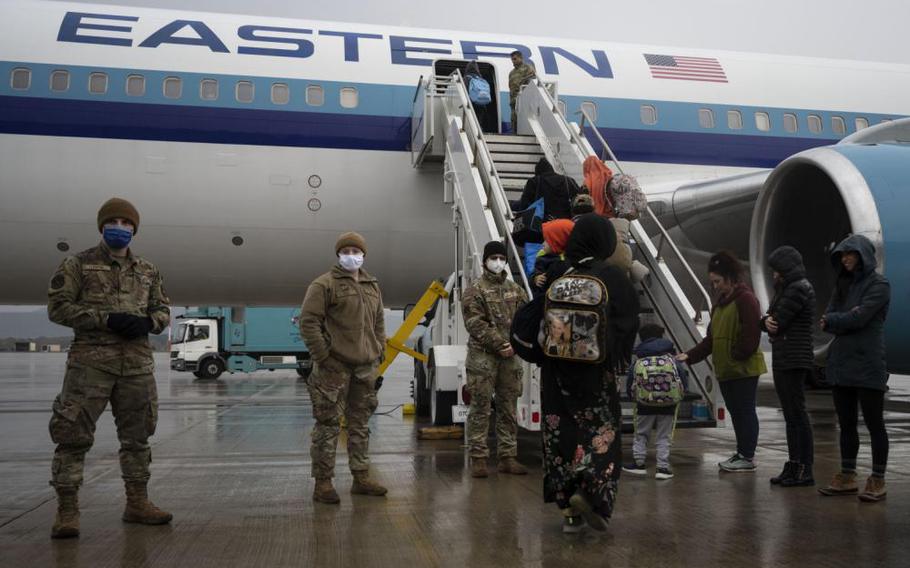 Afghan evacuees board the final flight to the United States from Ramstein Air Base, Germany, Oct. 30, 2021. (Milton Hamilton/U.S. Air Force)

KAISERSLAUTERN, Germany — The last Afghan evacuees departed Ramstein Air Base on Saturday, the Air Force said, ending the base’s role in one of the largest humanitarian airlift missions in U.S. history.

Air Force photos of the last flight showed Afghans bundled up in coats and carrying only one or two pieces of small luggage while boarding a plane in the rain.

Base officials did not say how many Afghans left on Saturday. Around 160 evacuees were still at Ramstein about two weeks ago, including eight evacuees who tested positive for coronavirus and 58 of their relatives, base officials said then. Those that tested positive during mandatory pre-departure screening were kept in isolation with family members until they were cleared for travel. 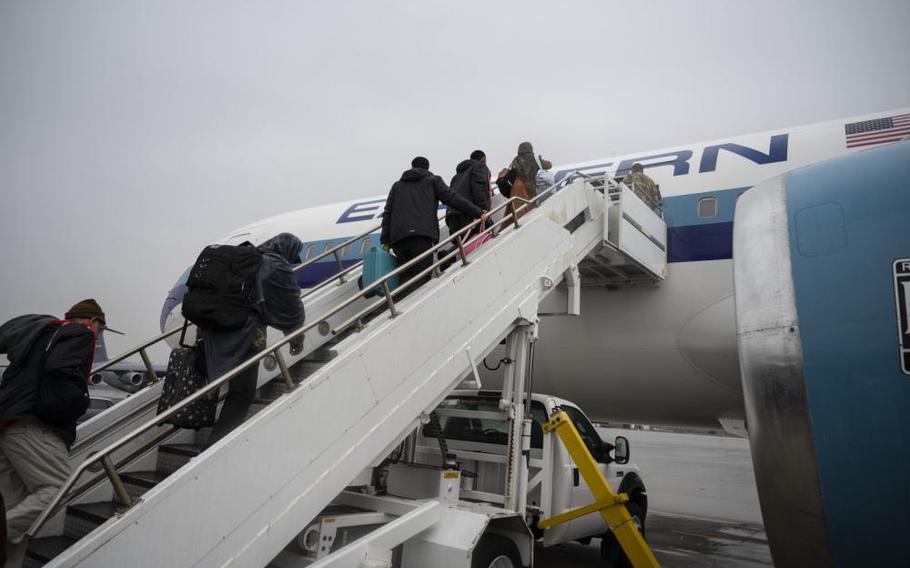 Since Aug. 20, more than 34,900 Afghan evacuees traveled through Ramstein, having fled their homes in the wake of the Taliban’s swift takeover of the country following the U.S. military’s departure. Most have traveled on to the United States to start a new life.

“I remain incredibly proud of the immense work the entire team has done throughout this operation,” said Brig. Gen. Josh Olson, the 86th Airlift Wing commander, in a statement Saturday. “We ran to our nation’s call and met multiple challenges that we neither expected nor trained for.”

The 86th Airlift Wing shared some numbers to illustrate the magnitude of the operation:

- About 6,500 airmen, soldiers and NATO allies from Kaiserslautern-area bases and other military installations provided direct support and expertise in the areas of logistics, civil engineering, security, sanitation, and medical care.

- More than 1.5 million meals were served to evacuees at Ramstein and the Army’s Rhine Ordnance Barracks.

- At the height of the evacuation, about 21,000 evacuees were awaiting onward travel at Ramstein and ROB.

- Thirty- nine babies were born, including one on a U.S. Air Force C-17 moments after the plane landed at Ramstein.