‘We didn’t know what to say’: Communication is key to Ramstein support of Afghan evacuees Hundreds of children were queued up for a midday snack of fruit and juice. Glisson said hello, smiled and exchanged high-fives and fist bumps with the less timid in the crowd.

As the camp commander, Glisson has the enormous task of managing the day-to-day operations of housing, feeding, protecting and transporting evacuees at Ramstein.

“It’s just been an incredibly fast learning curve for us as we figured out the human element,” said Glisson, who’s also the 86th Mission Support Group commander at the Ramstein base.

At the height of the largest U.S. air evacuation mission in history, Glisson and her team learned to build tents incredibly fast and distribute tens of thousands of meals per day to support a peak of 21,000 people between Ramstein and the Army’s Rhine Ordnance Barracks.

As of Tuesday morning, a combined nearly 12,000 evacuees were at the two bases awaiting further transit. An additional 230 were expected to arrive within 12 hours.

But the biggest success, Glisson said, was identifying early on that communication was critical, not just for the military and civilian personnel supporting the mission but also for the Afghans, she said.

While she made the rounds, an Afghan named Alex, who had been an interpreter for U.S. forces, thanked Glisson.

“You guys are working hard” to make camp comfortable, he told Glisson last week. But he had a request: Could the Afghan soldiers in camp from the same unit, who fought together for many years and are like family, move forward together to the next destination?

Glisson said they’ll look into that. She thanked Alex and the other men gathered around for their support in Afghanistan for 20 years.

Her next stop was a tent shared by a family of 12. A father, who spoke little English, introduced Glisson to his twin teenage daughters with matching dimples and different-colored head scarves. He pointed to the feet of a boy who was wearing new sandals.

“I think he was trying to say thank you because we have been able to provide shoes and scarves for his family,” Glisson said. 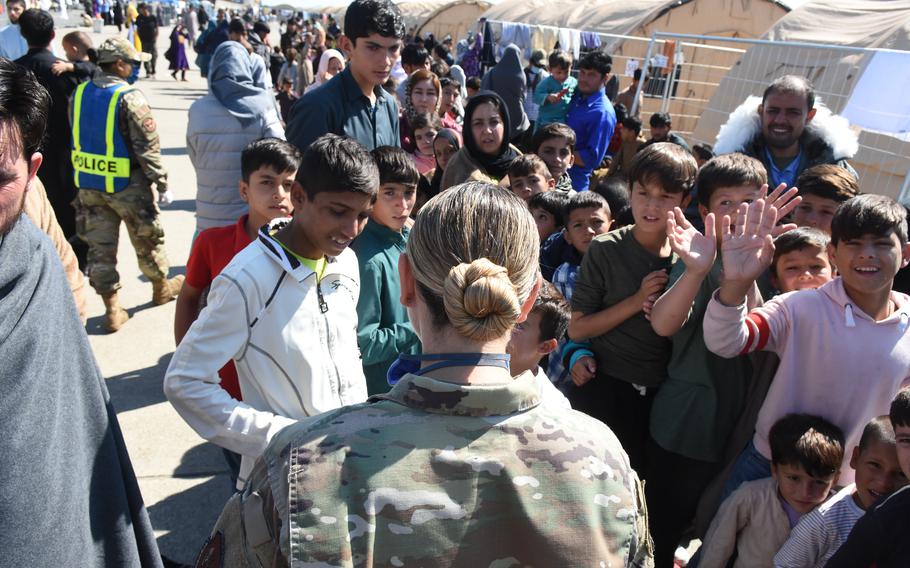 Buy Photo
Air Force Col. Amy Glisson visits with children inside temporary living facilities at Ramstein Air Base, Germany, for evacuees from Afghanistan, Sept. 2, 2021. Glisson, the 86th Mission Support Group commander at Ramstein, is the camp commander for the day-to-day operations of receiving, housing and sending tens of thousands of evacuees on to the United States. (Jennifer H .Svan/Stars and Stripes) Buy Photo
Air Force Col. Amy Glisson kneels down to speak with a child inside the temporary living facilities at Ramstein Air Base, Germany, for evacuees from Afghanistan, Sept. 2, 2021. Glisson, the 86th Mission Support Group commander at Ramstein, is the camp commander for the day-to-day operations of receiving, housing and sending tens of thousands of evacuees on to the United States. (Jennifer H .Svan/Stars and Stripes)

“We didn’t really know what to say”

Glisson’s memory of the night Ramstein welcomed its first guests on Aug. 20 is vivid. The moon shone brightly as 45 evacuees walked toward the Red Cross table to pick up hygiene care packages.

“All of a sudden, the call to prayer went out,” Glisson recalled. “Everyone kind of paused. We waited, and as soon as the call to prayer was over, the first Afghans stepped across the line into our camp. It was a very surreal moment for all of us that were out there.”

But what also stands out for Glisson about that initial welcome is what wasn’t said. “We didn’t communicate with them because we didn’t really know what to say. We’d never done this before,” she said.

“In the first 12 to 18 hours, we started to see a little bit of a struggle inside that camp,” Glisson said. “We didn’t understand what it was. Folks were frustrated.”

They “cracked the code,” with help from elders in the first group, who approached the Americans and said, “We need to help you help us,” Glisson said. “We sat down and had our very first elders meeting.”

The Afghans arrive with few personal belongings and many questions about their future, their families and their basic needs: How long are we going to be here; is there enough food; can we get more blankets; is there clothing; where are our bags; is there Wi-Fi to reach family back home?

“There are so many unknowns,” Glisson said. “We found that sharing that information with the elders and asking them to share that across this community, that there is enough food, that there is enough water. Once that message began to spread, we had a lot less anxiety at food lines, people weren’t grabbing for extra blankets. There was a sense of calm.”

They soon made sure to begin communicating with Afghans as soon as they arrived. 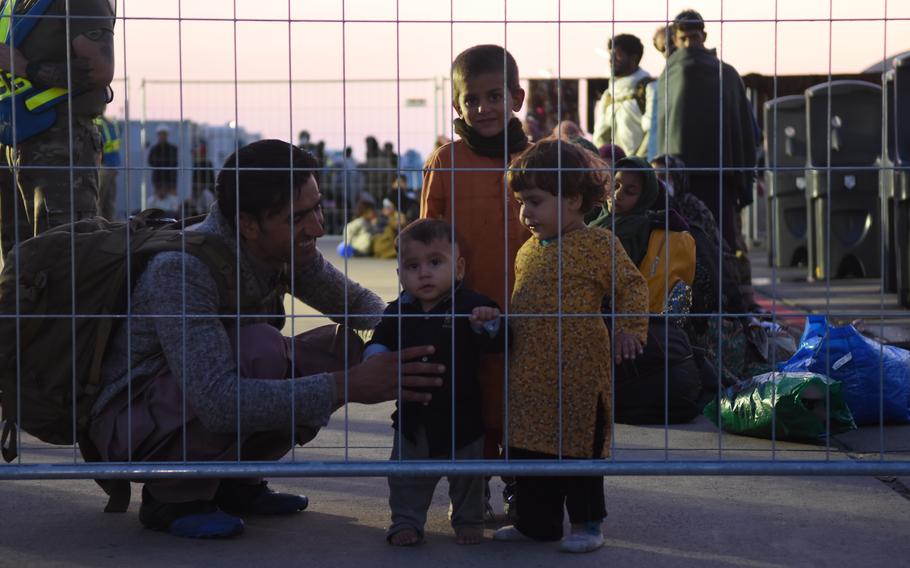 Buy Photo
An Afghan family prepares with others to depart Ramstein Air Base, Germany, Sept. 2, 2021. So far more than 22,000 evacuees from Afghanistan have flown through Ramstein to the United States or other destinations. (Jennifer H. Svan/Stars and Stripes) 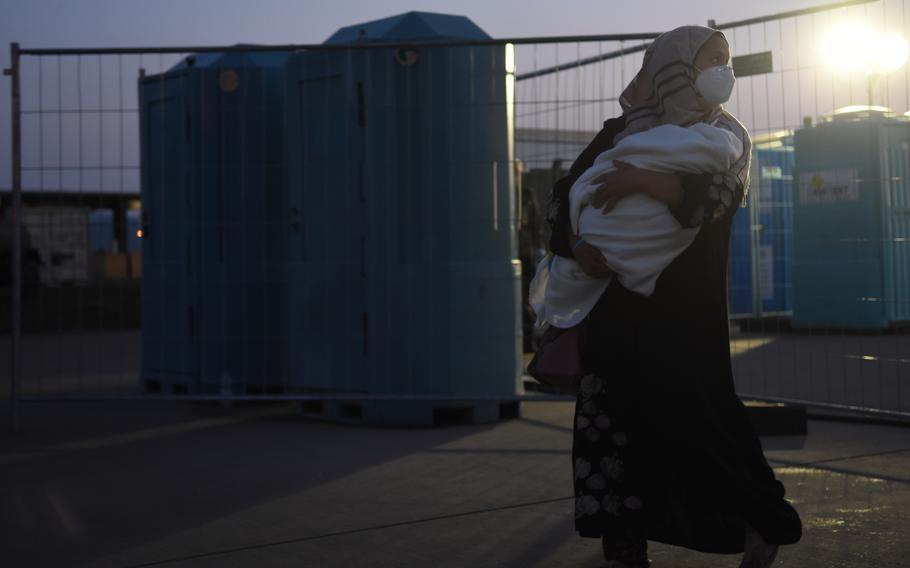 Buy Photo
An Afghan woman clutches her baby before preparing to depart on a flight from Ramstein Air Base, Germany, to the United States, Sept. 2, 2021. So far more than 22,000 evacuees from Afghanistan have flown through Ramstein to the United States or other destinations. (Jennifer H. Svan/Stars and Stripes) 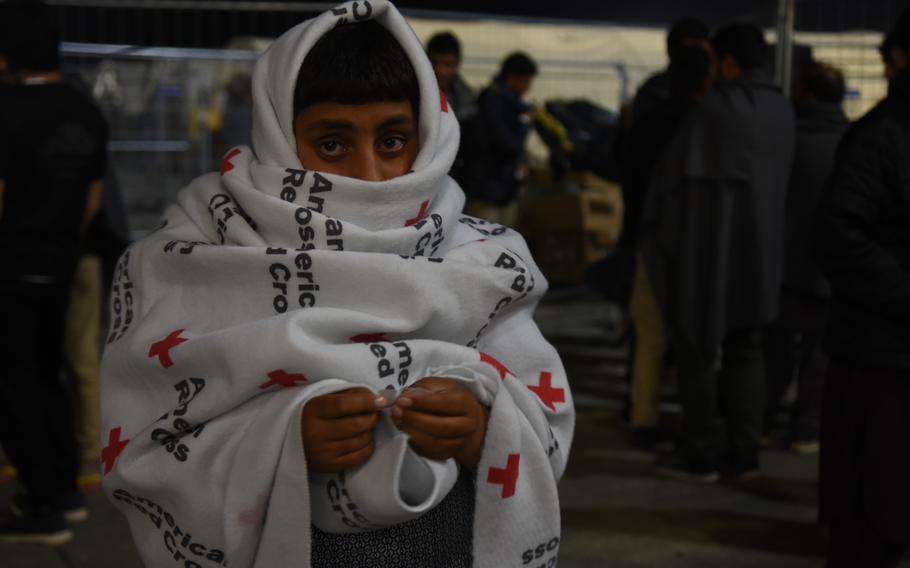 Buy Photo
An Afghan boy keeps warm inside a Red Cross blanket during a recent chilly night inside the temporary living facilities for evacuees from Afghanistan at Ramstein Air Base, Germany, Sept. 2, 2021. (Jennifer H. Svan/Stars and Stripes)

Also facilitating communication with evacuees is the cultural engagement team. The core of the team consists of two public affairs officers and two Special Forces soldiers, the latter chosen for their understanding of the nuances of Afghan culture shaped by previous deployments to Afghanistan.

They remind the many U.S. military reinforcements and volunteers “of the hell that these people went through to get here,” said one of the soldiers, who base officials said could not be identified because of the nature of his job. “They’re amped-up, they’re stressed, they just lost their homes. Even when they’re arguing or demanding answers, we say, ‘Hey, take a step back, be patient.’”

Don’t treat the mission like a military operation, the Special Forces soldiers advised, because it’s not. It’s best to “let them handle their own stuff ... and how they want to do it.”

Using that approach, the evacuees have been allowed to make some modifications to camp. Families bunk together, so women and children aren't separated from the men.

Some Afghans opt to sleep on cardboard and blankets on the floor rather than on the cots provided by the military. They hand-wash their clothes with soap and water on metal trash can lids and drape them over the fence to dry instead of using washers and dryers.

Ramstein can’t provide Wi-Fi and cigarettes, two of the most common requests. The Wi-Fi signal is already notoriously bad near Ramstein’s flight line, and cigarettes and jet fuel don’t mix, base officials said.

But once evacuees settle in and their basic needs are met, they “ask for a little bit more,” such as hot tea, Glisson said.

Glisson would tell them, “We’re still trying to feed a lot of people. And that if you come back next week, I might have hot tea for you. And then they’ll laugh.” Most Afghans are eager to continue their journey rather than stick around for hot tea. But just this week, as more people depart Ramstein, the base was able to set up hot tea stations for evacuees, a base spokeswoman said Tuesday.