Evacuee processing speeds up at European bases, as 16,000 move on to US, general says 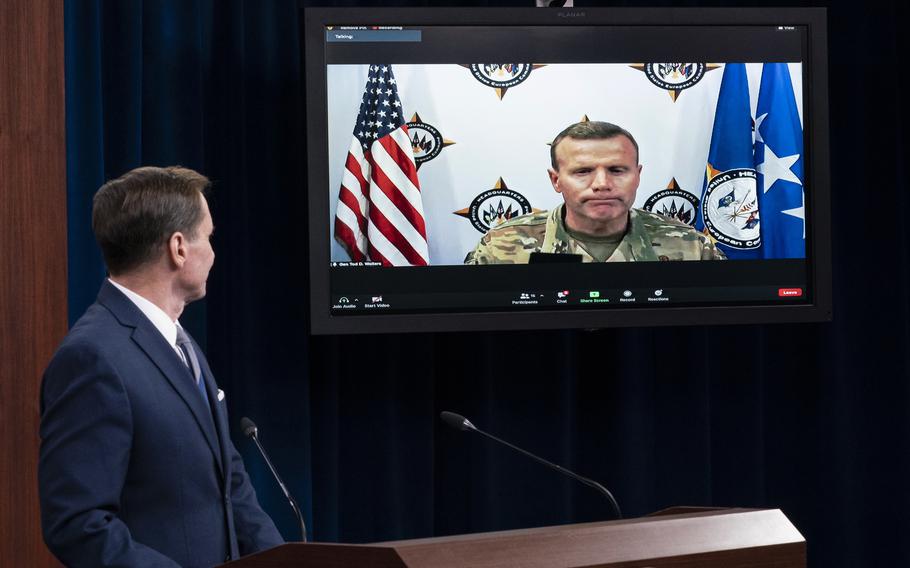 Some 38,000 Afghans have been evacuated from their country to four U.S. military bases in Europe during the past two weeks, and nearly half have since moved on to the United States, the top American general in Europe said Thursday.

The U.S. military has sped up the processes to move the Afghans through American hubs in Europe and the Middle East in recent days, as the Pentagon has worked to swiftly move eligible evacuees to American soil, said Air Force Gen. Tod Wolters, commander of U.S. European Command.

Wolters warned last week that the screening process had been moving at an unsustainably slow rate, with evacuees typically stuck at the European bases for days, and sometimes approaching the 10-day limit that host nations — Germany, Italy and Spain — agreed to allow U.S.-bound evacuees in their countries.

“We've refined this process over the course of the last 10 days,” Wolters said Thursday in a news briefing. “As you can well imagine if we wind up in situations where we are backed up with evacuees in certain locations, if the screening process is too exorbitantly slow, [then] we can wind up having some serious problems.”

Since evacuation operations began at the European bases — Ramstein Air Base and Rhine Ordinance Barracks in Germany, Naval Station Rota in Spain and Naval Air Station Sigonella in Italy — the military has moved from processing about 60 evacuees per hour to more than 250 per hour, Wolters said. He largely credited software improvements that allow security screening systems to work together more efficiently.

The U.S. military has been conducting biometric and biographic security screenings of all the Afghans aiming to enter the United States, which run their information through several databases overseen by the Defense Department, U.S. Customs and Border Protection and the FBI, Wolters said. Evacuees are screened when they first enter the U.S. bases in Europe, shortly before they board a flight to the United States and again once they arrive on American soil, he said.

To date, only one of the 38,000 Afghans to arrive at an American base in Europe has been flagged as having a problematic background. Wolters said the individual had been transferred into the “appropriate custody of U.S. interagency officials” in Germany. Asked if the individual was a member of the Islamic State’s Afghan affiliate, known as ISIS-K, or the Taliban, Wolters said he could not provide specific details about the case, but he understood the person was “not a high threat.”

Another 58 evacuees, Wolters said, had yet to clear the security screens as of Thursday, but he said he expected all of those individuals to be cleared in the coming days.

Meanwhile, the 20 U.S. troops injured in the ISIS-K bombing at Kabul’s airport last week as they worked to evacuate as many people from Afghanistan as possible, have left Landstuhl Regional Medical Center in Germany and they are recovering at Walter Reed National Military Medical Center in Bethesda, Md., officials said.

Top Marine Corps leaders, Gen. David Berger, the service commandant, and the Sergeant Major of the Marine Corps Troy Black, visited the 15 injured Marines at Walter Reed on Monday and Wednesday, according to the service.

One of the injured Marines was in critical condition, as of Thursday, a Marine statement said. Three were in serious condition and the other 11 were in stable condition. The condition of the other five wounded service members was not immediately available, a Pentagon official said.

“I want to extend our deepest sympathy to the families of the 13 heroes, who gave their lives to save so many Americans and so many Afghans” in the Aug. 26 bombing at Kabul’s Hamid Karzai International Airport, Wolters said Thursday. “We also extend our thoughts and prayers to all those wounded, and all the family members … [of] those who paid the ultimate price in Afghanistan over the course of the last two decades.