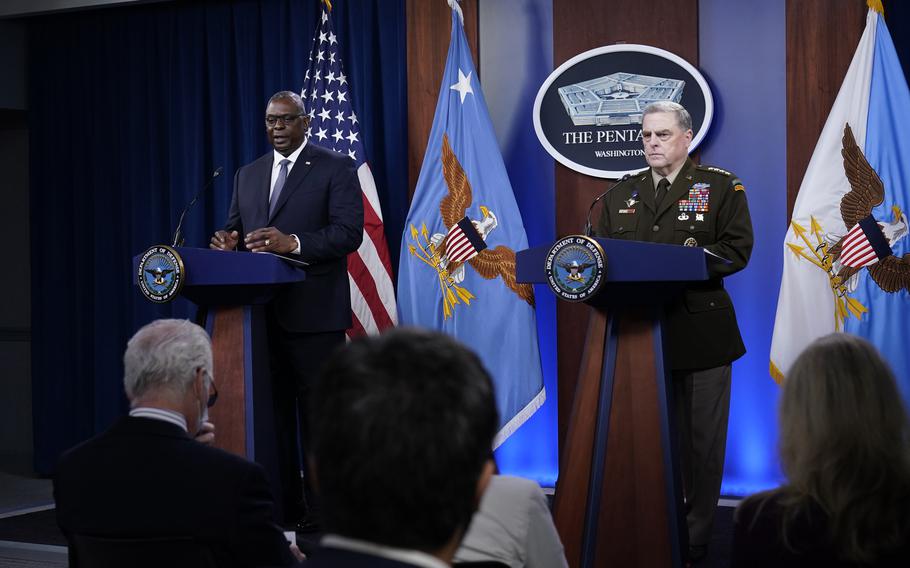 Secretary of Defense Lloyd Austin, left, answers a question during a briefing with Chairman of the Joint Chiefs of Staff Gen. Mark Milley, right, at the Pentagon in Washington, Wednesday, Sept. 1, 2021, about the end of the war in Afghanistan. (Susan Walsh/AP)

As of Wednesday, about 20,000 evacuees were at seven staging bases in countries in the Middle East, 23,000 others are now at seven U.S. bases in four European countries and about 20,000 are at eight military bases in the United States, according to Milley, chairman of the Joint Chiefs of Staff.

Austin said he will travel to the Persian Gulf region next week “to thank our partners there who have done so much to help save and shelter Afghan civilians.”

In total, U.S. and coalition forces evacuated 124,334 people out of Kabul on 778 flights, Milley said. Most of the evacuations took place after Aug. 14, when the U.S. increased its forces at the airport to speed operations as the Taliban closed in on Afghanistan’s capital.

But he said the evacuation mission came at a heavy cost. On Thursday, 13 troops and dozens of Afghans were killed when an Islamic State suicide bomber detonated an explosive vest and gunmen fired on crowds near a Kabul airport gate where troops were evacuating Americans, Afghans seeking special immigrant visas and others from Afghanistan.

“This mission cost 11 Marines, one soldier and one Navy corpsman their lives and 22 others were wounded in action. They literally gave their tomorrows for the tomorrows of people they never knew,” Milley said during the first news conference that he and Austin have conducted since troops pulled out of Afghanistan on Monday. “Those 124,000, they never knew the 13 who died. They will never know the 22 who are wounded and the thousands of dead and thousands of wounded who came before them. [But] they will now live in freedom, with American blood shed on their behalf.”

Despite the end of the war, Austin said the military will “do everything that we can to make sure we remain focused on ISIS-K,” or ISIS-Khorasan, the Afghanistan branch of the terrorist group that carried out Thursday's attack. About 2,000 “hardcore” ISIS-K fighters remain in Afghanistan, U.S. Central Command commander Gen. Frank McKenzie told reporters Tuesday at the Pentagon.

Though McKenzie and other defense officials have said ISIS-K and the Taliban are sworn enemies, Milley advised not to “make any leaps of logic” that the military will work with the Taliban on future counterterror efforts.

“We don't know what the future of the Taliban is, but I can tell you from personal experience that this is a ruthless group … and whether or not they change remains to be seen.”

Still, the U.S. coordinated with the Taliban during the evacuation mission, as the Taliban created and manned a security perimeter around the airport with checkpoints.

“We were working with Taliban on a very narrow set of issues, and it was just to get as many people out as we possibly could,” Milley said. “In war, you do what you must.”

Amid public criticism of the deadly evacuation mission that ended with up to 200 Americans and countless visa applicants and vulnerable Afghans left behind, Austin urged Americans to “unite to thank our service members for their courage and their compassion.”

“We have just concluded the largest air evacuation of civilians in American history. It was heroic. It was historic,” Austin said. “They were operating in an immensely dangerous and dynamic environment. Our troops were tireless, fearless and selfless. Our commanders never flinched.”

He commended U.S. troops for running an international airport, processing visas, feeding the hungry, "comfort[ing] the desperate" and getting “plane after plane into the sky” during the mission.

“Our forces risk their own lives to save the lives of others, and 13 of our very best paid the ultimate price — many of them were too young to personally remember the 9/11 [terrorist] attacks,” Austin said.

The Pentagon will study the evacuation mission and the two decades of war that preceded it, Milley said.

“We're going to learn from this experience as a military — how we got to this moment in Afghanistan will be analyzed and studied for years to come,” he said. “We in the military will approach this with humility, transparency and candor. [There] are many tactical, operational and strategic lessons to be learned.”

Looking back on the past 20 years, the Pentagon leaders expressed pride in the U.S. forces but pain over lives lost. In total, 2,461 U.S. troops died in Afghanistan during the war that the nation sent 800,000 service members to fight and spent more than $1 trillion supporting, Milley said.

“We are all conflicted with feelings of pain and anger, sorrow and sadness, combined with pride and resilience,” he said. “There are no words that I have, the secretary or [President Joe Biden] or anyone else will ever [have] to bring the dead back.”