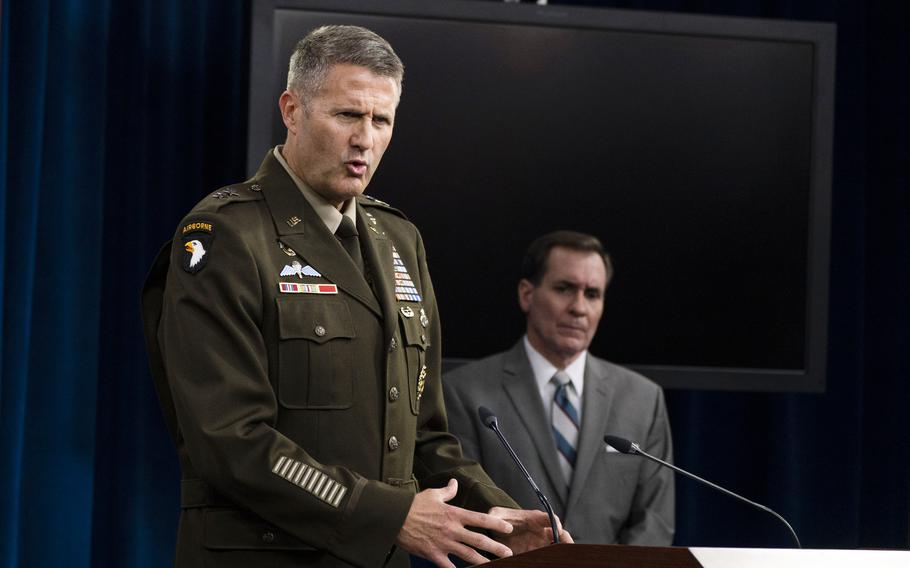 WASHINGTON — A soldier and sailor are among the 13 U.S. troops killed in the attack of a lone suicide bomber at a gate to the Kabul airport in Afghanistan, military officials confirmed Friday.

The troops killed in the attack Thursday also included 11 Marines, the service said. The Pentagon on Friday did not confirm the branches of service for 20 other service members wounded in the attack, though the Marines Corps did confirm some of the injured were Marines.

The attack happened at about 5:40 p.m. Kabul time when the suicide bomber detonated an explosive vest “right at or around” the airport’s Abbey Gate “followed by direct [gun]fire from an enemy position,” Army Maj. Gen. Hank Taylor, the Joint Staff’s deputy director for regional operations, said Friday.

The gate is one of three entrances to the airport where crowds of people had been gathered to vie for evacuation flights.

The Pentagon on Thursday reported a second explosion during the airport attack at the nearby Baron Hotel, but Taylor said that report was false.

“We're not sure how that report was provided,” he said. “It's not any surprise that in the confusion of very dynamic events like this can cause information sometimes to be misreported or garbled.”

The troops were conducting security checks on Afghan evacuees attempting to enter the airport when the attack happened. U.S. and coalition forces have been evacuating tens of thousands of Americans and Afghans since the Taliban took control of the country nearly two weeks ago.

The surviving injured troops were evacuated from Afghanistan on “specially equipped C-17s with embarked surgical units,” U.S. Central Command spokesman Navy Capt. Bill Urban said Thursday. The two flights with the wounded troops were taken to Ramstein Air Base, where they were transferred to Landstuhl Regional Medical Center — the largest American hospital outside the United States.

Though President Joe Biden on Thursday said the U.S. would “hunt down” the perpetrators of the attack, Taylor on Friday gave no details on how the military would do so after the more than 5,000 U.S. troops remaining in Afghanistan leave the country on Aug. 31.

“We have options there right now that we can ensure the commander has the ability to take action as those opportunities present themselves,” he said.

The Islamic State, which took credit for the attack on Thursday, continues to pose threats to U.S. forces on the ground, Chief Pentagon spokesman John Kirby said Friday.

“Obviously they are a serious terrorist threat, and that was brought home to us in pretty stark ways yesterday,” he said.

The mission will get more dangerous when the U.S. begins to move military assets out of Kabul as the Aug. 31 withdrawal deadline draws near, White House Press Secretary Jen Psaki said Friday.

Kirby said that process will start “as we get closer” to Tuesday.

“You're going to see us begin to make those muscle movements to pull out our troops and some of our equipment as appropriate with any retrograde,” he said. “What we want to do is preserve as much capability for as long as we can, both in terms of the security footprint but also in terms of the ability … to move out evacuees.”

Though the threat remains, Taylor said the evacuations must continue.

“We have seen firsthand how dangerous that mission is, but ISIS will not deter us from accomplishing this mission,” he said.

Despite the deadly attack, the military evacuated 8,500 people — including 300 Americans — in the past 24 hours on 29 C-17 and six C-130 transport aircraft, Taylor said. Coalition forces evacuated another 4,000 people on 54 aircraft during the same time.

After landing at secondary locations at U.S. bases overseas, evacuees are moved to military bases in the United States.

Since Aug. 14, the U.S. has evacuated approximately 104,200 people from Kabul — 5,100 of whom are American citizens, Taylor said. Many of the Afghan evacuees are seeking special immigrant visas for helping the U.S. during its nearly two decades in Afghanistan.

However, fewer than half of the Afghan evacuees who have arrived at bases in the U.S. had applied for special immigrant visas prior to evacuation, Air Force Gen. Glen VanHerck, commander of U.S. Northern Command, told reporters Friday at the Pentagon. Others could be applying for refugee status, have U.S. citizenship status or have a permanent resident card, which is more commonly known as a green card.

Four installations have been accepting evacuees, but Kirby said the number will increase to seven when Marine Corps Base Quantico and Fort Pickett in Virginia and Holloman Air Force Base in New Mexico begin taking in refugees.

Fort Lee in Virginia, Fort McCoy in Wisconsin, Fort Bliss in Texas and Joint Base McGuire-Dix-Lakehurst in New Jersey are the bases already hosting evacuees.

The bases in the U.S. hosting refugees were selected because "they had sufficient capacity [and] there was a capability in the region to support" the mission, VanHerck said.

In addition to housing, the military is providing health care and “culturally appropriate” Halal food for Muslim evacuees, the general said. Evacuees are also offered coronavirus vaccines upon arrival at Dulles International Airport near Washington, D.C., and at the installations.

VanHerck said he was proud of the services the bases are providing, especially after speaking to a families of evacuees at stateside bases.

"[One] father said they had what they needed and that it was the first time in a long time that he had slept without being afraid for his family’s safety," he said.

Those first four bases have the capacity to host about 21,000 evacuees, a number that will grow to 50,000 by Sept. 15 with the addition of the new bases, the general said. More bases could be added as needed, he said.