13 US service members killed, 18 wounded in attack on Kabul airport 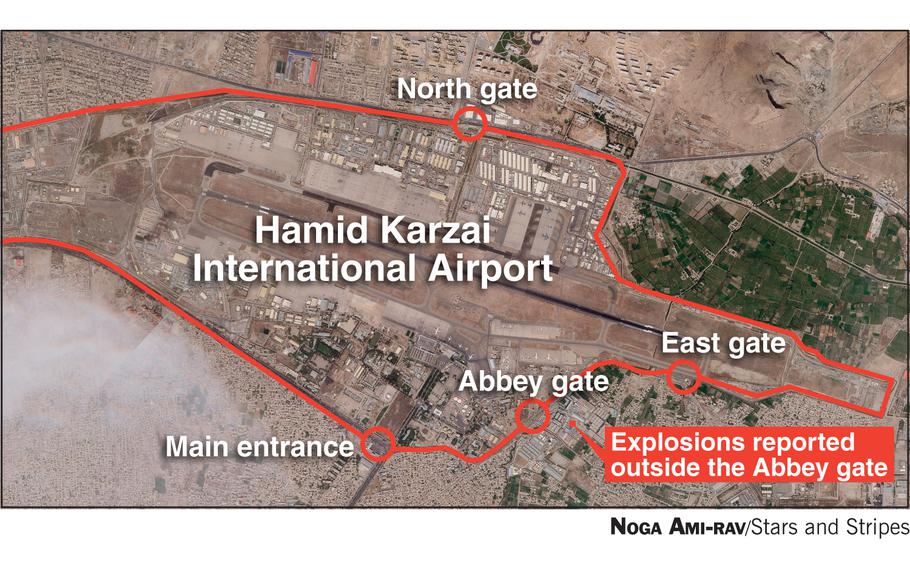 WASHINGTON — Thirteen U.S. service members were killed and 18 others were wounded Thursday in a terrorist attack at the airport in Kabul, where U.S. and coalition forces have been evacuating tens of thousands of Americans and Afghans since the Taliban took control of the country nearly two weeks ago, according to the Pentagon.

Two suicide bombers and an unknown number of gunmen launched attacks as the troops who were killed and injured screened evacuees at an airport gate, said Marine Gen. Frank McKenzie, the top U.S. commander in the region.

Ten of those killed and several of the injured were Marines, Maj. Jim Stenger, a Marine Corps spokesman, confirmed Thursday. Defense officials have not provided the service branches of the three others killed, though The Associated Press reported at least one Navy corpsman had died from the attack.

The service members killed were the first combat-related deaths to happen in Afghanistan since Feb. 8, 2020, when Sgt. 1st Class Antonio Rodriguez was killed in Nangarhar province, according to the Army. With 13 killed, it is also among the deadliest attacks on U.S. troops since the war in Afghanistan began nearly 20 years ago, Reuters reported.

The U.S. is working to determine who initiated the attacks, McKenzie told reporters at the Pentagon, though the Taliban is not suspected because “they have a practical reason for wanting us to get out of here.”

The Islamic State took credit for the attacks, according the Amaq News Agency, which is affiliated with the terrorist group. Pentagon officials had been warning of possible threats by ISIS-K, an Afghanistan-based branch of the Islamic State.

The first bomb exploded near the airport’s Abbey Gate, where ISIS gunmen fired on civilians and U.S. troops shortly after, McKenzie said. The gate is one of three entrances to the airport where crowds of people had been gathered since last week to vie for evacuation flights.

“At the screening points, you got to get very up close and personal to the people that you’re bringing out, there’s no way to do that safely from a distance,” the CENTCOM commander said. “We should all just bear in mind we’ve been doing it for well over a week we brought 104,000 people out.”

The second explosion happened shortly after the first one “at or near the Baron Hotel, a short distance from Abbey Gate,” Kirby said.

Kirby said Afghans were also hurt and killed in the attacks, though he did not know how many.

“The Islamic Emirate strongly condemns the bombing of civilians at Kabul airport, which took place in an area where U.S. forces are responsible for security,” Mujahid wrote in a tweet translated from Arabic. “The Islamic Emirate is paying close attention to the security and protection of its people, and evil circles will be strictly stopped.”

Images of bloodied Afghan men walking or being carted in wheel barrows away from the scene of the blast have been circulating on Twitter.

Since Aug. 14, the U.S. has evacuated approximately 95,700 Americans and Afghans who helped the U.S. during its nearly two decades in Afghanistan. The U.S. sent thousands of troops to Kabul to assist with the evacuations and provide security at the airport. There were 5,800 U.S. troops at the airport, though 400 were transported out of Kabul on Wednesday.

The attacks come after U.S. evacuation numbers slowed down after three consecutive days of exceeding its goal of moving 5,000-9,000 people per day from Kabul. Military aircraft lifted 5,100 people out of the country on Thursday, the White House said, compared to 11,200 people Tuesday, 12,700 on Monday, and 11,000 on Sunday.

The evacuation mission will continue despite the attacks, McKenzie said, noting about 1,000 Americans remain in Afghanistan. The U.S. is scheduled to pull out of Afghanistan on Tuesday.

However, Kirby on Wednesday said the U.S. military will need to start prioritizing troops and equipment in the final days leading up to the Aug. 31 deadline.

“We have put more than 5,000 U.S. service members at risk to save as many civilians as we can. It’s a noble mission,” McKenzie said. “Today, we have seen firsthand how dangerous that mission is. ISIS will not deter us from accomplishing the mission, I can assure you that.”

As the deadline draws near, hopeful evacuees on the ground in Kabul have reported rumors of the U.S. ending evacuations by Saturday, but Kirby on Thursday denied the reports.

“Evacuation operations in Kabul will not be wrapping up in 36 hours,” Kirby tweeted. “We will continue to evacuate as many people as we can until the end of the mission.”

NATO Secretary General Jens Stoltenberg condemned “the horrific terrorist attack” Thursday, tweeting “our priority remains to evacuate as many people to safety as quickly as possible.”

NATO forces have been assisting the U.S. with the operations, flying thousands of evacuees out of the country each day. On Thursday, 74 coalition aircraft moved 8,300 people from Kabul — besting the U.S.’s daily total, the White House said.