by
Karoun Demirjian and Alex Horton
• The Washington Post • August 28, 2021 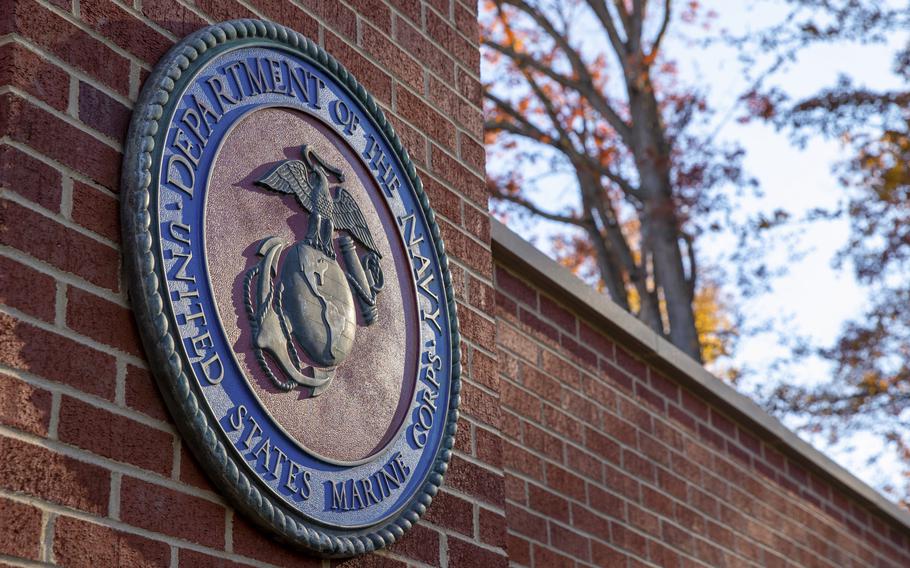 The Marine Corps medallion is seen at Gate One at Marine Corps Base Quantico in Virginia on Nov. 9, 2020. The Pentagon announced in August 2021 that the military will be able to accommodate up to 50,000 Afghan evacuees at seven bases, including Quantico, in the United States (Lance Cpl. Eric Huynh/U.S. Marine Corps)

The U.S. military is destroying equipment at the Kabul airport and more than doubling its temporary housing capacity on bases in the United States to extract as many people from Afghanistan as possible before Tuesday's withdrawal deadline.

The military will be able to accommodate up to 50,000 Afghans at seven bases and facilities in the United States, said Pentagon spokesman John Kirby, who announced that Holloman Air Force Base in New Mexico, and Fort Pickett and Marine Corps Base Quantico in Virginia had been added to the four installations already part of the operation.

The airlift, which as of Friday morning had carried upward of 110,000 people out of Kabul, is entering its last four days amid intense urgency, with Hamid Karzai International Airport reeling from a terrorist attack Thursday that killed13 U.S. service members and at least 170 others - the vast majority of them Afghans.

As of midday Friday,about 14,000 Afghan evacuees had arrived in the United States via Dulles International Airport, according to Virginia Gov. Ralph Northam, a Democrat. According to Air Force Gen. Glen VanHerck, the commander of U.S. Northern Command, 6,578 Afghans had arrived at the four military installations - Fort Lee in Virginia, Fort Bliss in Texas, Joint Base McGuire-Dix-Lakehurst in New Jersey and Fort McCoy in Wisconsin. Refugees who fled Afghanistan walk through the terminal to board a bus after arriving at Dulles International Airport on Aug. 27, 2021, in Chantilly, Va. (Ricky Carioti/Washington Post)

At least 25 countries have signed on to temporarily host or serve as way stations for the tens of thousands of other Afghans who have departed Kabul.

Once evacuees arrive in the United States, "we're prepared to house them and feed them as long as it takes to get them through the process," VanHerck told reporters Friday, noting that many of the arriving Afghans "have family already here in the United States, or they'll be relocated to places with Afghan populations."

Although the Pentagon has not yet released the names of the U.S. service members killed in Thursday's blast, several have been identified by their families and elected officials. Marine Lance Cpls. David Espinoza, 20, of Rio Bravo, Texas, Rylee McCollum, 20, of Bondurant, Wyo., Kareem Nikoui, 20, of Norco, Calif., and Jared Schmitz, 20, of Wentzville, Mo.; Marine Cpls. Hunter Lopez, 22, of Southern California, and Daegan William-Tyeler Page, 23, of Omaha; Marine Staff Sgt. Taylor Hoover, of Utah; and Navy Hospital Corpsman Max Soviak, of Berlin Heights, Ohio, were among the victims of an attack that U.S. officials initially described as a twin suicide bombing but on Friday said was a single blast just outside the airport's Abbey Gate.

The Islamic State's Afghanistan arm, known as ISIS-K, claimed responsibility for the attack, which was a sobering reminder of the grave threats hanging over the frantic evacuation operation - and the likelihood, according to Pentagon officials, that more attacks will be attempted before the effort has been completed.

On Friday, U.S. forces carried out a drone strike on an Islamic State planner in eastern Afghanistan, a Pentagon spokesman said. "The unmanned airstrike occurred in the Nangahar province of Afghanistan," said Navy Capt. Bill Urban. "Initial indications are that we killed the target. We know of no civilian casualties."

Kirby, the Pentagon spokesman, told reporters Friday that about 5,000 U.S. service members remain in Kabul but that there would be no more updates about their drawdown until all have left, in an effort to keep would-be attackers from exploiting potential vulnerabilities.

He described "specific,credible threats" to the U.S. presence in Kabul and warned that in the days remaining, the military would have to "balance" the demands of closing its operations at the airport with the mandate to get more civilians out of the country. To make more room on the planes for evacuees, the military is destroying equipment where possible instead of flying it out of Afghanistan, Kirby added.

"Lives are still the priority: The lives of our troops and, of course, the lives of evacuees, and continuing to get out as many as possible," Kirby said. "We want to prioritize passenger seats as much as possible."

Thursday's carnage at the airport worsened what already was a bleak situation for many Afghans fearful of returning to life under Taliban rule, who now also must worry about terrorist groups like the Islamic State further destabilizing their country.

Asked how many Islamic State members had been released into Afghanistan when Taliban fighters seized control of prisons and freed inmates as part of their defeat of the U.S.-backed Afghan government, Kirby could not say.

"I don't know the exact number. Clearly it's in the thousands, when you consider both prisons, because both of them were taken over by the Taliban and emptied," he said.

Yet people kept coming in the hope of escaping.

Still, the pace of evacuations is clearly slowing. Between 3 a.m. Eastern time Thursday and 3 a.m. Friday, 12,500 people - including about 300 American citizens - were flown out on a mix of U.S. military, charter and other aircraft. In addition, 4,200 people were evacuated between 3 a.m. and 3 p.m. Friday. Earlier this week, the daily totals peaked at over 21,000.

According to Army Maj. Gen. William Taylor, as of Friday morning, 5,400 people were waiting inside the airport perimeter for flights out of the country - slightly more than half of the approximately 10,000 people that the Kabul airport has been hosting in recent days.

"We have the ability to include evacuees on U.S. military airlift . . . until the very end," Taylor said. "ISIS will not deter us from accomplishing this mission."

In Europe, it is possible that Afghans could spend 10 to 14 days distributed among eight facilities, which have a combined capacity to host about 25,000 people, according to Gen. Tod D. Wolters, the supreme allied commander of NATO forces. Wolters told reporters this week that the average processing time for Afghans coming through Europe so far had been far shorter.

VanHerck, the head of U.S. Northern Command, told reporters Friday that it would take an estimated five to seven days to process and screen Afghan arrivals, whom he said account for about 40% of the people the military has brought into the United States since the evacuation began. The balance, he said, are U.S. citizens, green-card holders and others with designated status to be in the country.

He stressed that those arriving in the United States have already passed a security screening elsewhere and that the bulk of the processing they face while at U.S.-based military installations is medical in nature, or to get their paperwork for special immigrant and other status in order.

So far, most of the evacuees have come through Dulles International Airport, about 25 miles outside the District of Columbia, in Virginia. Some waited aboard the planes for up to 12 hours to be processed and cleared for entry.

The split between male and female Afghan evacuees is about 50-50, VanHerck said, noting that approximately 15% of arrivals are coming with children. One base had taken in 513 children, he said, about 30% of its evacuee population.

While on base, VanHerck said, evacuees are offered three "culturally appropriate," halal meals daily, as well as access to a 24-hour "grab and go" food that also has culturally sensitive options. Local community and aid organizations have been donating large amounts of clothing and other supplies.

While schooling facilities are not readily available, VanHerck said, people have donated books, educational equipment and sporting goods. At Fort Bliss, he added, soldiers have set up makeshift soccer fields to keep the children active and occupied.