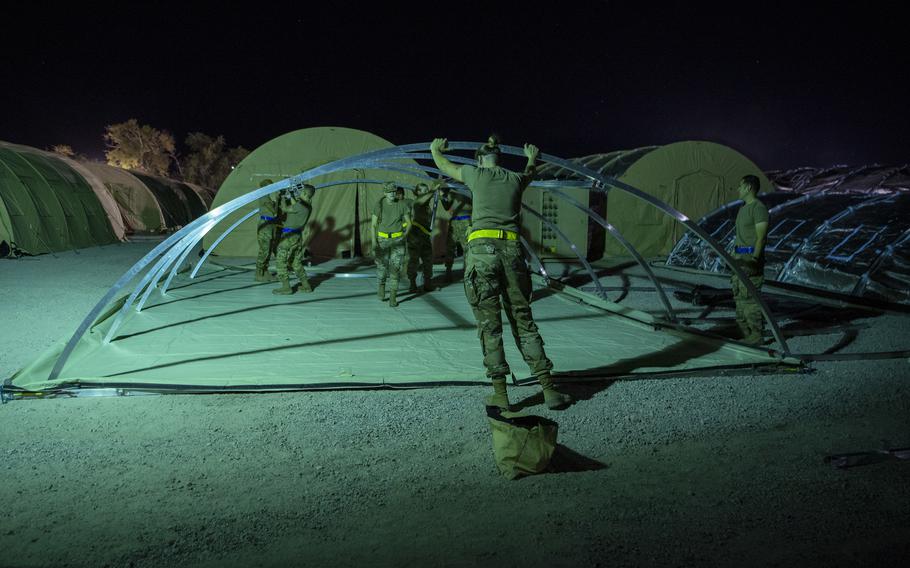 Airmen with the 635th Material Maintenance Squadron, 49th Civil Engineer Squadron, and the 49th Wing on Aug. 27, 2021, set up the foundation of a housing tent at Holloman Air Force Base, N.M. U.S. Northern Command is providing transportation, temporary housing, medical screening, and general support for up to 50,000 Afghan evacuees at suitable facilities, in permanent or temporary structures. (Jessica Sanchez-Chen/U.S. Air Force)

WASHINGTON — About 25,600 of the more than 124,000 people who U.S. and coalition forces evacuated from Afghanistan before the final flights took off from Kabul’s airport Monday are now living on military bases as they await approval to stay in the United States, Air Force Gen. Glen VanHerck said Friday.

There is now space for 36,000 Afghan evacuees on eight military installations in the United States and the Defense Department is working to boost that number to 50,000, said VanHerck, the commander of U.S. Northern Command. This comes as the clock runs down on the amount of time that Afghans can stay at temporary staging bases across Germany, Italy and Spain, according to chief Pentagon spokesman John Kirby.

“These countries have asked that we keep people no longer than 10 days at these [overseas] facilities,” he said. “We're working with the countries, we're grateful for their generosity and we're working very hard to meet those guidelines as best we can.”

Some evacuees are also being staged at bases in the Middle East, including Al Udeid Air Base in Qatar, where most of the first evacuees were taken. However, Kirby did not know Friday whether there is a limit to the amount of time that the evacuees can stay in those countries.

From the overseas locations, the evacuees are taken to Dulles International Airport near Washington, D.C., where they receive a coronavirus test before transferring to one of eight military bases for housing and medical care as their visas are processed.

“We continue to provide culturally appropriate food, water, bedding, religious services, recreational activities, and other services such as transportation from the port of entry to the location of accommodations and some medical services,” VanHerck said.

Evacuees are given a second coronavirus test upon arrival at the military bases, but VanHerck said very few have tested positive.

“There was no concern expressed by the commanders or any of the medical professionals about [coronavirus] positivity rates or testing,” he said.

VanHerck called it an “unprecedented effort” and he said the military’s capacity-building continues as they “quickly construct safe accommodations, arrange transportation and provide meals for Afghan guests.”

“Our top priority remains providing a safe and secure environment for our guests to continue their immigration process in order to transition into their new lives in the United States,” the general said. “The DOD has not wavered in its commitment to temporarily house our guests in the safest conditions.”

But just how temporary the evacuees’ stays will be is unclear and will vary from case to case, VanHerck said. The general gave no timeline for how long the U.S. bases will host Afghan evacuees.

"We're prepared to conduct the mission until completion, which will be determined by [the Department of Homeland Security]," VanHerck said.

As more evacuees come to the U.S., it’s possible additional bases could be tasked to open staging facilities, but he said he did “not anticipate needing any additional bases to reach the capacity we need of at least 50,000” at this time.

Wednesday will mark 10 days since the last evacuee left Afghanistan. While the evacuees must be out of the European nations that set the time limit, not all will be taken to the U.S. — some could be taken to other places without such limits, Kirby said, without detailing the locations.

Further, not all evacuees will move to the U.S., instead choosing to live in other countries, he said.

The bases in the U.S. accepting evacuees are Fort Bliss in Texas, Joint Base McGuire-Dix-Lakehurst in New Jersey, Fort McCoy in Wisconsin, Camp Atterbury in Indiana, Holloman Air Force Base in New Mexico, and Fort Lee, Fort Pickett and Marine Corps Base Quantico in Virginia.

“This has been a massive military, diplomatic and humanitarian undertaking, one of the most difficult in our nation's history, and an extraordinary feat of logistics and global coordination under some of the most challenging circumstances imaginable,” VanHerck said.