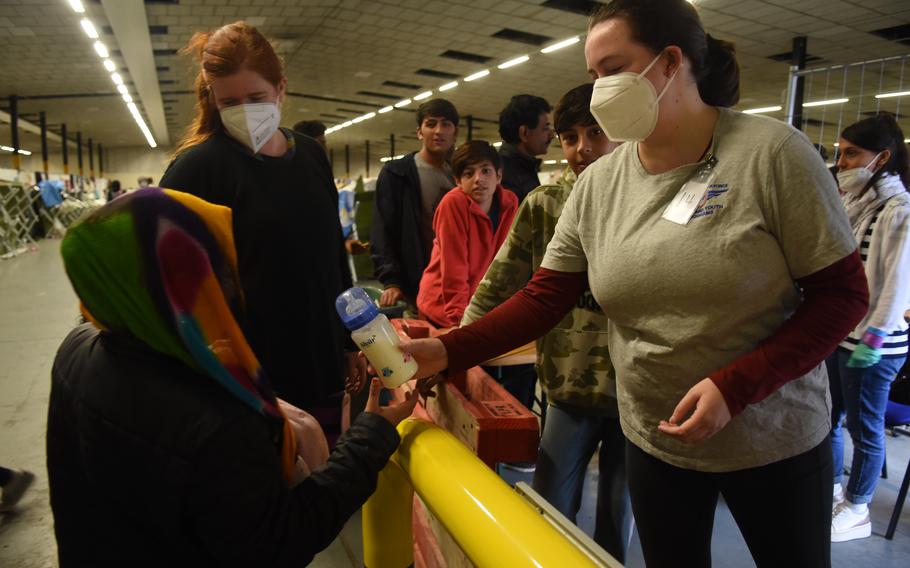 KAISERSLAUTERN, Germany — The line for formula usually starts forming in a Rhine Ordnance Barracks warehouse housing Afghan evacuees around breakfast time. Young children drink it in a cup or mix it with cereal, while mothers with babies ask for bottles.

Afghan teens, who speak some English and are eager to help, assist others to mix the formula and heat bottled water in a large electric tank.

The operation is run by a dedicated group of volunteers, who have sanitized more than 10,000 baby bottles and on a daily basis put a clean bottle in the hands of every mother or young child at ROB and Ramstein Air Base.

The bases have provided temporary lodging since Aug. 20 for tens of thousands of Afghans who fled their homes after the Taliban seized power. About 9,000 remain while waiting for flights to the United States to resume.

In the early days of supporting evacuees, generous donations from the U.S. military community could not keep up with the demand for baby bottles, said volunteer and military spouse Erin Gonzalez.

“We had given out hundreds if not thousands of bottles,” she said.

Mothers were using bottles to supplement their children’s nutrition or compensate for their inability to produce breast milk because of malnourishment and stress, Gonzalez said.

Gonzalez was told that mothers were throwing away smelly and moldy bottles because they had no way to clean them while living in temporary shelters on the flight line. Gonzalez and fellow volunteer Lisa Quadros went to work to find a solution. 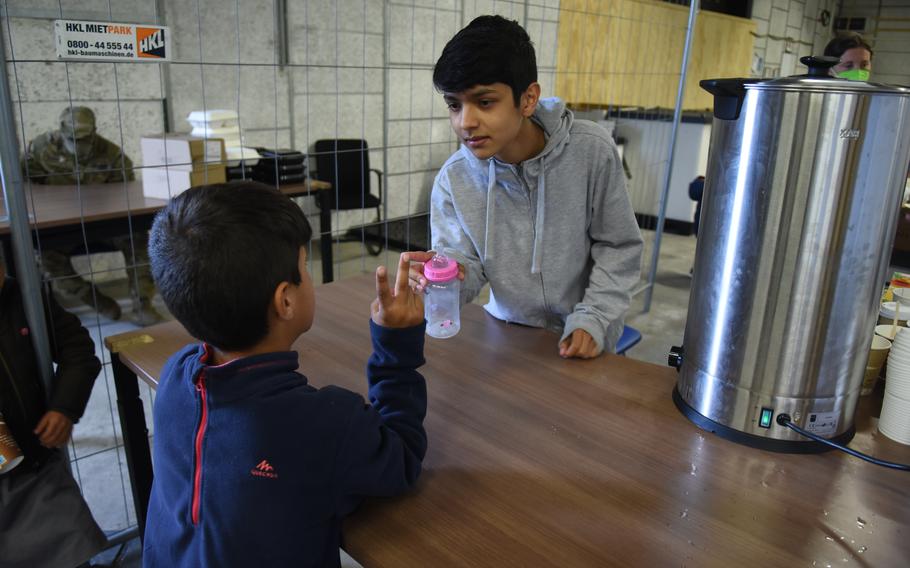 Buy Photo
Erfan Ahmadi, 14, takes requests for formula and tea while volunteering at Rhine Ordnance Barracks, Germany, on Sept. 20, 2021. Ahmadi and his family are evacuees from Afghanistan. He speaks Dari, Pashto and English and is one of several Afghan teens who translate for American volunteers at the stations where baby formula and hot tea are served. (Jennifer H. Svan/Stars and Stripes) 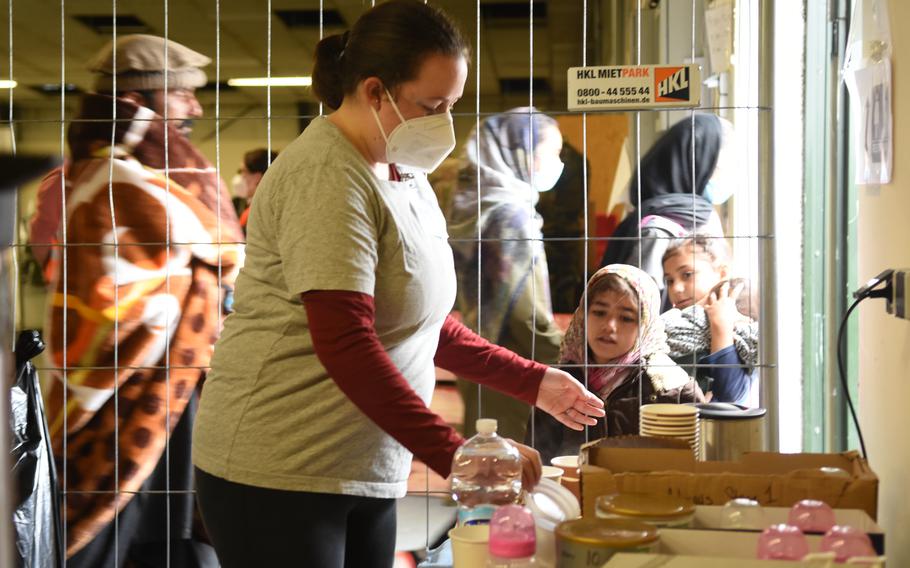 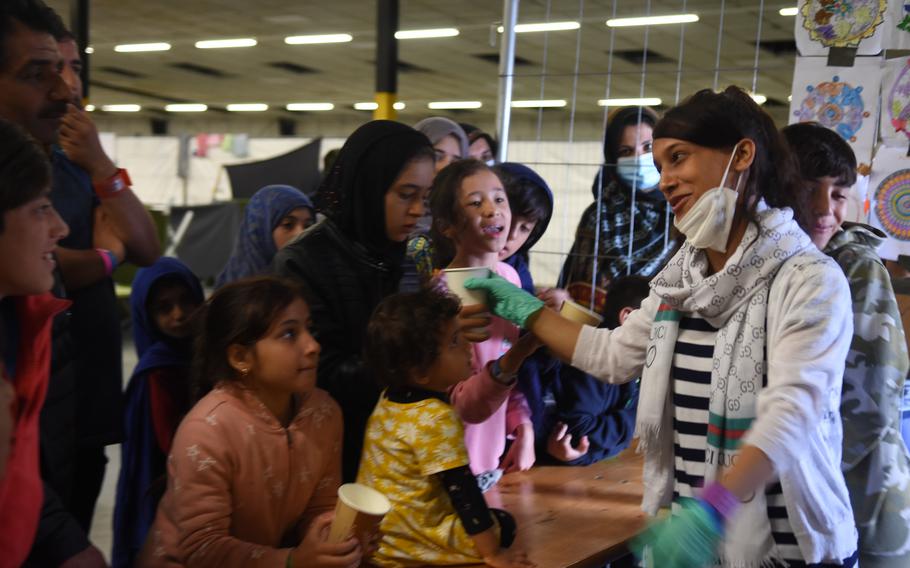 Buy Photo
Madina Fahim, 15, hands out cups of tea and formula at Rhine Ordnance Barracks, Germany, on Sept. 20, 2021. Fahim, whose family fled Afghanistan last month, practices her English while helping American volunteers take requests for formula and tea at the temporary living area for evacuees at ROB. She is eager to go to the United States, where she wants to study medicine. (Jennifer H. Svan/Stars and Stripes) 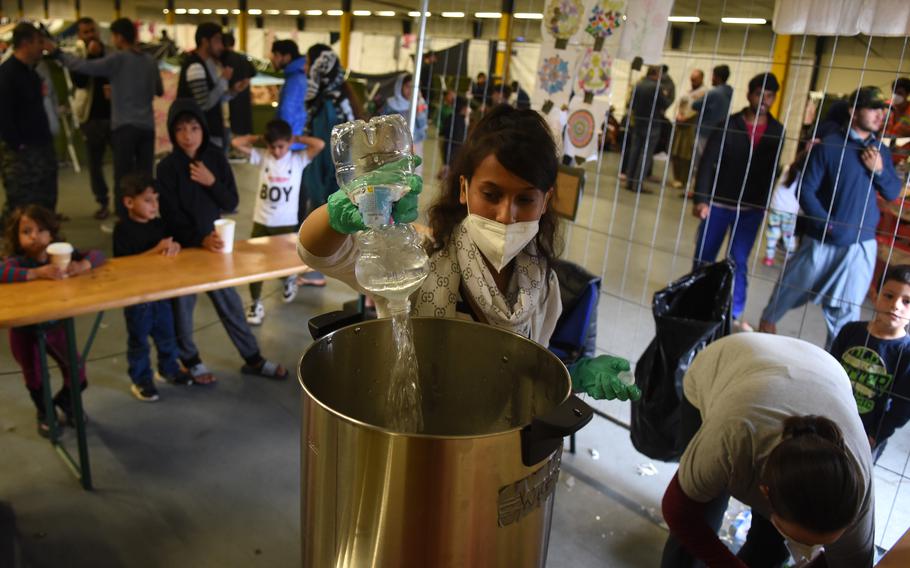 Buy Photo
Madina Fahim, 15, fills a tank with bottled water to be heated for formula and tea at Rhine Ordnance Barracks, Germany, on Monday, Sept. 20, 2021. She practices her English while helping American volunteers take requests for formula and tea at the temporary living area for Afghan evacuees at ROB. (Jennifer H. Svan/Stars and Stripes) 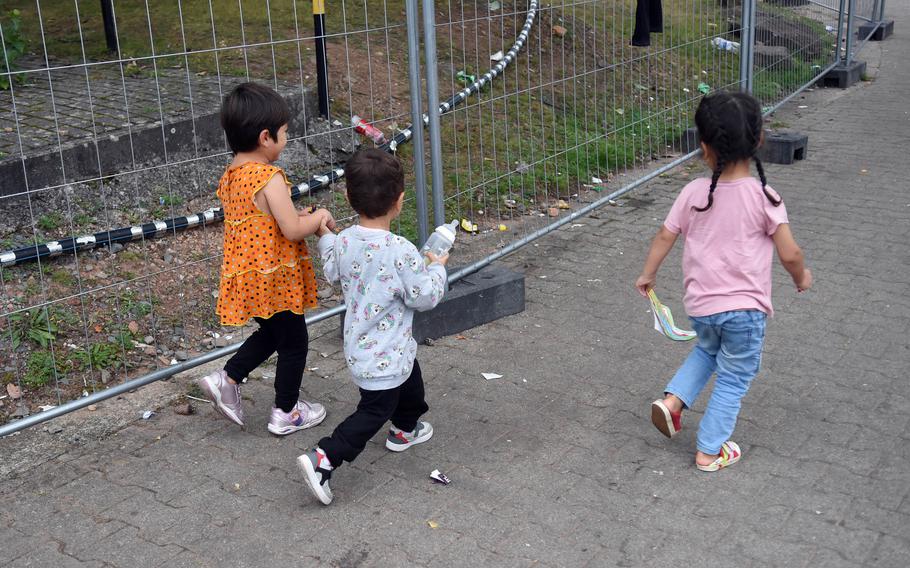 Buy Photo
A little boy carries an empty bottle in the temporary living area for Afghan evacuees at Rhine Ordnance Barracks, Germany, Sept. 20, 2021. Volunteers have been instrumental in ensuring that Afghan women and children there have clean bottles for formula. (Jennifer H. Svan/Stars and Stripes) 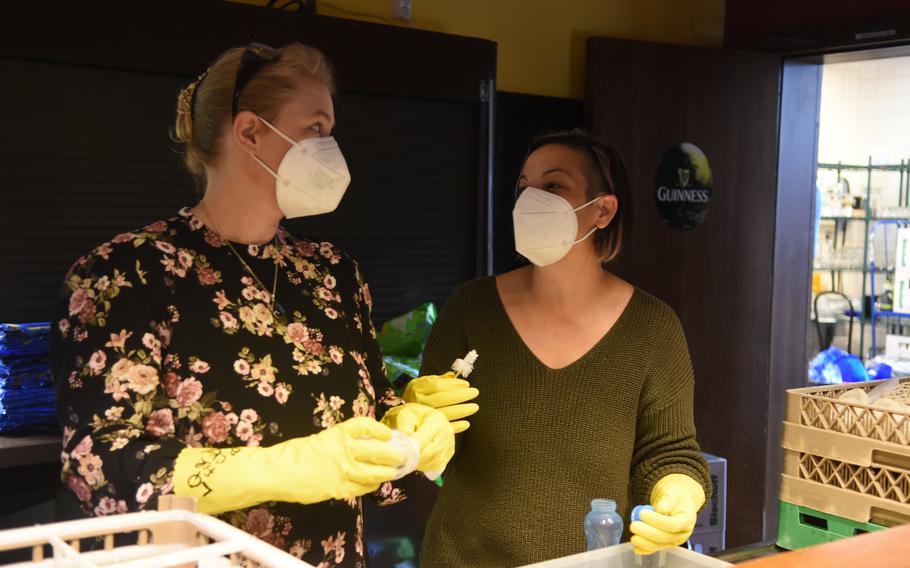 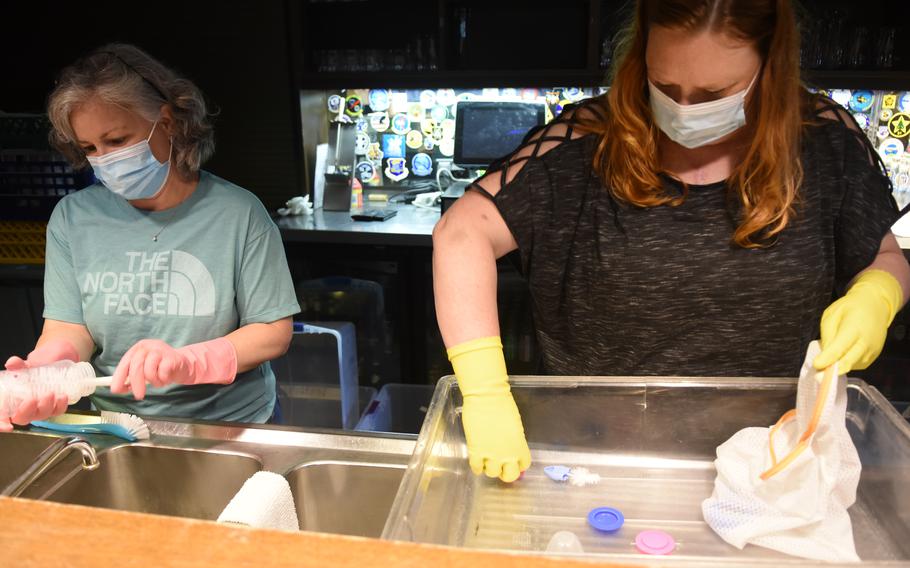 Buy Photo
Volunteers Kimberly Barney, left, and Kara O’Neil clean bottles at the officers’ club at Ramstein Air Base, Germany, on Sept. 15, 2021. Volunteers have cleaned and sanitized more than 10,000 baby bottles for Afghan evacuees at Ramstein and Rhine Ordnance Barracks in less than a month. (Jennifer H. Svan/Stars and Stripes)

“This was all thrown together so quick I don’t think anybody thought of all the logistical needs,” Quadros said.

The command at Ramstein approved the volunteer effort, and the officers’ club offered its bar, which has an industrial dishwasher and space for storing, sorting and drying.

“Bottle Buddies,” the name of the Facebook page created for volunteer signups, was launched.

It takes about an hour to clean 200 bottles, and an air compressor speeds up drying. On the busiest day, about 900 bottles are sanitized.

The job isn’t for the faint of heart, volunteers say. The odor from dirty bottles can be overwhelming.

The bottle cleaning has since shifted to the Ramstein flight kitchen. Twice a day, Gonzalez makes the rounds at Ramstein and ROB, delivering clean bottles at the crack of dawn and picking up dirty bottles in the afternoon.

At ROB, the job is handled by volunteers. Afghan women had been making their own formula, but the instructions were in German and some were not using the right measurements, Gonzalez said.

The Army provides the formula, while volunteers staff two stations to provide it for 12 hours a day. Soldiers take the overnight shifts.

Water is heated in an 8-gallon kettle for formula and tea, which Afghans typically drink throughout the day.

They’re currently making do with a few hundred tea bags a day provided through donations.

“This is such an upheaval in their lives,” said Katie Poppe, who volunteers at ROB after substitute-teaching at Landstuhl Elementary School. “I just want to help in a way I would want someone to help me in a similar situation.”