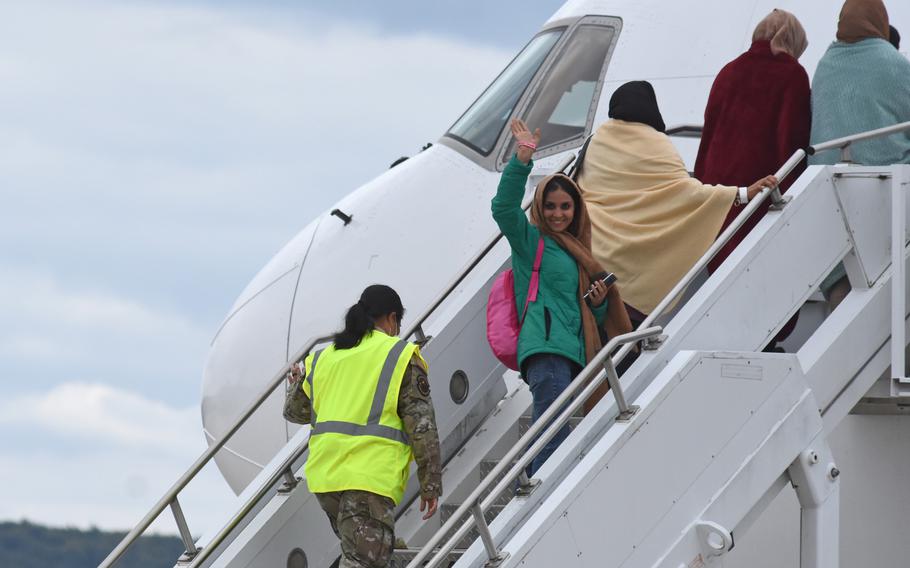 Buy Photo
An Afghan evacuee boards a commercial flight at Ramstein Air Base, Germany, on Aug. 26, 2021. Flights carrying Afghans to the U.S. are still on hold three days after it was announced that flights would be halted because of measles infections among evacuees who recently arrived in the United States. (Jennifer H. Svan/Stars and Stripes)

KAISERSLAUTERN, Germany — About 9,000 Afghans remain stuck at Ramstein Air Base with no idea when they can move on after the White House suspended flights because of measles cases among evacuees arriving in America.

Three days after the White House announced a pause in evacuation flights, U.S. officials are exploring ways to administer the measles, mumps and rubella vaccine to travelers before they depart for the United States, said Lt. Col. Will Powell, an 86th Airlift Wing spokesman.

Medical and public health workers are determining how many evacuees have proof of vaccination or carry measles antibodies, Powell said Monday.

No cases of measles have been identified among the evacuee population at Ramstein, he said.

Workers “continue to closely monitor the population while providing needed medical care for those awaiting onward travel,” Powell said in a statement.

Measles is a highly contagious viral infection that can be deadly, especially in children. The MMR vaccine has mostly eradicated measles in the United States, but in recent years there have been small pockets of outbreaks in communities with low vaccination rates. Afghanistan reported 25,000 measles cases in 2017, due largely to poor access to immunizations, according to the United Nations Children’s Fund. About 85% of those cases were in children under 10, it said.

The Centers for Disease Control and Prevention recommends that all children get two doses of the MMR vaccine, starting with the first dose at 12 to 15 months old. The second dose is suggested for ages 4 to 6, though children can receive it earlier as long as it is at least 28 days after the first dose.

Since late August, Ramstein has served as the primary transit hub for U.S. citizens, Special Immigrant Visa applicants and other vulnerable Afghans and their family members who fled Afghanistan following the Taliban’s seizure of power. More than 24,000 evacuees have departed Ramstein for the United States or another safe location since Aug. 20.

An average of 1,200 evacuees were flying out daily before flights were halted Friday. The base is not expecting any inbound evacuees for the time being, Powell said.

The German government has agreed to let evacuees stay at Ramstein and the Army’s Rhine Ordnance Barracks for a maximum of 10 days.

German health officials in Kaiserslautern could not be reached Monday about procedures for when that limit is exceeded.