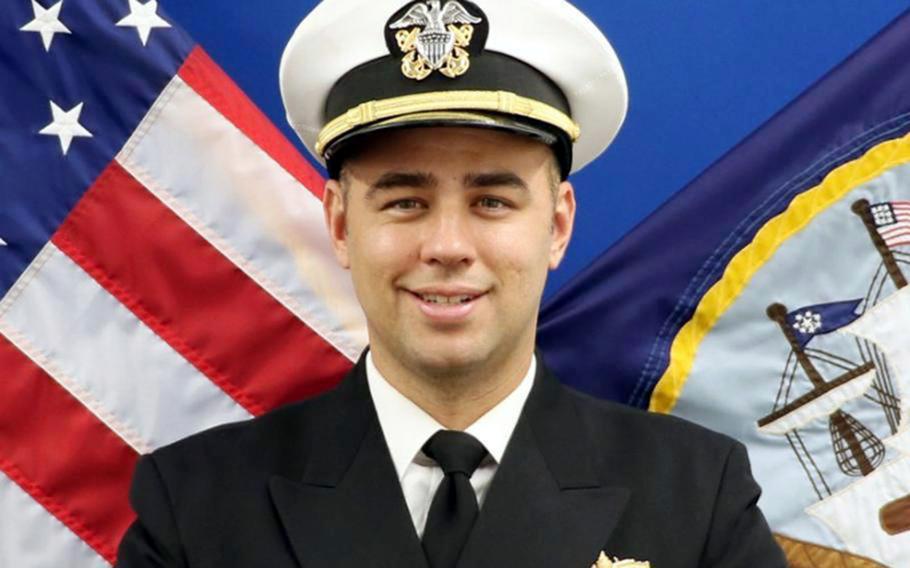 Navy Lt. Ridge Alkonis crashed his car into pedestrians and parked vehicles at a restaurant parking lot in Fujinomiya, Japan, May 29, 2021. (U.S. Navy)

(Tribune News Service) — A Dana Point, Calif., couple, whose son, Navy Lt. Ridge Alkonis, is serving prison time in Japan following a car crash, hopes a visit by the Japanese Prime Minister this week with President Joe Biden could help in getting him transferred to the United States.

Prime Minister Fumio Kishida is visiting Biden at the White House on Friday, Jan. 13, and his staff is meeting with Secretary of State Antony Blinken and Secretary of Defense Lloyd Austin III on Thursday, Jan. 12, according to State Department officials.

“We have a long relationship with our Japanese allies; that close relationship will be on full display this week,” said Ned Price, spokesman for the State Department, said during a press briefing Monday in response to reporter questions. “We are prepared to discuss this case; it’s a tragic case for all involved. We are working to find a compassionate resolution.”

Ridge Alkonis has been serving time in a Japanese prison since July after a Tokyo High Court judge denied his appeal seeking to suspend a three-year sentence he received for negligent driving following the crash that led to the death of an 85-year-old Japanese woman and her 54-year-old son-in-law. The elderly woman’s daughter was also injured.

Japanese prosecutors argued in court the May 29, 2021 crash was caused by Alkonis falling asleep at the wheel, Alkonis says he passed out driving because of acute mountain sickness after a family trip to visit Mount Fuji.

Alkonis, 34, was sentenced in October 2021; the judge said he had not traveled high enough up the mountain to be affected by altitude sickness, according to Japanese news reports.

Since his confinement, his parents Derek and Suzi Alkonis, along with is wife, Brittany, and the couple’s children, have been doing their best to publicize his case and get him released from Japanese prison on a transfer by protesting outside the White House and at Japanese consulates in Los Angeles and other areas of the county.

They have seen support from lawmakers such as Rep. Mike Levin (D-Calif.) and Sen. Mike Lee (R-Utah), who in December secured an amendment to the Omnibus Appropriations Bill that was unanimously passed that allows Ridge Alkonis to retain his pay and benefits, which were set to run out while he was in custody in Japan. Levin also supported the amendment and has been working with the Alkonis to help their efforts.

“I am working closely with colleagues, including Senator Mike Lee, to advocate for the safe transfer of Lt. Alkonis back to the United States,” Levin said on Wednesday. “I have been in regular communication with the State Department as it engages the Japanese government to initiate a formal prisoner transfer process.

“These are incredibly sensitive negotiations, and we are confident that the Biden Administration will continue to do everything in its power to bring Lt. Alkonis home,” he said.

This week, Brittany Alkonis and Ridge Alkonis’s parents said they are in Washington, D.C. to show their support for the naval officer. Brittany Alkonis was stationed in front of the State Department, the Japanese Embassy and the White House at various times on Wednesday, Jan. 11. His parents plan to be in front of the White House on Friday when Kishida is expected to meet with Biden.

“The goal is to get the attention of Prime Minister Kishida and the president that this has gone on too long and they need to bring Ridge home,” Derek Alkonis said, adding that he and his wife have not talked to their son since July. “The U.S. has made efforts to execute a prisoner transfer, but talks have stalled with Japan.”

“He works in the laundry with Japanese prisoners Monday through Friday,” he said. “He’s learning how to sew but spends a lot of time in his cell reading, writing and singing to himself. He loves music, so we send him sheet music.”

In addition to the family’s efforts in the nation’s capital, there are a series of #BringRidgeHome protests planned in other cities.