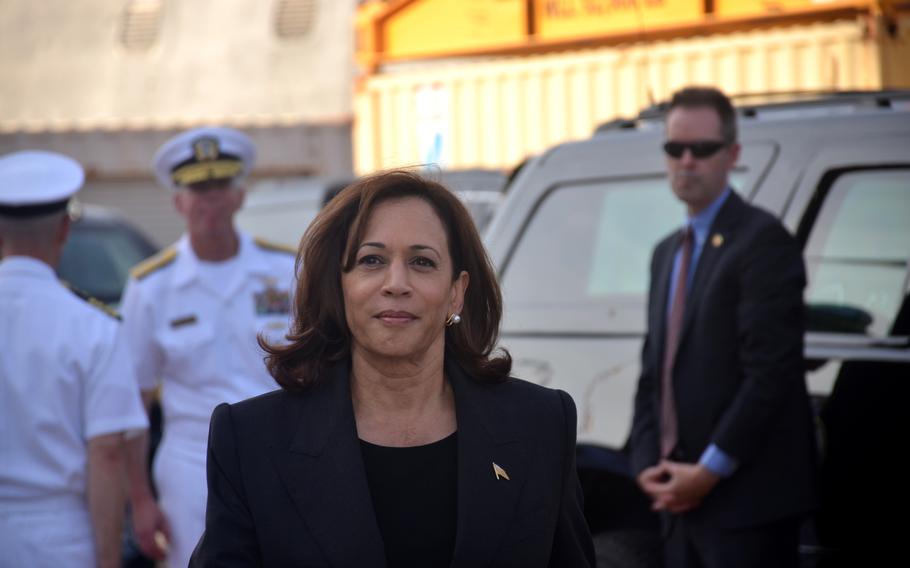 YOKOSUKA NAVAL BASE, Japan — Vice President Kamala Harris during her visit to Tokyo last month spoke with the Japanese prime minister about a U.S. naval officer serving a three-year prison term in Japan, a White House official told Stars and Stripes on Thursday.

Harris and Japanese Prime Minister Fumio Kishida “discussed the case” of Lt. Ridge Alkonis during a Sept. 26 meeting, the official said in a Thursday email. The official spoke with Stars and Stripes on condition of anonymity to disclose information about a private, diplomatic meeting.

Alkonis, 34, of Claremont, Calif., is serving three years for negligent driving causing the deaths of two people and injuring a third in Shizuoka prefecture in May 2021. He was convicted by a three-judge panel in Shizuoka District Court in October 2021, a verdict upheld on appeal by the Tokyo High Court in July.

“The case is tragic for all involved and we are working to find a compassionate resolution,” the White House official said. He did not disclose what was said during Harris’ conversation with Kishida.

Harris was in Tokyo to attend a state funeral for Shinzo Abe, the former Japanese prime minster assassinated July 8 at a campaign rally outside a train station in Nara.

Harris met this week with Alkonis’ wife, Brittany Alkonis, at the White House and sent a supportive message to the couple’s children in a video shared Friday by Alkonis supporter Andrew Eubanks on Twitter.

“I’m thinking about you guys, and I’m so proud of you,” Harris said in the video. “Your voices are so important and I’m counting on you.”

Alkonis was driving on May 29, 2021, when his car plowed into pedestrians and parked cars outside a soba restaurant in Fujinomiya, a city about two hours from Yokosuka, where Alkonis was stationed as a weapons officer aboard the destroyer USS Benfold.

Alkonis, his wife and their three children were returning that day from a hike at Mount Fuji’s fifth station.

Throughout his trial, Alkonis and his defense attorneys maintained that acute mountain sickness, a form of altitude illness, caused him to lose consciousness while at the wheel.

The district and appellate courts rejected that defense.

On Sept. 15, Stars and Stripes requested the traffic accident report, the Navy Criminal Investigative Service’s report on the incident, the Navy’s court observer report and Alkonis’ medical exam by Navy doctors after the crash.

NCIS on Sept. 30 denied the request for a copy of its report and the results of Alkonis’ medical exam, citing policies that prohibit Stars and Stripes from making Freedom of Information Act requests and NCIS from releasing personal information.

The remaining requests were still being processed by the Navy as of Friday.

Alkonis reported to the Tokyo Detention Center on July 25 to begin his sentence and was transferred to the Yokosuka Branch Prison in Kurihama on Sept. 15, Naval Forces Japan spokeswoman Cmdr. Katie Cerezo told Stars and Stripes by email Friday.

Partially the result of lobbying by Brittany Alkonis, her husband’s case has attracted the attention of members of Congress, including Rep. Mike Thompson, D-Calif., and Rep. Mike Levin, D-Calif. They and 30 others wrote President Joe Biden on Oct. 3 asking that he “use all tools available to ensure Lt. Alkonis be returned to the United States.”

Their letter repeats a series of allegations made by Alkonis’ family and supporters regarding the handling of his case, including inhumane treatment, lack of due process and violations of the status of forces agreement between the U.S. and Japan. SOFA lays out the rights and responsibilities of service members and Defense Department civilian employees, contractors and their families in the country.