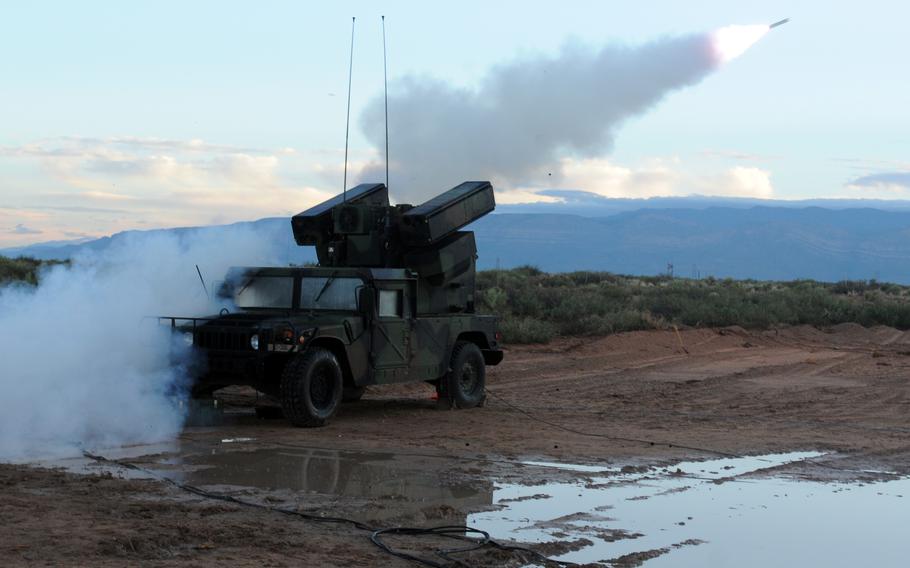 An AN/TWQ-1 Avenger with the 1st Battalion, 204th Air Defense Artillery Regiment of the Mississippi Army National Guard fires a Stinger missile at a drone during a live fire exercise at Fort Bliss, Texas, in 2015. (Scott Tynes/Mississippi National Guard)

WASHINGTON — The Defense Department on Thursday announced about $400 million in new aid for Ukraine as Russian forces continue to struggle on the battlefield and Republicans inch closer to taking control of at least one chamber of Congress.

The aid announcement for Ukraine is the second one in less than a week, but the first to include Avenger air-defense systems and Stinger missiles. It includes resupplying Ukrainian troops with thousands of artillery and ammunition rounds and more ammo for High Mobility Artillery Rocket Systems, or HIMARS.

Four are being sent to Ukraine. Singh didn’t indicate when they might be delivered but emphasized Ukraine’s military will receive them “pretty quickly.”

“The Avenger short-range, air-defense systems will also provide Ukraine with capability to protect Ukrainian troops and critical infrastructure against unmanned aerial systems and helicopters,” the department said in a statement.

“With Russia's unrelenting and brutal air attacks on Ukrainian critical infrastructure, additional air defense capabilities are critical. This is something that will fit in well with some of the capabilities that [Ukraine is] already using on the battlefield,” Singh said.

Unlike the $400 million in aid that the Pentagon announced Friday, the new aid comes from presidential drawdown authority, which allows the department to quickly ship weapons and equipment to Ukraine on an emergency basis. Last week’s aid came from the Ukraine Security Assistance Initiative, a separate funding program that allows the U.S. to contribute to Ukraine’s defense. The program has been a major part of U.S. aid since Russia began its war in Ukraine on Feb. 24.

The new aid comes as Ukrainian forces have seen continued success against Russian troops in its ongoing counteroffensive. Ukraine’s troops have driven Russian forces from several parts of eastern Ukraine.

On Wednesday and Thursday, Russian military officials claimed its troops are withdrawing from Kherson, a key city in southern Ukraine that’s been a priority for Moscow since the war began. Ukrainian and U.S. officials, however, are skeptical of those claims.

“This war could end today, or tomorrow,” Singh said when asked about Kherson and whether there are opportunities for peace. “We don’t see that happening. … We are not seeing that the Russians are willing to let up.”

“We have seen some indications of movement in Kherson city, but it’s a bit too early to make an assessment just yet.”

The new aid also comes as control of Congress is still unsettled after Tuesday’s midterm elections. Republicans, however, are inching closer to a slim majority in the Democratic-held House and still could win a razor-thin majority in the Senate.

Singh told reporters Thursday, however, the new aid announcement is not related to the elections. It is being given, she said, “to meet Ukraine’s critical security and defense needs.”

Some news reports have said a Republican-controlled Congress might be less likely to continue to support Ukraine against Russia, a concern that Singh downplayed.

“Support for Ukraine has had pretty broad bipartisan support,” she said. “I think there is, in Congress on both sides of the aisle, a commitment to Ukraine that we are in this for the long haul. So even with the midterms and the outcomes I think that Ukraine will still see security assistance and support from the United States in their fight.”