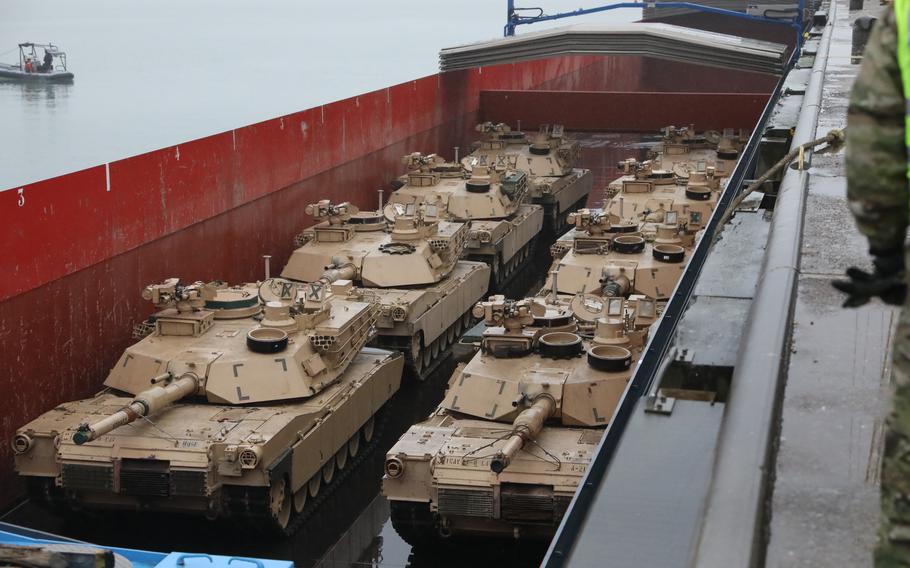 M1A2 Abrams tanks of the 2nd Armored Brigade Combat Team of the 1st Cavalry Division prepare for a movement through Europe on a barge at Vlissingen, Netherlands, on Oct. 12, 2019, in support of Operation Atlantic Resolve. (Jesse Pilgrim/U.S. Army)

Soldiers from the Army’s 1st Cavalry Division and its 3rd and 4th Infantry Divisions will deploy to Europe later this year to replace other U.S.-based units deployed to the Continent amid the monthslong Russian invasion of Ukraine, service officials announced Wednesday.

The 2nd Armored Brigade Combat Team of the 1st Cavalry Division from Fort Hood, Texas, the 4th Infantry Division Headquarters and Sustainment Brigade from Fort Carson, Colo., and the 3rd Combat Aviation Brigade of the 3rd Infantry Division from Hunter Army Airfield, Ga., will all deploy in support of Operation Atlantic Resolve, the service said in a series of statements. The new deployments expected in the coming months will maintain the Pentagon’s increased troop presence in Europe, where U.S. troops have been training with NATO partners — especially along the alliance’s eastern flank — sine Russia’s late February attack of Ukraine.

The deployments will keep American troops levels at about 100,000 — up about 20,000 American service members since Russian began amassing forces along Ukraine’s borders. It will also maintain two armored brigade combat teams of some 4,200 soldiers each on the Continent — firepower that Europe had not seen in decades before the 1st Armored Brigade Combat Team of the 3rd Infantry Division from Fort Stewart, Ga., deployed on almost no notice in early March, just days after the invasion.

The 2nd Armored Brigade of 1st Cavalry Division will replace the division’s 3rd Armored Brigade Combat Team, which deployed in the summer to replace the Fort Stewart brigade. In its announcement, the Army described the upcoming deploy as “a regular rotation of forces,” indicating the service intends to maintain two tank brigades in Europe for the foreseeable future. The 2nd Armored Brigade Combat Team of the 1st Infantry Division from Fort Riley, Kan., will be the other U.S-based tank brigade in Europe when the upcoming troop rotations happen.

The Army described the other deployments as regular troop rotations, as well.

In separate statements, leaders of each of the units set to deploy said their soldiers were properly trained and prepared to bolster NATO’s efforts to deter Russian aggression.

They deploy as the war in Ukraine has lasted more than eight months, but as Russian troops have struggled to maintain their hold on areas in the country’s south and east. Russia on Wednesday announced its troops would retreat from the southern Ukrainian port city of Kherson, which it captured in early March. It’s the latest win for Ukrainian forces, which have recaptured much of the nation’s south and west since launching a counteroffensive in September.

Maj. Gen. David Hodne, the commander of the 4th Infantry Division, said many of the deploying troops have experience operating in Europe, where the United States has maintained the Atlantic Resolve mission since 2014, when Russia illegally annexed the Crimean Peninsula from Ukraine.

“In addition to deploying expert soldiers, leaders and formations, the division’s previous experience in Europe will enable rapid partnering with allies in this dynamic security environment,” Hodne said in a statement.