‘We have a common enemy’: Mourners in Kyiv gather to honor fallen Georgian soldier 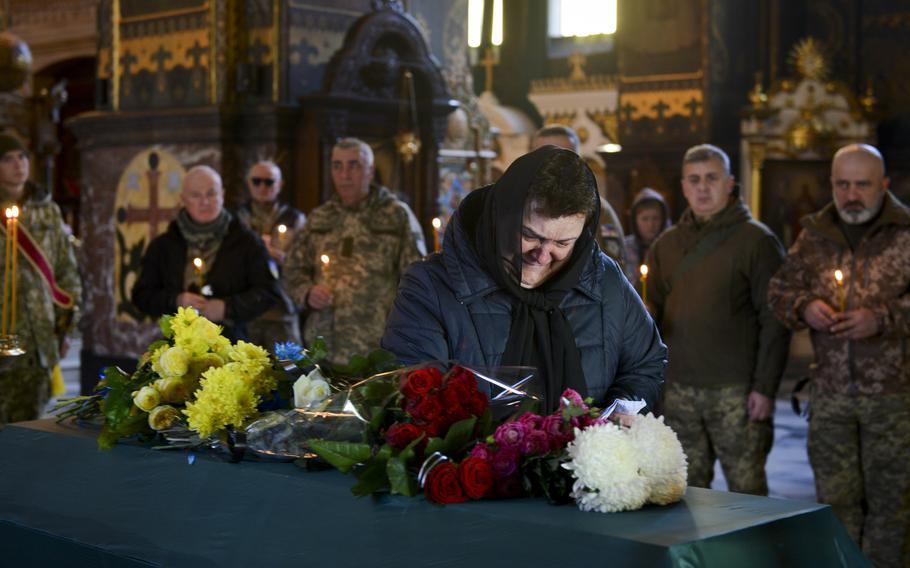 Mziia Dvali, a Georgian native living in Kyiv, Ukraine, weeps at the casket of Gurgen Gagnidze at a funeral at St. Volodymyr’s Cathedral on Nov. 1, 2022. Dvali, 66, said she felt immense grief thinking about the death of Gagnidze, a 40-year-old foreign volunteer from the country of Georgia serving in Ukraine’s 25th Airborne Brigade. (J.P. Lawrence/Stars and Stripes)

KYIV, Ukraine — Mourners gathered Tuesday to bid farewell to a soldier who died in combat. But they knew little about him.

They knew he was 40 years old. That his only surviving family was his mother and sister. And perhaps most notably, that he was Georgian.

The former Soviet republic has a population of about 4 million — slightly larger than that of Connecticut — but has contributed the largest share of foreign fighters to Ukraine’s defense since Russian launched an invasion of the country in February.

This was the 23rd funeral for a soldier from Georgia, and the gravity of the number weighed heavily on the dozens of military personnel and civilians who gathered in the nave of St. Volodymyr’s Cathedral.

“Georgia is a small country so to lose a 23rd fighter is incredibly sad for us,” said Kamba Basilia, 58, a member of the Georgian Legion, a military unit formed by ethnic Georgians. “Every person who comes here understands that any one of us can end up in this situation tomorrow.”

Gurgen “Guga” Gagnidze arrived in Ukraine four months ago and was killed in late October in an ambush near Bakhmut in the country’s east, said Nadim Khmaladze of the Ukrainian Foreign Legion. He struggled to describe what Guga was like, regretful that he did not know him better. 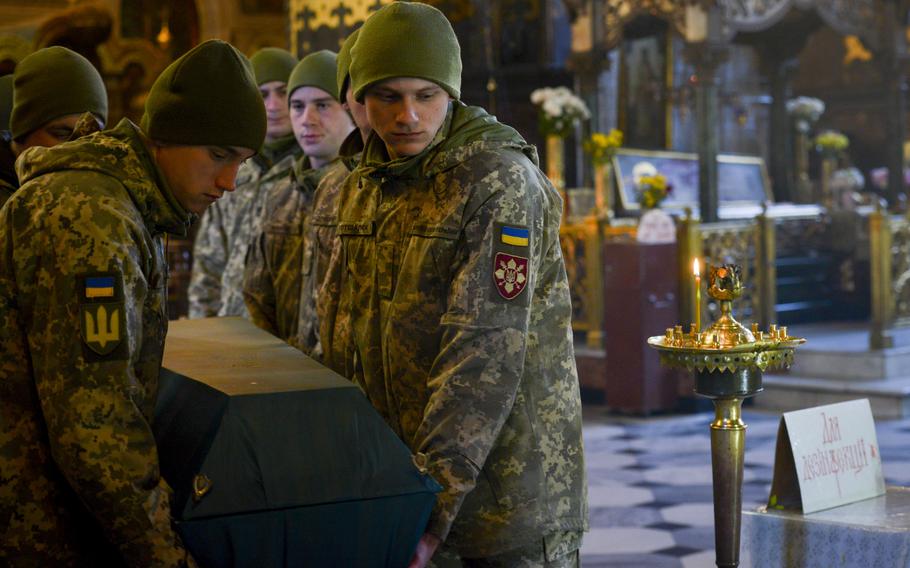 Ukrainian troops carry the casket of a Georgian soldier out of St. Volodymyr’s Cathedral in Kyiv, Ukraine, at the end of funeral services Nov. 1, 2022. The soldier, Gurgen Gagnidze, had been a foreign volunteer from the country of Georgia serving in Ukraine’s 25th Airborne Brigade. (J.P. Lawrence/Stars and Stripes)

Mziia Dvali, 66, did not know Guga at all, but she wept at his green silk-covered casket, laying her head down on it and repeatedly crossing herself. Dvali, a 45-year Kyiv resident, was born in Georgia and said she heard about the funeral on the radio.

“I have children older than him,” she said. “I wanted to say my goodbyes, to give one last tribute.”

Bohdan Vayda, a priest at St. Volodymyr's Cathedral, spoke of the enormous sacrifices of Georgian fighters.

“There is no greater love than when someone lays down his soul for his brother,” the priest said. “Glory to Ukraine and Georgia.” 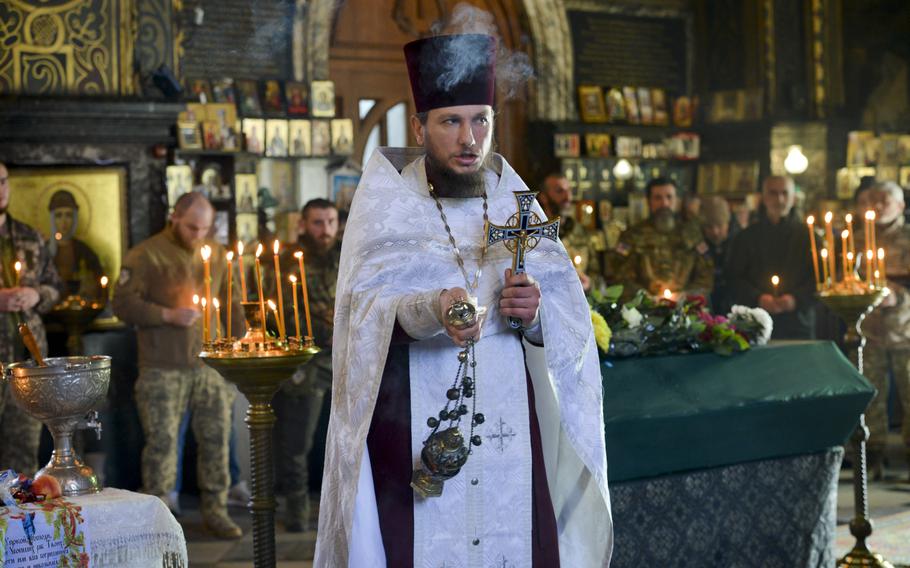 Tendrils of fragrant incense waft through the air as Father Bohdan Vayda, a priest at St. Volodymyr’s Cathedral in Kyiv, Ukraine, swings a censer to bless the soldiers and civilians gathered at a funeral Nov. 1, 2022.  (J.P. Lawrence/Stars and Stripes)

Some Georgians see the fate of their country inextricably tied to the outcome of the war, believing a Ukrainian victory is also a victory for the Georgian people, Basilia said. Russia invaded parts of Georgia in 2008 and about a fifth of the country remains under Russian control.

“We have a common enemy,” said Vano Nadiradze, 52, who came to fight for Ukraine in 2014 after Russia fomented conflict in the eastern Donbas region. “Wherever there is a Russian soldier with a gun, I will personally be there. For us, he is a blood enemy who killed our children, our women.”

Basilia said he considers his service in Ukraine a repayment of debt. In the 1990s, Basilia fought alongside hundreds of Ukrainians in the Abkhazia war against Russia-backed separatists. Many of those soldiers never came home, he said.

“The main goal is to free our land from occupants and finally free our people from Russia and live like a normal Western country,” Basilia said. “That is what Gurgen fought for, that is what we are fighting for.”

Khmaladze patrolled the line of occupation in Georgia before volunteering March 2 for Ukraine’s newly created foreign legion. He now accompanies every fallen Georgian soldier to their funeral.

Guga’s remains will travel from Kyiv to Lviv in western Ukraine and onto Warsaw before being flown to Tbilisi, Georgia’s capital, he said. 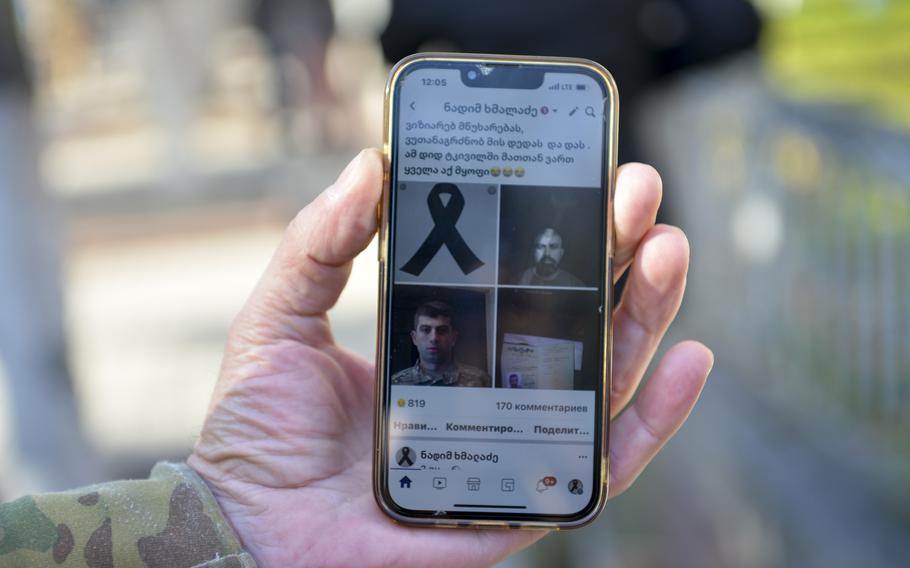 Nadim Khmaladze, a Georgian and a foreign fighter in the Ukrainian military, shows a Facebook page memorializing the death of Gurgen Gagnidze, another soldier from Georgia who had volunteered to fight in Ukraine against Russian forces. Gagnidze’s funeral drew a crowd of about 40 soldiers from both Ukraine and Georgia, as well as civilians, to St. Volodymyr’s Cathedral in Kyiv, Ukraine on Nov. 1, 2022.  (J.P. Lawrence/Stars and Stripes)

Tashchuk, 23, consoled Dvali as she stroked Guga’s casket and said he tries not to think about Ukraine’s war dead because otherwise he too would cry constantly. He said he also wants to be fighting on the battlefield for Ukraine and thought of joining the country’s Territorial Defense Forces.

But his sense of duty to the church, where he has worked for six years, has kept him in Kyiv, servicing parishioners and providing comfort to grieving families and friends.

“I know I’m needed here,” Tashchuk said. “Everyone needs to be in their place, and this is also needed, especially at this time. Still, my soul feels uneasy.” 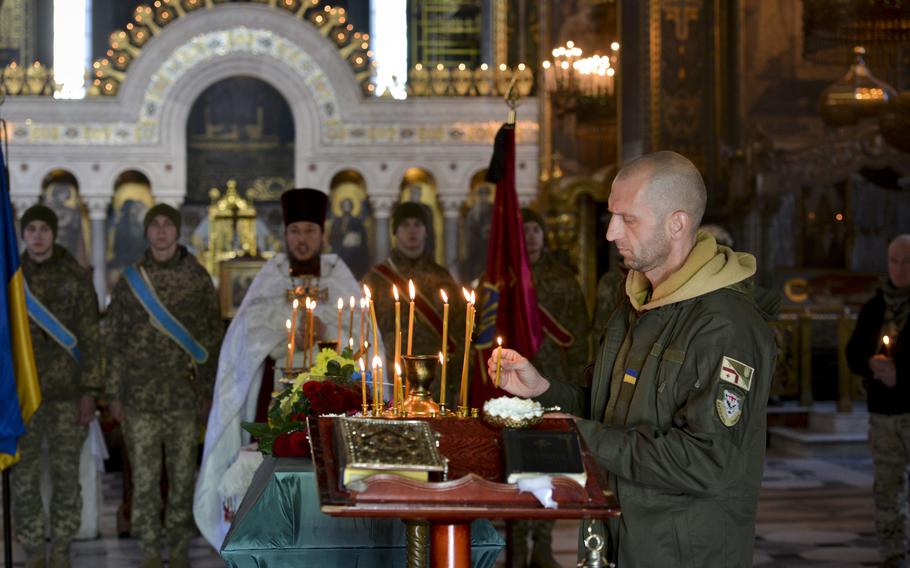 Zurab Dgebuadze, an ethnically Georgian sergeant in the Ukrainian armed forces, places a candle representing a soul into a candelabra near the casket of a fellow soldier at a funeral in Kyiv, Ukraine on Nov. 1, 2022. The soldier, Gurgen Gagnidze, had left his home in the nation of Georgia to fight in Ukraine against Russian forces.  (J.P. Lawrence/Stars and Stripes) 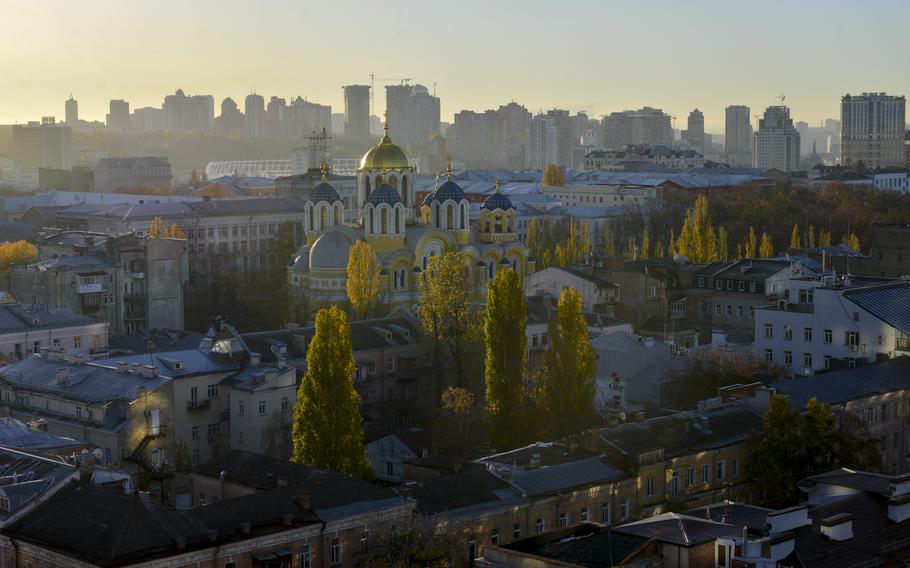 St. Volodymyr’s Cathedral serves as a center for the Ukrainian Orthodox Church in Kyiv, Ukraine. (J.P. Lawrence/Stars and Stripes) Father Bohdan Vayda, a priest at St. Volodymyr’s Cathedral in Kyiv, Ukraine, speaks at a funeral for a soldier on Nov. 1, 2022. The soldier, Gurgen Gagnidze, had left his home in the nation of Georgia to fight Russian forces in Ukraine. Gagnidze, 40, died in late October in an ambush in east Ukraine.  (J.P. Lawrence/Stars and Stripes) 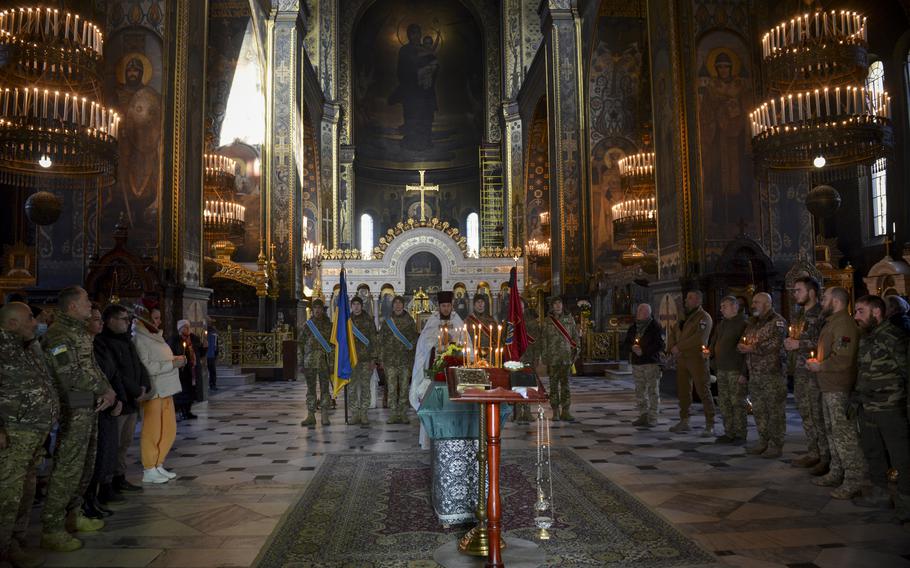 Soldiers from Ukraine and Georgia hold candles as they mourn the death of Gurgen Gagnidze, a Georgian soldier, at a funeral in Kyiv, Ukraine, on Nov. 1, 2022. Gagnidze died fighting Russian forces in east Ukraine in late October. He was a foreign volunteer from the country of Georgia serving in Ukraine’s 25th Airborne Brigade. (J.P. Lawrence/Stars and Stripes)