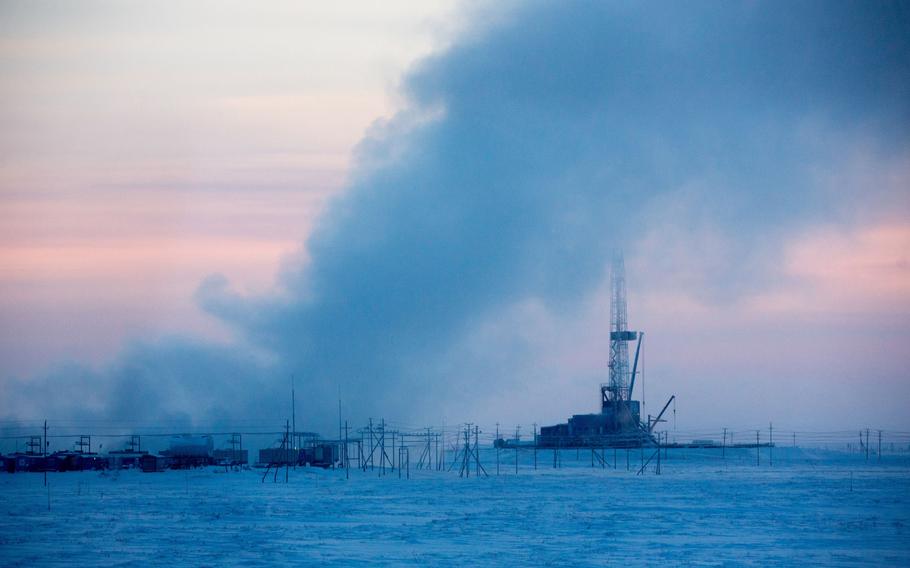 An oil derrick stands near the Russkoye heavy crude oil field, operated by Rosneft in the Yamalo-Nenets region of East Siberia, near Novy Urengoy, in Russia, on Dec. 8, 2016. (Andrey Rudakov/Bloomberg)

Moscow has mostly failed to line up the fresh markets for its crude that it needs to secure by the time European Union sanctions on its seaborne exports come into effect on Dec. 5.

Beyond the three countries that stepped in initially — China, India and Turkey — other buyers haven't materialized to any meaningful extent.

About 740,000 barrels a day of that total was shipped to European countries, a market that will mostly disappear by the end of November. A month later Russia will also lose outlets for an additional 650,000 barrels a day piped to Poland and Germany through the Druzhba system. So Moscow needs to find new markets for almost 1.4 million barrels a day of crude. That won't be easy.

Placing those extra volumes with existing buyers would require them to increase their purchases of Russian barrels by two-thirds and to cut imports from elsewhere, and that's assuming sufficient ships can be found to carry the crude over the much longer distances involved.

Sales to Sri Lanka have become mired in the island nation's economic woes. One cargo of ESPO crude has been anchored off the capital, Colombo, since Sept. 20, and a second one heading there diverted to China partway through its voyage.

That makes the task of monitoring Russia's exports more complicated, but most of those vessels end up in India, with a smaller number heading further east to China. Adding those ships into the calculation would leave the combined flow of Russian crude to Turkey, China and India little changed.

Meanwhile, trading houses and refiners are filling storage tanks in Rotterdam before the E.U. sanctions take effect. The North Sea terminal was the only destination for Russian crude in Northern Europe in the four weeks to Oct. 28.

Time is running out to deliver crude from distant ports to China and India before the E.U. ban hits. The shortest voyages to India, from Russia's Black Sea port of Novorossiysk, take about two and a half weeks. The voyage time rises to three and a half weeks for shipments to India from the Pacific port of Kozmino and to more than a month from export terminals in the Baltic or on Russia's Arctic coast.

Tankers loading now at Primorsk or Ust-Luga are unlikely to reach discharge terminals in China, or even those such as Paradip and Visakhapatnam on the east coast of India, before that deadline. Shipments to ports on India's west coast can probably continue up to about Nov. 7 until they also risk insurance cover ending while they are still on the water. A cargo of crude from the Arctic port of Murmansk is heading to China via the Northern Sea Route along Russia's Arctic coast, a journey that should take about three weeks.

Shipments from Russia's Pacific ports take only a few days to reach Chinese import terminals, and the voyage from the Black Sea to Turkey is similarly short. In contrast, shipments to India take several weeks, putting them at greater risk of falling foul of sanctions before they arrive.

Overall exports edged lower on a four-week average basis, slipping for a second week but remaining just above 3 million barrels a day. The biggest drop was in flows to Turkey.

All figures exclude cargoes identified as Kazakhstan's KEBCO grade. These are shipments made by KazTransoil JSC that transit Russia for export through Ust-Luga and Novorossiysk.

The Kazakh barrels are blended with crude of Russian origin to create a uniform export grade. Since the invasion of Ukraine by Russia, Kazakhstan has rebranded its cargoes to distinguish them from those shipped by Russian companies. Transit crude is specifically exempted from E.U. sanctions on Russia's seaborne shipments that are due to come into effect in December.

Russia's seaborne crude exports to European countries slipped, falling to 740,000 barrels a day in the four weeks to Oct. 28. Flows were down by 42,000 barrels a day, or 5%, from the period to Oct. 21. These figures do not include shipments to Turkey.

The volume shipped from Russia to Northern European countries fell back in the four weeks to Oct. 28. All shipments went to storage tanks in Rotterdam for a third week, as traders seek to boost stock levels ahead of the Dec. 5 sanctions.

Exports to Mediterranean countries slipped again in the four weeks to Oct. 28. Flows to the region, including Turkey, which is excluded from the European figures at the top of this section, fell to a three-week low. Shipments to Italy edged higher, but the volume heading to Turkey fell.

Combined flows to Bulgaria and Romania fell to a five-week low of 167,000 barrels a day, little more than half of the peak volume seen in June. Almost all of the volume heading to customers in the Black Sea ends up in Bulgaria. The country secured a partial exemption from the E.U. ban on seaborne crude imports from Russia.

Shipments to Russia's Asian customers, plus those on vessels showing no final destination, which typically end up in either India or China, recovered most of the previous week's loss. The volume of crude heading to Asia averaged 1.8 million barrels a day over the four weeks to Oct. 28, with a further 135,000 barrels a day on tankers whose point of discharge is unclear.

All of the tankers carrying crude to unidentified Asian destinations are signaling Port Said or the Suez Canal, with final discharge points unlikely to be apparent until they have passed through the waterway into the Red Sea, at the earliest. Most of those ships end up in India, with some heading to China and the occasional vessel going to other destinations such as Fujairah in the United Arab Emirates, or Colombo in Sri Lanka.

Aggregate flows of Russian crude rose by 277,000 barrels a day, or 10%, in the seven days to Oct. 28, compared with the previous week. Shipments were up from the Baltic and Black Sea but lower from both the Pacific and Arctic terminals. Figures exclude volumes from Ust-Luga and Novorossiysk identified as Kazakhstan's KEBCO grade.

Inflows to the Kremlin's war chest from its crude-export duty rose by $12 million to $133 million in the seven days to Oct. 28. But the four-week average income dropped, losing $9 million to $128 million. The four-week measure is the lowest since Moscow ordered its troops into Ukraine in February.

At $6.06 a barrel, the export duty rate in October is the lowest per-barrel rate since February 2021, according to Bloomberg calculations using figures published by the Russian Ministry of Finance.

Duty rates will fall again in November, dropping to $5.83 a barrel, taking them to their lowest level since January 2021. The Urals discount to Brent widened during the latest calculation period, which ran from Sept. 15 to Oct. 14, compared with the previous one, to stand at about $25.50 a barrel.

A total of 30 tankers loaded 21.9 million barrels of Russian crude in the week to Oct. 28, vessel-tracking data and port agent reports show. That's up by 1.9 million barrels, reversing almost all of the previous week's drop. Destinations are based on where vessels signal they are heading at the time of writing, and some will almost certainly change as voyages progress. All figures exclude cargoes identified as Kazakhstan's KEBCO grade.

The total volume on ships loading Russian crude from Baltic terminals rose for the first time in four weeks.

Shipments from Novorossiysk in the Black Sea jumped to a four-week high after the previous week's slump.

Arctic shipments slumped to a seven-week low. Two tankers left Murmansk in the week to Oct. 28, with one of them — the Vasily Dinkov, which usually operates as a shuttle tanker between the Varandey terminal and Murmansk — heading to Rizhao in China via the Northern Sea Route along the Arctic coast of Russia.

Shipments from the Pacific fell to a three-week low. Two of the eight cargoes of ESPO crude that were loaded are heading to India, with the rest going to China. The vessel that loaded a cargo of Sokol the previous week has now left the terminal and is showing a destination of Yeosu in South Korea, though that may not be where the crude ends up, as it was previously a common location for ship-to-ship transfers of the grade.