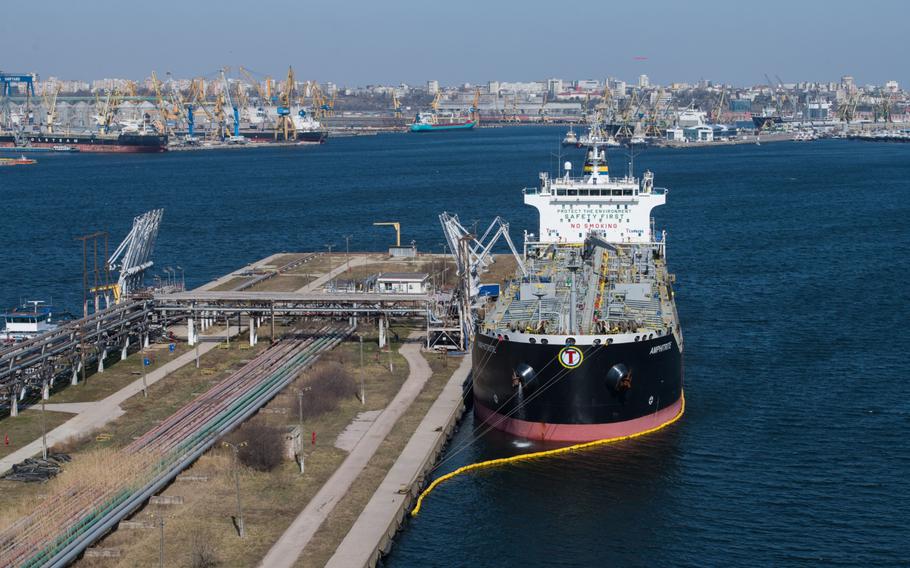 A tanker moored in a gas and oil dock at the Port of Constanta in Constanta, Romania, on Tuesday, March 22, 2022. (Nathan Laine/Bloomberg)

A ship carrying Russian Sokol crude sailed from the country's Sakhalin-I project in the Far East, marking the first export from the former Exxon Mobil Corp.-operated project in five months.

Aframax tanker Vladimir Arsenyev departed Russia's De-Kastri terminal on Oct. 30 and is signaling South Korea as its destination, according to ship-tracking data compiled by Bloomberg. The vessel is expected to arrive at Yeosu on Nov. 3, where the cargo could be discharged onto another tanker through a so-called ship-to-ship transfer, or delivered to the port.

The vessel is owned by Russia's Sovcomflot PJSC. Aframax tankers typically have an oil-carrying capacity of 650,000 to 750,000 barrels.

Exxon completed its exit from Russia this month after Moscow "unilaterally terminated" the company's interests in Sakhalin-1 and transferred the project to a Russian operator. The U.S. corporation had been winding down production since May after announcing its intention to leave following the invasion of Ukraine.

It's unclear if the Sokol cargo has been sold, or who could be the potential buyer of the oil, said traders who monitor the Russian crude market. State-owned Rosneft recently offered Sokol cargoes in a closed tender last week, they added. Sakhalin-1 produced about 227,000 barrels a day last year.

Russian exports from the Far East — namely Sokol and other grades such as ESPO and Sakhalin Blend — are popular with North Asian buyers due to their proximity and high diesel yields. Most ESPO shipped from Kozmino port typically go to Chinese buyers, although interest from India has emerged in recent months after the OPEC+ producer discounted supplies.