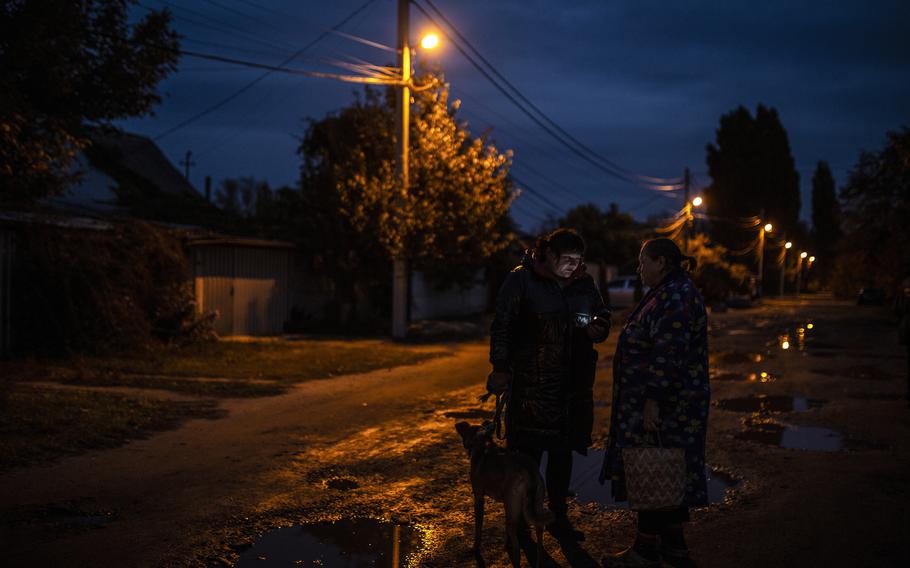 Alyona Harbuz, left, walks her dog before the streetlights go out as she stops to speak to a neighbor, Valentina Fyederova, in Dnipro, Ukraine. (Heidi Levine/for The Washington Post)

DNIPRO, Ukraine — A powerless 15-floor apartment building in this industrial city offered a preview of what many Ukrainians fear will soon become the norm here after relentless Russian airstrikes on civilian infrastructure: Candles flickered in windows. Couples cooked by flashlight. Outside in the darkened courtyard on Saturday evening, three men and a woman drank alcohol in a cone of cellphone light.

Some residents had caught wind of the planned outage on social media. Others had no clue until it happened just as dark fell.

With the elevator useless, Tetiana walked up five floors in the dark with her dachshund to a drab apartment with no candles or flashlights. Before walking the dog, she had spent the last two hours texting with relatives across the country, some of whom were also without power. "This is the first time this has happened," said Tetiana, a middle-aged woman who declined to give her last name. "I'm in shock."

Tetiana's neighborhood wasn't the only one affected. In a leafy suburb on the other side of the city, Oleksandra Bondor had just washed her hair when the electricity cut out for the second time in two days. She tried to dry it by blasting her car's heating on Sunday, as she scrambled to get ready for a celebration of her son's third birthday.

A few weeks ago, a Russian missile or drone was shot down over their house in the middle of the night, Bondor said, causing a nearby field to catch fire and leaving wreckage in their yard where her son, Roman, plays.

Power outages — some scheduled as part of power rationing, others unexpected and unavoidable — have grown more frequent and widespread in Dnipro, a regional capital in central Ukraine, since Russia began sustained attacks on the country's electrical infrastructure two weeks ago. (Targeting civilian infrastructure with no military purpose is a war crime.)

Russia's bombing campaign, which left 1.5 million people across Ukraine without power on Saturday, has evoked scenes of European cities plunged into darkness during World War II. But in the 21st century, the tactic has upended remote work, interrupted distance schooling for children, and risks leaving drained cellphones on which so many now rely to check on loved ones or learn of incoming rocket fire. The lights were mostly out at a multistory apartment building in Dnipro, Ukraine, on Saturday, as scheduled power outages took hold across the city. Dnipro is one of the hardest hit cities by Russia’s campaign of airstrikes on civilian infrastructure. (Heidi Levine/for The Washington Post) But the biggest fear in Ukraine, a country with bitterly cold winters, is the loss of heat.

A few miles from the high rise off Donetske Avenue, Natasha Nishchedim, 63, was pushing her 18-month-old granddaughter, Maira, in a pram before planned cuts to the streetlights left her neighborhood in the dark.

"Everyone is worried because winter is coming," Nishchedim said of the outages. She said she regretted giving up decades ago a wood-fired stove, which even today remain common in the countryside. Her family had saved food, especially for the baby, but could do little about the dropping temperatures.

"The most important thing is heating," she said. "We need it to live."

In Dnipro, roughly 70 miles from the front line, the outages so far are more an inconvenience than an acute emergency. Daily life remains largely uninterrupted. Electric trams continue to rattle around town. Shops and restaurants remain open and well lit. In Homie, a hip late-night cafe, there were candles atop tables in the evening — but only to enhance the mood.

But residents are already facing sporadic power cuts with tougher measures likely in the weeks to come.

Russia has repeatedly targeted Dnipro's electrical infrastructure in recent weeks, last damaging its grid on Oct. 18, according to regional officials.

A few days ago, the utility company, DTEK, circulated a list of scheduled neighborhood power outages that could begin this week. Over the weekend, streetlights began blinking out at 8 p.m., and the city's bridges over the Dnieper River now go dark at midnight.

Some residents were baffled by the blackouts, which didn't seem to follow the utility company's schedule. 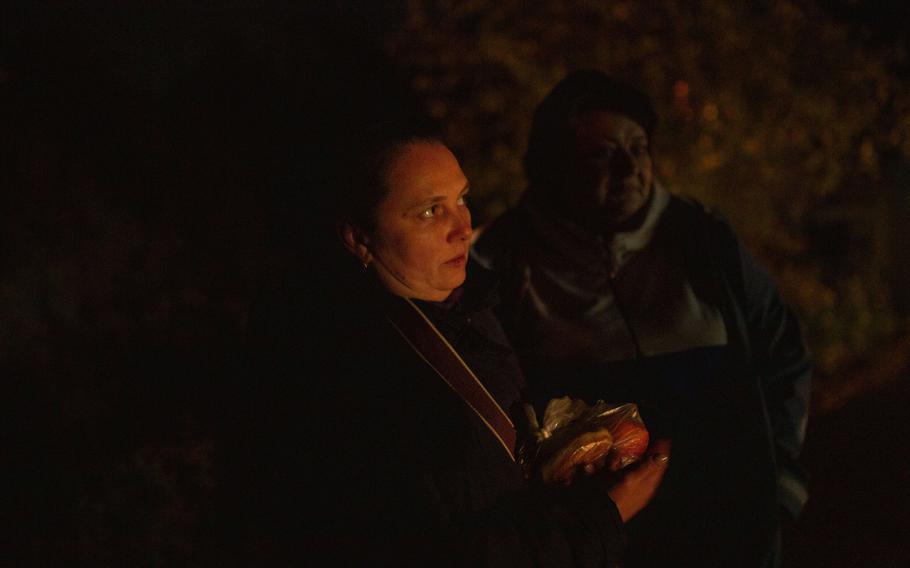 Tatyana Kovalenka, left, holds homemade pastries she received from a relative. She is joined by Olya Prytula as they walk in the dark back to their homes in Dnipro on Saturday. (Heidi Levine/for The Washington Post) Relatives arrive to visit the Tradchuk family during a power outage in Dnipro on Saturday, forcing them to unload their vehicle in the dark. After repeated Russian airstrikes on civilian infrastructure, the Ukrainian government has asked citizens to reduce electricity use. (Heidi Levine/for The Washington Post)

Tatyana Kovalenka complained that over the past two weeks, the power often went out for three to four hours during the day, wiping out the accountant's work and shutting down her children's schooling.

"We understand it's for our economy, to maintain the energy system, but it's hard," Kovalenka, 47, said.

DTEK could not be reached for comment on the outages.

Bondor, who had struggled to dry her hair in her car, feared the outages would spoil the small bit of normalcy she hoped to give Roman on his third birthday.

Her family had fled to western Ukraine for three months earlier in the war and then returned, hoping things were safer. But on Sunday they were boiling water on a camping stove and worrying what to do if the outages continue into the fast-approaching winter.

On Sunday, at least, there was a reprieve. Just as they were preparing to throw Roman's birthday party by candlelight, the power came back on.