Ukrainian food shipments to keep moving in pushback to Putin 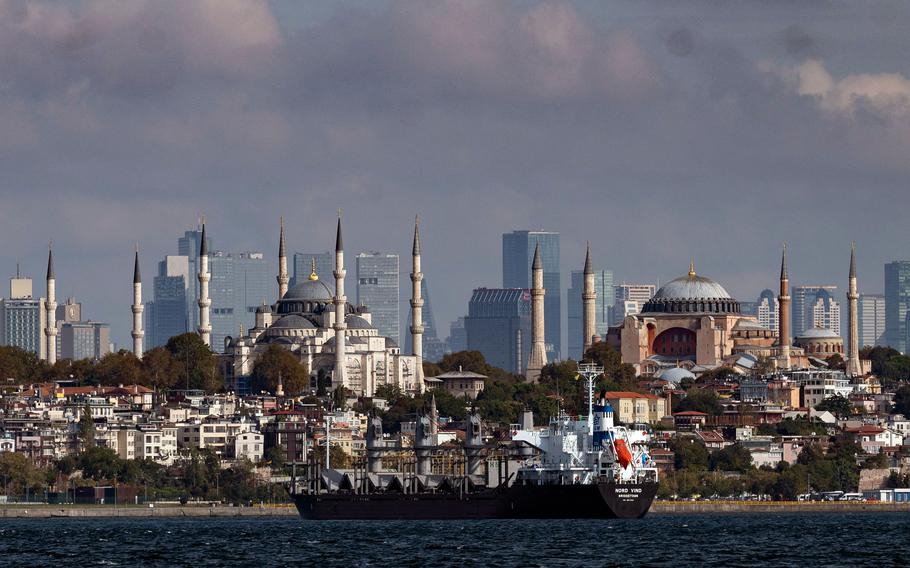 The Barbados-flagged ship "Nord Vind" coming from Ukraine loaded with the grain is anchored for inspection in Istanbul on Oct. 11, 2022. (Yasin Akgul/AFP via Getty Images)

(Tribune News Service) — Ukraine, Turkey and the United Nations agreed to have vessels carrying food from Ukrainian ports sail on Monday, pushing back against Russia after its withdrawal from a deal to allow safe passage of Ukraine’s grain exports.

The announcement followed a round of talks that included Russian delegates, who were informed that ship movements would resume after a pause on Sunday, the U.N. said in a statement.

Turkey and the U.N., which worked for months to broker the safe-transit deal for grain shipments from three Ukrainian ports, took the lead in seeking to save the initiative after Russia said it would pull out indefinitely following an attack on its Black Sea fleet.

“The Ukrainian, Turkish and United Nations delegations agreed on a movement plan” for 16 vessels — 12 outbound and four inbound — to use the “maritime humanitarian corridor” on Oct. 31, according to the statement.

Ukraine and its allies condemned Russia’s decision, saying it would worsen global food insecurity. President Joe Biden denounced the Russian move as “purely outrageous” and said it would “increase starvation.” The European Union and U.K. also condemned it.

Russia’s delegation told the meeting of the initiative’s Joint Coordination Center on Sunday that while it’s suspending participation in the grain-export deal, including in cargo inspections, “for an indefinite time,” it will continue a dialog with Turkey and the U.N. “on pressing issues.”

“The Russian Federation delegation also expressed its readiness to cooperate remotely on issues that require immediate decision by the JCC,” according to the statement.

Turkey said earlier Sunday that Defense Minister Hulusi Akar was speaking with counterparts, reminding them that the export deal is “for the good of the entire humanity and that crises can be solved through goodwill and dialogue.”

U.N. Secretary General Antonio Guterres postponed his departure for an Arab League summit in Algeria by a day to focus on the grain initiative. Among others, he conferred Sunday with EU foreign policy chief Josep Borrell.

Russian Deputy Foreign Minister Andrei Rudenko didn’t explicitly rule out a return to the grain deal when questioned by journalists in Moscow on Sunday, while saying the next steps depended on an investigation into the drone attack on its navy on Saturday. It wasn’t clear who would conduct such a probe.

Russia said Ukraine launched the attack from the Odesa region, the center of the grain export initiative, and potentially used at least one civilian grain vessel. Ukraine denied the claims.

Senior Russian officials have spent weeks criticizing the export deal ahead of a Nov. 19 renewal deadline. Ukraine in turn has accused Moscow of delaying progress through the safe-passage corridor between Odesa and Turkey to create a growing backlog of ships.

The pileup totaled more than 100 ships on Sunday — 97 loaded vessels and 15 inbound, according to the U.N. Another 89 vessels have applied to join the initiative.

Ukraine is one of the world’s biggest wheat, corn and vegetable oil providers, and the bulk of its exports go by sea.