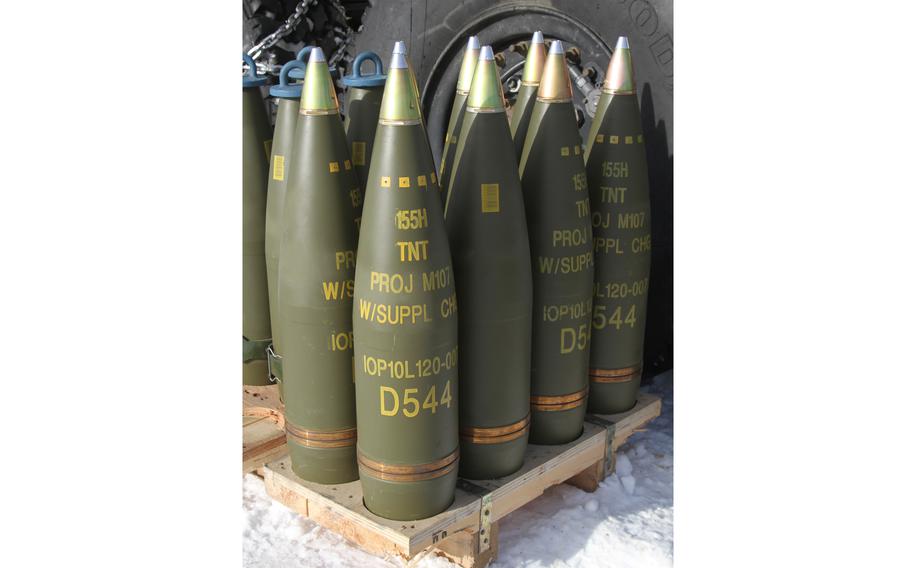 The Pentagon announced Friday, Oct. 28, 2022, that it will send some $275 million in new weapons and equipment to Ukraine, including 155mm artillery rounds as pictured. (Corey Confer/U.S. Army)

The Pentagon will send some $275 million in new weapons and equipment to Ukraine marking the 24th time that the United States has sent military aid from its own inventory to support the country’s efforts to repel Russia’s invasion.

The latest shipment — expected to arrive in Ukraine in the coming weeks — will primarily include ammunition, including rocket and precision-guided artillery rounds, Pentagon spokeswoman Sabrina Singh said Friday. The Pentagon has now provided some $18.5 billion of its own weapons to Ukraine under President Joe Biden’s authority to transfer U.S. supplies to aid the Ukrainian war effort, she said.

The shipment comes as Russia has poured thousands of conscripts with little fighting experience onto battlefields in Ukraine to bolster front-line efforts in the country’s east and south regions after a series of setbacks in recent weeks. Pentagon officials have said weapons packages are typically tailored to the Ukrainian’s current needs.

The Pentagon has lauded Ukraine’s use of HIMARS on the battlefield, telling reporters that the weapons were critical in rolling back Russian forces in the country’s east and south in recent months. The Pentagon has provided 20 of the rocket systems, which can strike targets up to 50 miles away. Ukraine has used HIMARS to strike Russian command and control and logistics nodes deep behind its front lines.

But Ukraine has also repeatedly asked the United States and other NATO nations for longer-range artillery weapons. The Pentagon has denied those requests to date. Defense Secretary Lloyd Austin on Thursday dismissed Ukraine’s need for longer-range rockets. He told reporters at the Pentagon the HIMARS ammunition that Ukraine has been using could reach any target it needed to strike in the country, including on the Crimean Peninsula, which Russia illegally annexed in 2014, and Ukraine has pledged to take back.

Austin said what the Ukrainians really needs is an advanced air defense capability, which the United States has been working to provide them. Austin said he expected to provide short-range air defense systems known as NASAMS, or National Advanced Surface-to-Air Missile Systems, to Ukraine by “early next month.”

NASAMS are developed by U.S.-based Raytheon Technologies and Norway’s Kongsberg Defence and Aerospace, and can strike down incoming ballistic missiles, fighter jets and drones, according to the manufacturers.

That capability will be critical for Ukraine, which has seen Russian missiles increasingly target its critical infrastructure in recent weeks as Russian forces continue to retreat. The Associated Press reported Friday that rolling blackouts had continued across the country, which has seen more than 30% of its power stations destroyed in Russian missile and artillery attacks.

Singh said Friday that a training problem was already in place for Ukrainian troops to learn to operate the NASAMS.

“Once it has been completed, the system will be ready for delivery to Ukraine, and we anticipate that that training program will conclude soon,” she said.