Residents of Kyiv, Ukraine, line up to fill water jugs from a public fountain in Taras Shevchenko Park after a Russian missile strike Oct. 31, 2022, left about 80% of the city without water. (J.P. Lawrence/Stars and Stripes)

KYIV, Ukraine — Valentina wiped tears from her eyes as she surveyed the stream of city residents pumping water at Shevchenko Park.

Some came with water bottles, others carried large jugs or buckets and a group of men even ambled in with a wheelbarrow.

Russian missile strikes knocked out the water supply to most of the city Monday, and Valentina looked at the scene at the park’s drinking fountains with despair.

“It’s just hurtful,” Valentina said, declining to give her last name. “I’m just so sad for the people of Ukraine. What bad have we done to deserve all this death and sorrow? How can you not cry?” Valentina, a 50-year-old resident of Kyiv, Ukraine, cries while thinking of the Russian invasion of her country in early 2022. Valentina, who declined to provide her last name, came to Taras Shevchenko Park to gather water after a Russian missile attack struck critical energy and water facilities on Oct. 31, 2022. (J.P. Lawrence/Stars and Stripes)

Valentina, 50, spent three hours in a bomb shelter waiting for the air raid alarm to clear. She lives an hour away from Shevchenko Park, which was hit by a Russian missile less than a month ago, and she said her apartment lost water and electricity.

Her blue eyes welled up as she spoke of men at the front lines and the increasing hardships of living in Kyiv.

She said she feared what the looming winter will bring as Russia takes aim at civilian infrastructure and seeks to plunge Ukraine into cold and darkness. The attacks Monday morning left 80% of Kyiv without water, according to the city’s mayor, Vitali Klitschko. 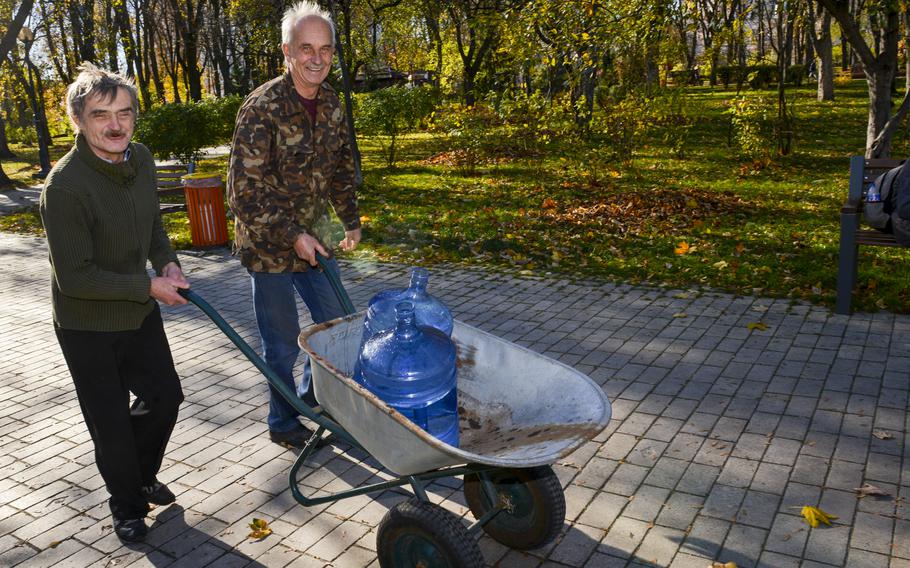 Nikolai Token, right, and his compatriot push a wheelbarrow filled with two water jugs through Taras Shevchenko Park in Kyiv, Ukraine, on Oct. 31, 2022. Token and his friend said they regularly stock up on water from the park due to water outages. (J.P. Lawrence/Stars and Stripes)

Laila Ivanova, 80, said this was the first time she gathered water for her apartment in the 52 years that she’s lived there. She brought two plastic jugs with her, confident they will last her a long time.

“We expect some kind of disturbance every day,” Ivanova said. “But we’re trying to stay in a positive state of mind.”

She is also optimistic about her ability to survive winter without the comforts of modern living.

“I have two fur coats and a sunny apartment,” Ivanova said. “When you’re 80, you’re not scared of anything.”

Olha Litvinskaya, 19, took the outages Monday in similar stride. Her apartment lost water three or four times in the past month, she said, and she already has a full jug at home in case of an emergency. 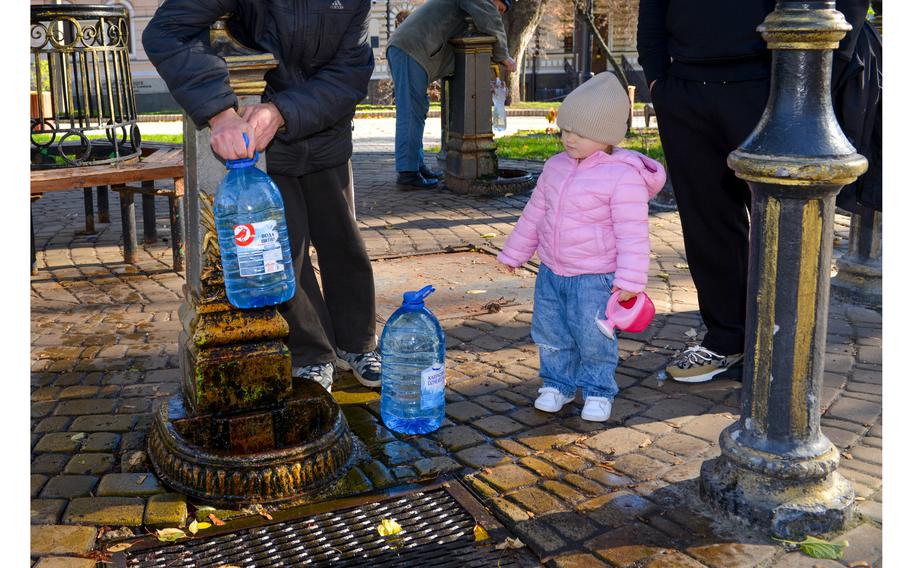 Liza, who is from Kyiv, Ukraine, waits to refill her toy watering can at a public fountain in Taras Shevchenko Park on Oct. 31, 2022. At least 50 residents came to the park to get water, with some saying they were regulars at the pump and some saying they came due to a Russian missile attack that morning left many homes and offices without water. (J.P. Lawrence/Stars and Stripes)

She said she was not scared to face more utility outages in the coming months as long as her pet turtle, Soap Bubble, had enough heat. Litvinskaya, a university student, adopted Soap Bubble from a couple from Mariupol, who kept the turtle warm with candles as they made their escape from the besieged city.

“I took her to the vet several times, she’s healthy now and she got her vaccinations,” Litvinskaya said. “I love her so much. So as long as she has heat, we’ll be all right.”

Valentina, despite her fears, said she too will manage. She’s stocked up on candles and she said she and her husband will bundle up when it gets cold and travel to public wells and drinking fountains when they lose water.

“We will survive,” she said. “What else are you going to do? You’ve got to live somehow.”