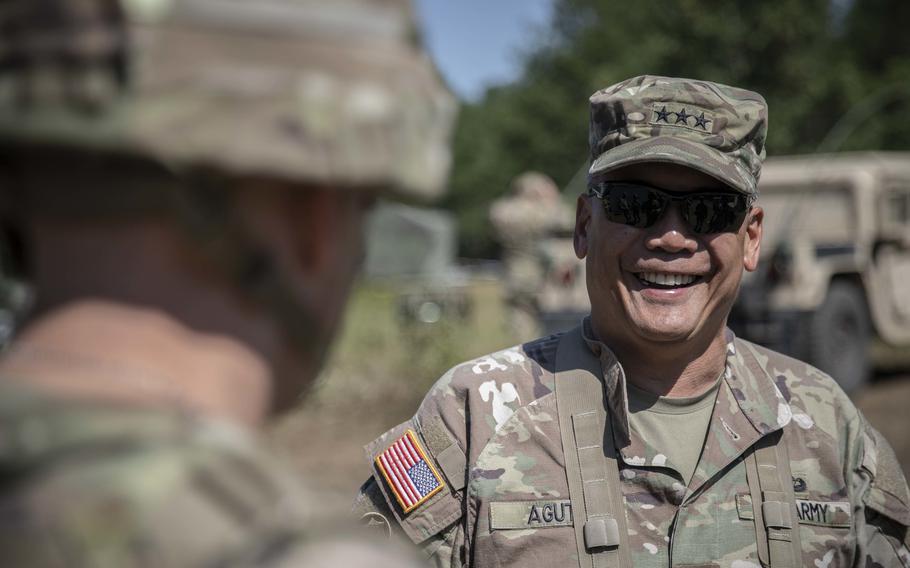 Army Lt. Gen. Antonio Aguto Jr., head of the First U.S. Army headquarters at Rock Island Arsenal in Illinois, visits the 77th Sustainment Brigade, during an exercise at Fort McCoy, Wis., on Aug. 10, 2022. Aguto is regarded as a top candidate to lead a new Army headquarters in Germany that will coordinate security assistance for Ukraine. (Alex J. Elliot/U.S. Army)

STUTTGART, Germany — A three-star general will lead a new Army headquarters in Germany that will include about 300 U.S. service members responsible for coordinating security assistance for Ukraine, a senior U.S. military official said this week.

Formation of the Security Assistance Group Ukraine, or SAGU, which will be based out of U.S. Army Europe and Africa headquarters in Wiesbaden, was announced Friday.

Now, a lieutenant general will need to be nominated and confirmed as the new headquarters takes shape, the official said Monday. The aim is to have the unit running by early 2023.

On Sunday, The New York Times reported that Lt. Gen. Antonio Aguto Jr., head of the First U.S. Army headquarters at Rock Island Arsenal in Illinois, was regarded as a leading candidate for the new job.

The assistance group is intended to continue the work of the Army’s 18th Airborne Corps, which recently redeployed to North Carolina after arriving in Germany and Poland at the time of Russia’s late-February invasion of Ukraine. 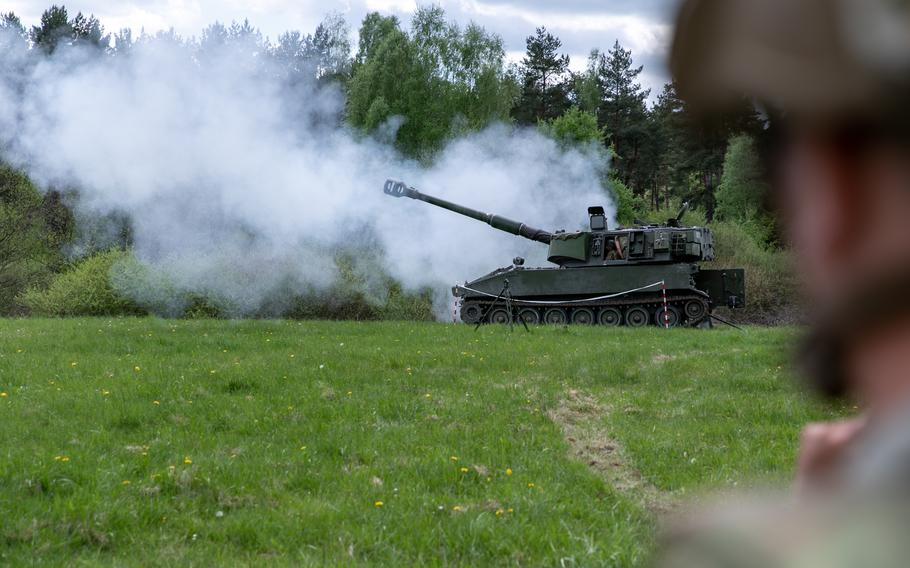 A U.S. soldier watches Ukrainian artillerymen fire the M109 self-propelled howitzer at Grafenwoehr Training Area, Germany, on May 12, 2022. The exercise was part of security assistance packages provided to the Ukrainians by the U.S. and Norwegian militaries. (Spencer Rhodes/U.S. Army)

In the meantime, 18th Airborne Corps boss Lt. Gen. Christopher Donahue will remain in Wiesbaden to continue organizing the training and equipping of Ukrainian forces as the SAGU takes shape.

By establishing a dedicated headquarters focused on Ukraine support, the Pentagon is putting in place an organization to carry out what is expected to be a long-term mission.

The Wiesbaden headquarters is slated to be manned with personnel from across the military branches, making it a joint service operation. Tours are initially planned to last between six months and a year, but longer accompanied tours are also possible.

“It depends on service and individual,” the U.S. military official said. “It’s going to be on a case-by-case basis and not one size fits all.”

U.S. Army Europe and Africa personnel are carrying out the Ukraine support mission in the interim.

Training Ukraine’s military is nothing new for the U.S., which had rotated conventional and special operations troops into Ukraine for years as part of an effort to modernize the country’s military.

But U.S. forces were withdrawn from Ukraine ahead of the full-scale Russian invasion. Since then, American and other allied troops have trained Ukrainian personnel in Germany and elsewhere.

Wiesbaden has emerged as key to the ongoing efforts to get billions of dollars in weaponry into Ukraine, including the mobile rocket system known as HIMARS.

In August, a weapons logistics cell was relocated to Wiesbaden from U.S. European Command headquarters in Stuttgart.

That organization, consisting of dozens of nations, arranges the logistics of getting everything from Stinger missiles and howitzers to drones and long-range artillery to secret locations in Ukraine.