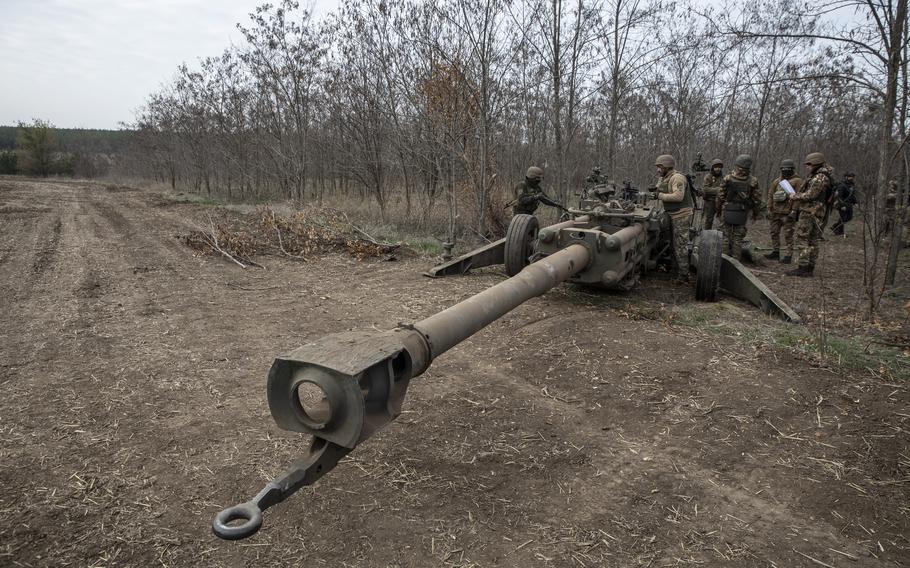 MYKOLAIV REGION, Ukraine — The big gun lay on the ground, quiet and still. But then the radio crackled with target coordinates and the M777 howitzer sprang to life. With the spin of a wheel, its nearly 17-foot barrel swung toward the sky. A Ukrainian artillery unit slid in the first of four shells.

"Cannon!" shouted the squad's commander, nicknamed "Student," putting his hands to his ears.

"Shooting!" replied another soldier as the 35-foot gun erupted with a gaseous gray cloud and a violent kick that dug its metal feet deep into the dirt. About eight miles away, the shell exploded amid a group of Russian armored combat vehicles.

When Moscow ordered its troops to retreat from Kherson city on Wednesday, it marked a stunning setback for Russian President Vladimir Putin, who has claimed Kherson to be part of Russia. And it left Ukraine poised to retake the only regional capital it had lost since the start of Russia's invasion on Feb. 24.

Russia's reported pullback also reflects the latest big battlefield victory for Ukraine, one enabled by precise long-range weapons systems such as the M777s, provided by the United States and other Western allies. After months of being outgunned, Kyiv has gained an upper hand in what is largely an artillery war, and the results are evident all across the southern front. 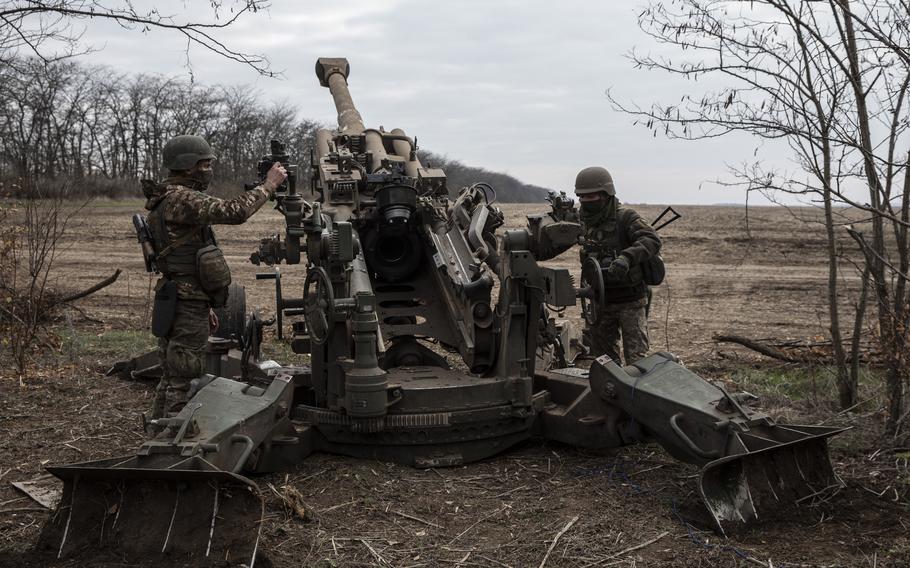 Ukraine has used U.S.-made High Mobility Artillery Rocket Systems, or HIMARS launchers, to cut off Russian troops from their supply lines in the southern Kherson and Mykolaiv regions. It has also used U.S.-provided howitzers to hammer the Russian front line, enabling Ukrainian infantry to liberate a string of occupied towns as they pushed toward Kherson.

"The Ukrainians made a deliberate decision to limit large-scale operations and instead to focus predominantly on artillery and missile strikes," said Konrad Muzyka, president of Rochan Consulting, a military analysis firm based in Poland. "A very wise choice," Muzyka added.

The same mix of Ukrainian infantry and American weaponry is likely to shape the war for weeks to come.

Assuming that Russia's retreat is not an elaborate feint — as some Ukrainians fear — Ukraine could use the same long-range weapons to pin down Russian forces on the east side of the Dnieper River and try to move its forces across from Kherson city, Muzyka said.

Such a push would be risky, but if it happens, the quiet winter many have predicted might instead become loud and bloody.

The United States has sent more than 100 of the M777s to Ukraine since late spring. At that point, Ukraine was almost entirely out of shells for its Soviet-era artillery systems. Soldiers were desperately trying to get their hands on 152mm rounds, often relying on ammunition captured from retreating Russians. 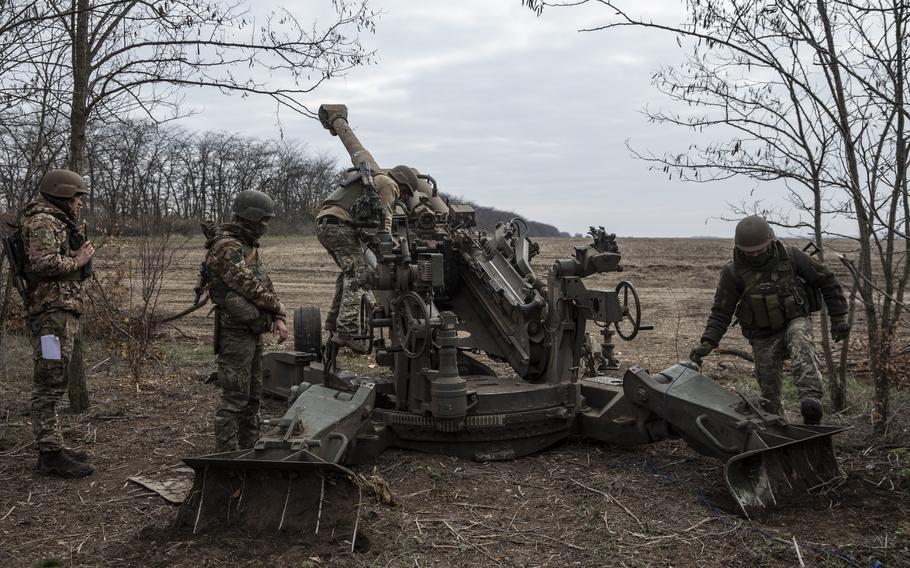 The M777s are more accurate, lighter and more mobile than the Soviet-era artillery used before, the unit commander said. (Heidi Levine/for The Washington Post)

"There were times when we needed to shoot but we didn't have any shells," said a 34-year-old lieutenant from a different artillery battery who goes by the call sign "Bellringer," after the church bells he played before the war. Bellringer and other soldiers spoke on the condition their names not be used to protect their safety and that of their families.

In April and May, some Ukrainian soldiers were sent abroad to be trained on the M777, a much nimbler version of the hulking Soviet "hyacinth" artillery systems they had been using. The "triple sevens," as they are called, fire 155mm rounds including GPS-guided Excalibur shells with a range of roughly 25 miles.

"It's a completely different world," the artillery unit commander who uses the call sign "Student" said of the switch. The tall 27-year-old with a reddish beard had been studying to build automobile engines before the war, hence his call sign. Now he defends his native Mykolaiv region. Moments before speaking to The Washington Post, his division commander awarded him a presidential medal for bravery.

The triple sevens are more accurate, lighter and more mobile than the hyacinths, Student said. However, they are also more prone to overheating and need more careful maintenance than the sturdier Soviet guns.

As Student spoke, the order to fire came in over the radio and the howitzer's nimbleness was on display, going from flat on the ground to aimed and ready in roughly a minute.

The target was a group of Russian combat vehicles near Snihurivka, a town in the Mykolaiv region that is a gateway to Kherson city and the nearby Kakhovka dam, which Ukraine and Russia have accused each other of plotting to destroy.

Student's artillery unit rattled off four rounds in roughly 90 seconds. Yevhen, the division commander, who asked that only his first name be used, said his batteries had been busy. Some days, an individual howitzer fires more than 100 rounds. 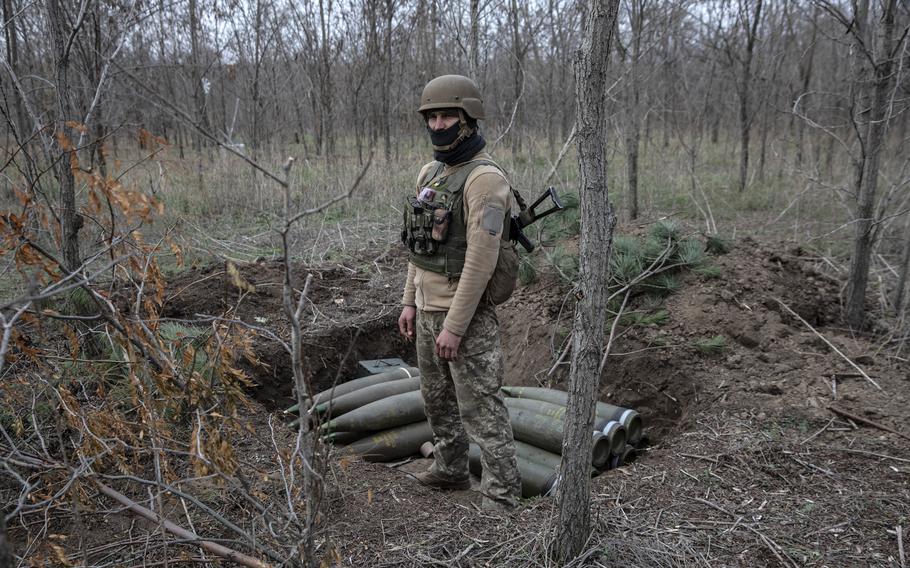 A soldier from the Ukrainian artillery unit stands near a cache of shells. (Heidi Levine/for The Washington Post)

Their impact is unmistakable.

The big guns had helped liberate two villages the day before, Yevhen said. And not long after Wednesday's barrage, Ukrainian forces moved into Snihurivka. On Thursday, Ukrainian soldiers recorded a video saying they had liberated the town.

There were other signs Wednesday of the fierce fight near Snihurivka. Ukrainian HIMARS launchers left long, white trails in the sky. A pair of fighter jets screamed in the distance, letting off orange flares to avoid being shot down.

During a visit Saturday to the front line in the Kherson region's southwest, not far from Mykolaiv, soldiers from the 59th Brigade said the enemy was well prepared.

The terrain was an unforgiving expanse of wheat and sunflower fields, with irrigation ditches that give the Russians ready-made fortifications, said Lt. Col. Maksym Bohachuk, 29, a history teacher who is now a battalion commander. The web of concrete-lined ditches extended to Snihurivka, roughly 30 miles away.

"They are digging in here," Bohachuk said. "They are broadening their positions, bringing in new people." 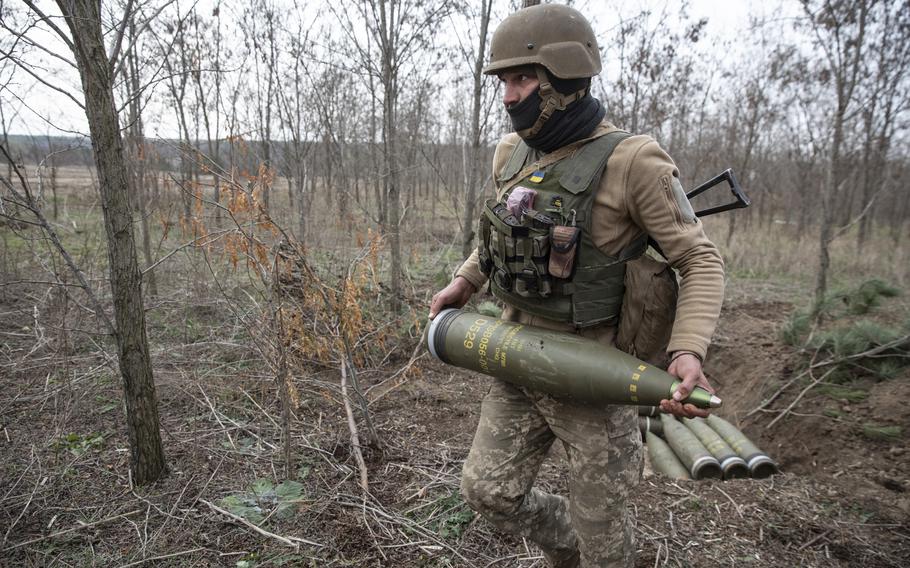 The soldier moves shells as his unit prepares to fire an M777 howitzer at the Russian armored vehicles. (Heidi Levine/for The Washington Post)

Bohachuk estimated that a little more than a mile from his front-line troops were about 500 enemy soldiers, some who seemed to be recent conscripts, with tanks and artillery.

"To push forward on our lines, it is not enough," he said of the enemy. "But to hold us back, it is."

That stasis was evident in the trenches, where two Ukrainian soldiers peered at their adversaries through binoculars. The line effectively had not moved in more than two months, they said.

Mortar rounds exploded and gunfire crackled in the distance, but the soldiers didn't seem to care. When the mortar rounds drew close enough to hear their whistle, they scrambled into trenches for cover.

Bohachuk said that Ukrainian soldiers had heard rumors the Russians were withdrawing from Kherson city, but that he didn't believe them. "They are lying to provoke us into moving forward so they can entrap us and beat us down," he said.

Even when the front line hasn't moved, the U.S.-provided howitzers have helped the Ukrainians by keeping the Russians from having their own, shorter-range artillery at the front. That has reduced Ukrainian casualties, which Muzyka said were still heavy in the Kherson region.

"I can't say they have changed the course of the fight," Bohachuk said of the howitzers, "but they are speeding up our victory."

Shortly after Wednesday's barrage, Yevhen pulled out his iPhone to play a video from the day before of the damage the howitzers can inflict. It showed a convoy of Russian vehicles, one of which suddenly disappeared in a cloud of smoke and dust.

"The shrapnel went through it," he said with satisfaction. "Like butter."

The Washington Post's Isabelle Khurshudyan and Kamila Hrabchuk in Kyiv contributed to this report. 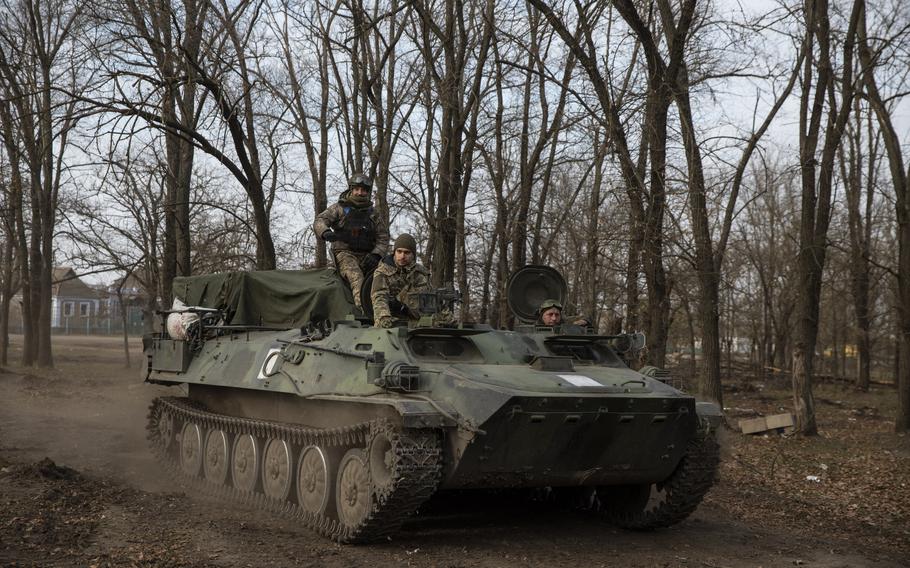 The Ukrainian military in the southern Mykolaiv region on Wednesday. (Heidi Levine/for The Washington Post)