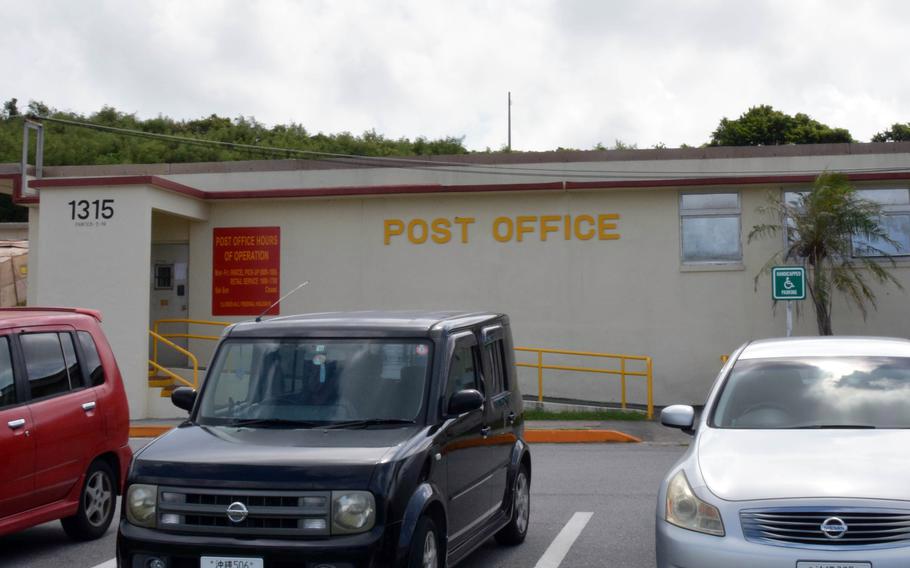 The post office at Camp Kinser, a Marine Corps base on Okinawa, is pictured in May 2022. (Frank Andrews/Stars and Stripes)

CAMP FOSTER, Okinawa — A Brazilian woman living in Yokohama was sentenced last week to five years in prison and fined about $10,000 for her involvement in a ring that smuggled illegal narcotics into Japan through the U.S. military postal system on Okinawa, according to Japanese prosecutors.

Rebecca Yamada Travaglia, 25, was charged in September and November 2021 in Naha District Court with possession of a kilogram, or 2.2 pounds, of cocaine, over four grams of amphetamine pills and just over a half-gram of liquid cannabis, a spokeswoman for the Naha District Prosecutors Office told Stars and Stripes by phone Thursday.

Court documents rendered Travaglia’s name only in Japanese katakana characters. Travaglia is a translation of those characters.

According to prosecutors, Travaglia, unemployed at the time of her arrest, was one of nine people tied to a smuggling ring run by a Japanese citizen, Ken Kominami, with no known address. Kominami was sentenced Sept. 30 to 13 years in prison. He is appealing his sentence, a Fukuoka High Court spokeswoman told Stars and Stripes on Oct. 13.

Travaglia pleaded not guilty at trial and said she had been unaware she was carrying drugs, the Okinawa Times newspaper reported Wednesday. Judge Hironobu Ono found her guilty at a Nov. 22 hearing, the spokeswoman said. She said Travaglia has appealed her sentence.

The drug ring ensnared one Marine and a Marine Corps civilian employee who were sentenced to prison in separate cases in Naha late last year and early this year.

Cpl. Nicholas Garner received two years in prison and an approximately $4,000 fine on Feb. 18 for a conviction of receiving a half-gallon of cannabis liquid and nearly a quarter-pound of dried cannabis flower by mail.

Civilian employee Dominique Williams was sentenced Dec. 16 to four years in prison and fined approximately $9,000 for receiving over four pounds of cocaine in the mail, the spokeswoman said.

The date of Travaglia’s arrest and first court date were unavailable Monday. She was charged in Naha District Court on Sept. 16, 2021, with violating Japan’s Narcotics and Psychotropics Control Act, the Stimulants Control Act and the Cannabis Control Act. She was subsequently charged Nov. 24, 2021, with several special provisions related to drug smuggling, the spokeswoman said.

Kominami was first arrested in October 2021 after Japanese police were tipped off to a potential drug-smuggling ring by the U.S. military, a police spokesman told Stars and Stripes last month.

The ring reportedly received through base posts offices on Okinawa approximately five pounds of cocaine, two liters of cannabis liquid and nearly four ounces of dried cannabis flower from unnamed individuals in the United States.