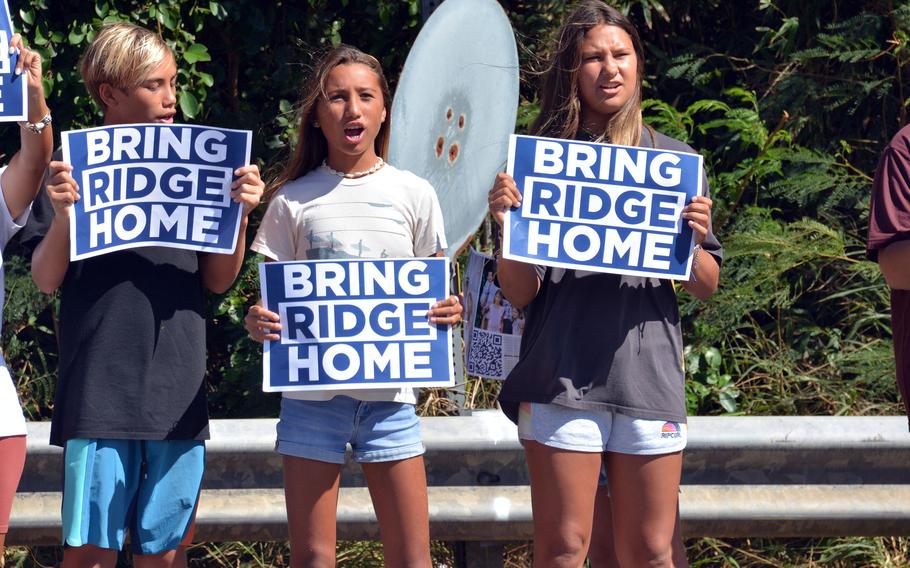 Supporters of Lt. Ridge Alkonis plan to protest from 10 a.m. to noon outside the Japanese Embassy in Washington D.C., and at 17 other Japanese consulates across the country, according to the Bring Ridge Home and Alkonis supporter Andrew Eubanks’ accounts on Twitter.

“Join us as we protest the wrongful imprisonment of Lt. Ridge Alkonis and call for his return to the U.S.,” the Bring Ridge Home page tweeted Thursday night.

Alkonis’ wife, Brittany Alkonis, who returned to the U.S. from Japan on Thursday, is joining the protest in D.C. Eubanks tweeted that day.

However, it’s unclear whether Biden and Kishida plan to discuss Alkonis’ case. White House National Security Council spokesman John Kirby, in a Thursday press briefing, said he wouldn’t preview or get ahead of the specific agenda.

“We, certainly the president is aware of the lieutenant’s circumstances in Japan, as is leadership across the military in the Defense Department,” Kirby said at the briefing.

Neither Eubanks nor Jonathan Franks, the Alkonis family’s spokesman, responded to requests for additional comments by Friday in Japan.

Alkonis, 34, of Claremont, Calif., was convicted in October 2021 by the Shizuoka District Court of negligent driving causing the deaths of two people and injuring a third in May 2021.

A weapons officer formerly assigned to a destroyer at Yokosuka Naval Base, Alkonis was driving his family through Fujinomiya after a trip to nearby Mount Fuji when he fell unconscious and crashed into the victims outside a soba restaurant.

The protests Friday follow Congress’ approval Dec. 23 of the $1.7 trillion federal spending bill, which authorized payment of Alkonis’ pay and benefits during his incarceration, according to Sen. Mike Lee, a Utah Republican. Lee sponsored the Alkonis amendment after the Defense Department refused Alkonis’ requests.

Alkonis’ prosecution gave rise to a movement aimed at having him returned to the U.S. A petition launched June 6 on Change.org has garnered nearly 85,000 signatures.

Supporters allege Alkonis’ rights under the U.S.-Japan status of forces agreement were violated, that he was treated unfairly by the Japanese legal system and received excessive punishment.

“A country claiming to be a U.S. ally – and benefitting from a sizable U.S. military presence in that country – has imprisoned a U.S. Navy officer under circumstances that essentially NEVER result in prison time for its own citizens,” Lee tweeted on Friday.

Alkonis’ three-year prison sentence is a statistical outlier. In 2020, 1,071 people were convicted of negligent driving resulting in death in Japan.

Of those, 70 were sentenced to prison time while 1,001 were given a suspended sentence, according to a December 2021 white paper from Japan’s Ministry of Justice.

Alkonis testified in October 2021 that a primary doctor and a neurologist at Yokosuka diagnosed him with acute mountain sickness, a result of his descent from Mount Fuji’s 5th Station at an altitude of 7,847 feet, according to a trial observer report released earlier this month by the secretary of the Navy. Alkonis remained at the 5th Station for approximately one hour, according to his testimony.

At trial, Alkonis said he should have stopped his vehicle when he “felt something wrong with my body”; he answered “yes” when asked by his defense attorney if his negligence caused the incident, according to the trial observer report.

The diagnosis of acute mountain sickness, however, is questionable, according to Dr. Peter Hackett, a clinical research professor with the Altitude Research Center at the University of Colorado. He said the condition is the most common and least serious of altitude-related illnesses and cannot result in fainting or loss of consciousness.

Due to Alkonis’ relatively brief exposure to high altitude, Hackett said his opinion is that the fainting was likely caused by some other issue.

The Defense Department, U.S. Navy and the Japanese government have denied requests from Stars and Stripes for copies of the medical reports and other documents related to the Alkonis case.